Strong performance in the U.S. stock market helped Wellesley’s endowment reach $1.8 billion by the end of fiscal year (FY) 2014 on June 30. Standard and Poor’s 500 stock market index increased by around 20 percent. The endowment’s recent market value exceeds the value of $1.657 billion recorded prior to the 2008 financial recession at end of FY 2007.

The real rate of return was 16.7 percent since consumer price inflation was 2.1 percent. Like Wellesley, many other schools have seen their endowments recover from the shock of the recession and reach new record values.

According to National Association of College and University Business Officers (NACUBO), higher education endowments have experienced an 15.6 percent average rate of return this past fiscal year based on preliminary data released by 426 colleges and universities in October. The preliminary average rate is up nearly four percent from the average of 11.7 percent return rate in FY 2013. The final data and results of how well higher education endowments have performed will be released in late January from more than 800 schools.

“We expect that our return was very competitive but also acknowledge that for institutions with long horizons, a single year’s performance is not especially important,” Chief Investment Officer Debby Kuenstner said.

In the investment market, Wellesley performed stronger than Harvard, which earned an investment return of 15.4 percent, but followed behind Yale with a 20.2 percent return as well MIT and Dartmouth, each of which earned a return rate of 19 percent. But as liberal arts college, Wellesley has a smaller endowment size from larger schools like Yale, Harvard and MIT.

According to Kuenstner, schools with more sophisticated endowments, which  include more venture capital and private equity investments, performed better than schools with endowments comprised of more traditional investments.

The College’s endowment also surpassed the 8.1 percent required rate of return set by the Board of Trustees and administration for FY 2014. The required rate of return is the ratio of Wellesley’s expenses for the year out of the starting value of endowment and also accounts for inflation. In FY 2014, the College’s spending rate was 5.1 percent of the starting value of its endowment while the inflation rate was 3.0 percent, as calculated by the Higher Education Price Index.

When the endowment misses the required rate of return, the revenue cannot adequately cover the entire spending rate, which means that the institution must draw from other sources of revenue.

“Because capital market returns aren’t smooth, we recognize that some years we will fall short of the required return and some years, like FY14, when we exceed it,” Kuenstner said. “What matters is the trend over time.” 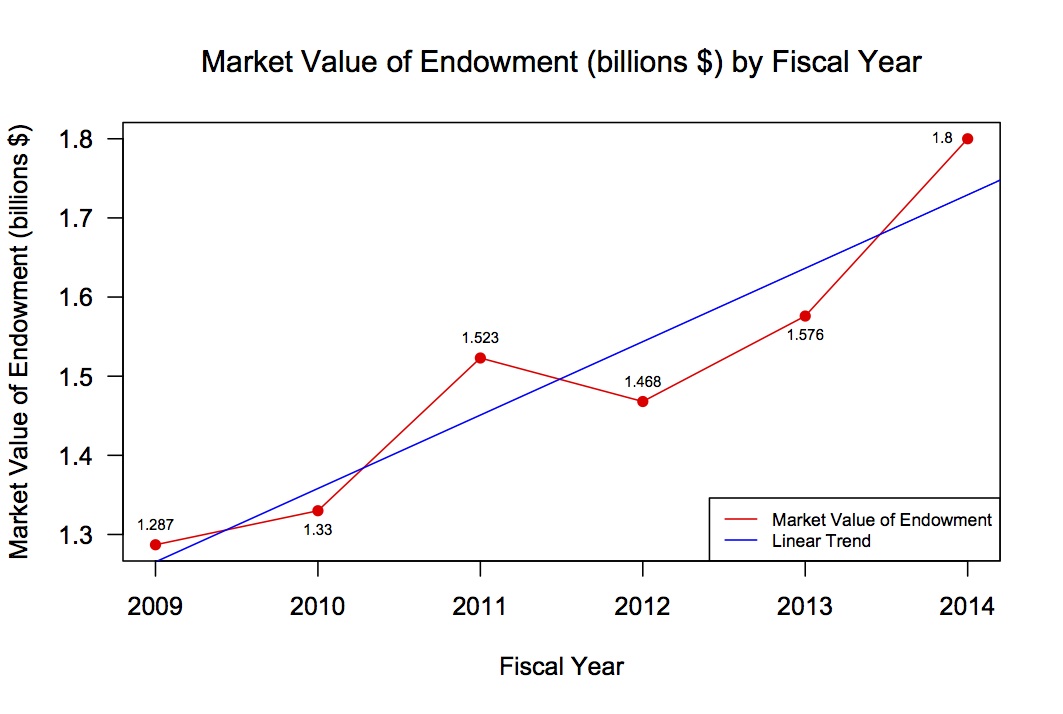 The Investment Office expects the endowment to generate an inflation adjusted average return of 4.75 percent over the next five to seven years. The expected return rate is low because the stock market is highly volatile. The Investment Office does not expect to earn a high rate of return every year, despite having earned an 18.8 percent return this year.

“This real return reflects the low level of interest rates and relatively high equity market valuations, both of which suggest that future returns will be below historical averages,” Kuenstner said.

Despite significant growth, the endowment returns of the past fiscal year have a relatively small impact over the College’s spending budget.

The endowment’s market value from the last three years multiplied by the targeted spending rate of 4.25 percent determine the 20 percent of the following year’s budget. The previous year’s expenses adjusted for inflation determine the remaining 80 percent to ensure that support for the endowment doesn’t face sudden changes caused by a highly volatile stock market.

The budget must adjust for long term market trends for more predictable spending. While higher education endowments in FY 2013 showed a strong return rate of around 12 percent on average, as NACUBO has listed, these endowments experienced a slight negative return of 0.3 percent in FY 12, according to Inside Higher Ed.

About three quarters of American schools aim for spending rate of around 5 percent, while experts insist that a college’s endowment must have a return rate of seven percent to survive.