Themes of community and collaboration were at the forefront of the HPC-CG debate on Thursday, April 2. The debate, co-hosted by House President’s Council (HPC) and College Government (CG), centered around residential life and how CG can expand its relationship with HPC. This was the first of two debates held during College Government election week, as opposed to the three debates held in previous years.

The decision to combine the HPC and CG debate was influenced by the overextended running time.

“Last year’s election featured 5.5 hours of debates, largely attended by the same people. The reconceived HPC-CG debate is meant to introduce the candidates to the campus in the widest possible sense, with the MPC [Multicultural Presidents’ Council] debate and the Candidate Crawl serving as forums to directly address questions of diversity, inclusion and residential life,” CG President Hana Glasser ’15 said.

Six of the eight positions on College Government Cabinet are uncontested. Both the College Government President and Director of On Campus Affairs (DOOCA) position have two candidates. The Student Leadership Stipend is the lone Ballot Initiative candidate.

Each candidate delivered a two-minute introductory statement before answering general and position-specific questions. Lastly, they addressed the audience’s written queries.

When asked about the meaning of community, both candidates for College Government President (CGP) emphasized the importance of being present in the community, reflecting on their respective experiences as Resident Assistants. Adeline Lee ’16 discussed the importance of self-reflection and being accountable to the Wellesley community, alluding to her proposals of the inclusion of a shuttle for students to access mental health resources outside campus and the expansion and diversification of current courses to better support students returning from a leave of absence. Charlotte Harris ’16 attributed her personal growth to her involvement in

organizations like the swim team, the Center for Work and Service and the Alpha Phi Sigma society. Harris emphasized the importance of safety and feeling connected to the community, advocating the inclusion of athletic organizations in CG.

A common thread among the candidates’ platforms was their advocation of student polls to gauge student opinion and solicit feedback on how to improve the effectiveness of College Government. Chief Justice candidate Mayanka Kumar ’16, DOOCA candidates Meredith Ausenbaugh ’16 and Ali Robinson ’16 and Committee for Political and Legislative Awareness (CPLA) candidate Zainab Younus ’17 discussed distributing student polls to increase participation in their respective committees. Younus also addressed the need for CPLA to stay involved in campus politics and to balance CPLA’s emphasis on topics of a national and international scope throughout the year.

Anonymity was also a salient issue that was addressed due to the increased presence of the mobile application YikYak on campus. While Lee did not recognize it as an official source of information and encouraged in-person dialogue, Harris advocated YikYak as a forum for students to voice concerns anonymously that could be addressed in Senate.

Kumar weighed in on anonymity from the Honor Code Council’s perspective, noting that the application broached campus issues related to the Honor Code like hazing. Chair of Communication and Finance, or Secretary-Treasurer, candidate Jessica Shin ’18 advocated the application’s ability to allow students to say what they might not say in person and discussed her plan for a Q&A on CG’s website as another means for students to voice their concerns. Shin also emphasized making Senate a more legitimate forum of discussion by inviting parties like the Board of Trustees to open meetings and encouraging cultural organizations to send their own representatives.

The candidates also answered questions about how their role could be integrated with residential life and HPC. Robinson, a former Bates Hall RA, emphasized the need to prioritize student safety during SBOG events and increase the number of events on the east side of campus, which has several underutilized spaces. Ausenbaugh, a three-year resident of Stone-Davis, mentioned that East Side is underappreciated and suggested implementing a SBOG-House Council liaison for each hall.

“We are hosting this debate to make sure all CG candidates have multicultural competency and hopefully give them a chance to shine,” Boatwright said.

The MPC debate had the same structure as the earlier debate, beginning with a question the candidates had been given previous access to before segueing into questions for all the candidates for each position and audience queries.

Throughout the debate, all of the candidates touched on the need to value others’ different experiences and the concept of allyship, or advocating on behalf of individuals and groups to make their voices better heard. They also elaborated on how the racial, gender, ethnic and socioeconomic diversity of Wellesley influenced their own personal growth and the salient campus issues of our day. Both DOOCA candidates emphasized the importance of connecting SBOG to the entire campus as a resource.

When asked how people who feel excluded from the Wellesley community because of their identity can be made more welcome by Cabinet, the candidates offered differing perspectives. Kumar, Harris and Lee encouraged opening forums for the entire campus and establishing open dialogue as the shared expectation of the community. Lee also encouraged adding institutional practices to support incoming trans women and maintain the concept of sisterhood. Ausenbaugh referred to her plan to appoint a Multicultural and Student Body Liaison and Robinson emphasized using SBOG as a tool to help struggling student organizations. Younus suggested expanding the guidelines of creating a safe space that CPLA uses to encompass the entire campus. 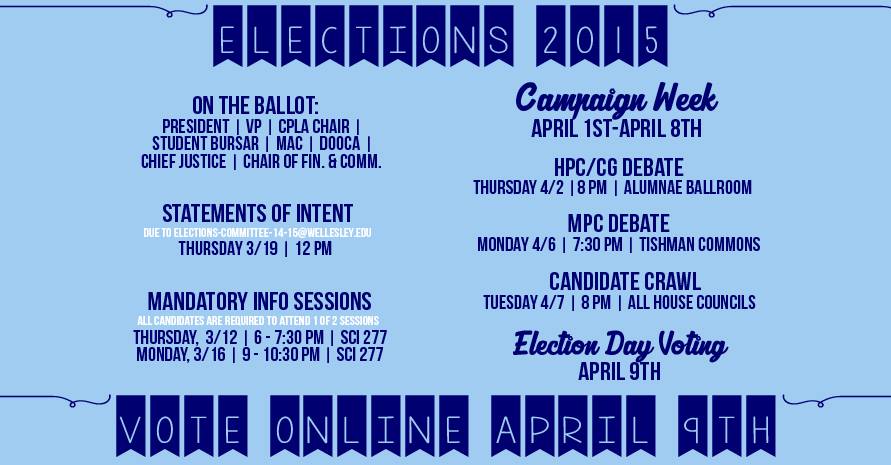 Another pertinent issue broached in the debate was how Cabinet should help administration and faculty address student needs after tragedies that affect many students with close racial and religious ties to these events. Van de Walle suggested emphasizing the implications of international tragedies. Shin suggested using initiatives like this year’s Imposter Syndrome Talkback series as a model to respond to national and international tragedies. Kumar proposed diversity training for administration.

The candidates also discussed their vision of how Cabinet could interact with the newly established Commission on Race, Gender and Equity. Ghemawat emphasized communicating with multicultural organizations and the MPC as well as recruiting more faculty members. Harris emphasized helping more Wellesley minority faculty members earn tenure. Lee discussed the need to involve alumnae in discussions about these crucial issues.

After the debates, the candidates elaborated on their visions.

Harris is running for CG President because of her experience as College Government Vice President (CGVP) and the inspiration of other student leaders. She maintains that creating a positive and fun culture is a crucial component of a thriving community and wants to bring Stone Center counselors to organization and team meetings. Harris aims to raise Senate’s standard of accessibility and increase its legitimacy as a forum for dialogue.

Harris continued her theme of accessibility when discussing her goals for Cabinet.

“I would like to ensure that Cabinet is viewed as a productive and transparent group, which will encourage more students to engage with CG in the future,” Harris elaborated.

Lee is running for CG President because she believes Wellesley students have an obligation to be lovingly critical of their community and constantly strive to improve it.

“I see it as the CG President’s role to not only work toward an expansive vision for the College but to also dedicate time toward facilitating smaller logistical details so that all those expansive ideas can cohere,” Lee elaborated.

Lee intends to set a strong precedent in establishing a standard of face-to-face communication and mutual respect. She met with students for 12 hours during her campaign to answer their queries and had discussions with four Wellesley administrators about how to facilitate the transition to the next Cabinet. Lee intends to work with LTS to expand eBook offerings and help the college’s financial organizations release a financial handbook for the class of 2019 to teach them about budgeting in college and campus resources.

Chan’s decision to run for CG Vice President was influenced by her desire to give campus organizations increased support by providing them with more access to resources.

“I believe that organizations are important in fostering a sense of community and belonging in Wellesley,” Chan explained.

As CG Vice President, Chan intends to increase the social media presence of The Student Organizations and Appointments Committee (SOAC), hold joint CG committee meetings and hold office hours before important organizational deadlines. She also encourages SOAC to publicize a Committee of the Month to educate the community about various CG resources.

Robinson is running for DOOCA because of her heavy involvement in SBOG committees and campus initiatives like the House Presidents’ Premixer, which encourages student safety. She also prioritizes student voices and diversity when planning events.

Robinson distinguished herself as someone who sees the large reverberations that can result from small changes in SBOG.

“Inviting a group to a meeting or having a table set up at an event has the potential to change campus attitudes as well as provide many more resources than SBOG has available within itself,” Robinson noted.

Heavy involvement in SBOG led Ausenbaugh to run for DOOCA. She underscored her proposed polling system as a way to respond to the needs of the Wellesley community and gauge student interest in SBOG events. Ausenbaugh plans to expand the physical, mental and emotional accessibility of SBOG events.

Ausenbaugh noted that a DOOCA should communicate with all parties involved when planning events, take logistical considerations into account and make SBOG a more active part of students’ lives.

“I think a legacy has been left this year to be more involved with the community on social media. I want to take that a step further and make sure that SBOG creates one-on-one connections with Wellesley,” Ausenbaugh remarked.

Van de Walle is running for Student Bursar because of her extensive experience as a bookkeeper in the Bursar’s Office. She plans to institute a new treasurer training system to increase the office’s and treasurers’ accountability and help organizations fill out forms more efficiently. She is also creating a forum for students to learn about and express their concerns about organizational funding and intends to continue giving organizations with a lack of funding access to a Bursar credit card.

Van de Walle hopes her successor keeps these changes in place and builds on them.

“These changes can set a precedent for open communication and conversation between the funding trifecta — SOFC, the Bursar’s Office, and the Treasurers — as well as the rest of the campus,” Van de Walle expressed.

Kumar’s positive experience with the Honor Code helped her find a home at Wellesley, which led her to run for Chief Justice. She wants each residential hall to have a clear go-to person for potential Honor Code infractions. Her summer internship with The Walker School taught her the importance of having dependable people and institutions in the community.

Kumar desires for the campus to gain a more robust conception of the Honor Code.

“I want more people to recognize that the Honor Code can strengthen the bonds of our community in ways that encourage us to support, respect and learn from one another. Instead of the Honor Code being solely associated with academic cheating or underage drinking, it should be seen as a way of promoting honesty, trust and genuine concern for one another,” Kumar wrote.

Ghemawat attributed her decision to run for MAC to the many students who told her they could not find their own niche at Wellesley. She emphasized the need to create an environment that encourages open conversation and dialogue about complex and personal issues and explained that all the parties involved need excellent listening skills.

“In order for students to feel like they belong at Wellesley and feel safe here, we need to be able to converse openly and learn and grow from each other,” Ghemawat explained.

The candidates visited all the House Councils from 8 to 10 p.m. on Tuesday, April 7 during the Candidate Crawl. Voting for College Government Elections will occur from 8 a.m. to 8 p.m. tomorrow, Thursday, April 9. The current Cabinet and candidates strongly encourage Wellesley students to vote and maintain last year’s 80 percent voter participation rate.