On Friday, April 6, President Kim Bottomly announced that Dean of Students Debra DeMeis will be retiring from Wellesley College after a tenure of seven years to join the consulting firm Cambridge Hill Partners.

In 2008, DeMeis made the momentous decision to come to Wellesley because of the school’s commitment to women’s education.

“A Wellesley student summed it up best when she said that she came to Wellesley because it would be one of the few times in her life that she would be surrounded by so many smart, amazing women,” DeMeis said, citing the school’s top-notch academics and incredible experiences outside the classroom as reasons for Wellesley’s status as the premier college for women.

DeMeis arrived at Wellesley during a difficult time. She started her position as Dean of Students during the 2008-09 academic year, when the recession began. Because of the economic crisis, DeMeis had to institute financial changes to ensure that the College maintained the trust of its students and the wider Wellesley community.

Despite the challenges of beginning her new job during trying times, DeMeis remembers her time here with fondness.

“I have loved my work at Wellesley because Wellesley thinks big; whether the conversation is about massive open online courses (MOOCs) or Campus Renewal or First-Year Seminars, our primary interest is to ask how we can make the best and and widest impact possible,” said DeMeis.

She underscored the need for Wellesley to stay in sync with its primary mission: to educate women in depth and breadth to enable them to improve the world.

When asked about some of the best experiences she had at Wellesley, DeMeis pointed to a series of firsts, citing her initial experiences with Flower Sunday, the Tanner and Ruhlman Conferences and Marathon Monday as particularly meaningful. She also pointed to her first Halloween party at her house as another memory she will always cherish.

While at Wellesley, DeMeis has been involved in a number of initiatives. She led the effort to create the Office of Intercultural Education in 2010, helped improve the Wellesley Plus program and pushed renovation planning for the Stone Center and Simpson Infirmary. Some of her priorities have included spearheading diversity initiatives at Wellesley, which have improved the educational experience of first-generation college students by hosting a national conference focusing on their experiences, and supporting wellness in every form through the Stone Center renovations and talkbacks. Much of her time here has been focused on Campus Renewal, and she cited discussions about how residences play a crucial role in the life of the Wellesley community as an ongoing learning experience.

DeMeis noted that she would especially miss the Wellesley community and its individual members.

“My conversations with students constantly remind me of just how exceptional they are as they share their latest travels, interests, research projects, plans and hopes for the future with me. I have had the opportunity to work with faculty and staff, including past and present Senior Staff colleagues, who come from departments and offices across campus and care deeply about this place and its mission,” DeMeis replied, also thanking her colleagues in Student Life for teaching her about Wellesley.

To ease the transition to a new Dean of Students, President Bottomly has appointed a group that would select an interim dean. DeMeis expressed confidence in the ability of the appointed members to choose a suitable interim dean who would continue leading initiatives that are beneficial for Wellesley students. She believes that the creation of the Commission on Race, Ethnicity and Equity (CREE) is a key step in the right direction and hopes that her successor will continue to bolster this initiative. She wishes for CREE itself to continue creating dialogue on campus in a space that allows for the civil exchange of ideas and more understanding between differing students and groups.

In addition, DeMeis hopes that her successor will continue to focus on Campus Renewal.

“Campus Renewal should ensure that Residence Life continues to be a signature of a Wellesley experience,” DeMeis said, underscoring the fact that many Wellesley students form small communities within their residence halls.

Many Wellesley students expressed a combination of sadness and surprise when they read that DeMeis will retire from Wellesley. However, they uniformly expressed having excellent experiences with her and wish her the best as she joins Cambridge Hill Partners. 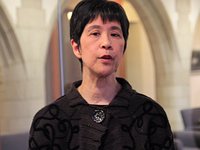 Chief Justice Katherine Tran ’15 has many favorable memories of DeMeis through working with her on the Honor Code Council.

“Dean DeMeis exemplifies leadership in so many different capacities. Her mentorship is extremely valuable to me, and it has helped me steer Honor Code Council this year. In keeping alive the vigor of Honor Code Council, we affirm our dedication to the Honor Code, which certainly shapes our campus culture,” Tran said.

Tran also touched upon a more personal side of DeMeis, who wears many hats as an advocate for various campus initiatives.

“I have truly enjoyed knowing Dean DeMeis as a person. She has a very energetic and funny dog. She tells me interesting nuggets of information such as how tulips, when placed in water, are one of the few flowers that continue to grow even after they are cut. She gives great advice on communicating effectively with colleagues and friends in difficult dialogues. Basically, we are lucky to have had her here,” Tran said.

While Wenyan Deng ’15 never worked with DeMeis in a formal capacity, she was inspired by her.

“I remember that her speech on my first day during international orientation at Wellesley struck me as very thoughtful and articulate. I remember thinking, ‘This is why I came to this school, to be with intelligent and open- minded people like Dean DeMeis,’ ” Deng said.

Hana Glasser ’15 first learned about DeMeis before attending Wellesley. Her pharmacist’s wife had studied for her Ph.D. with DeMeis in West Virginia. Glasser noted that DeMeis served as an important mentor to her throughout her time at Wellesley as a student and member of College Government.

In particular, Glasser applauded DeMeis for emphasizing student wellness and care for students.

“Dean DeMeis has always made herself available for me to discuss student concerns with care and thoughtfulness. She also has self-care as a real core mantra and has made sure that me and other students prioritize our well-being,” Glasser explained, adding that she wishes DeMeis success and happiness in her next position.

Professor of Art Phyllis McGibbon worked with DeMeis on the Campus Renewal campaign and calls her an important member of the initiative. She said that the position of Dean of Students is a key one because of its vital role in spreading information around campus, communicating with the Wellesley community and making sure productive conversations occur. McGibbon is saddened to see DeMeis leave in a sea of administrative changes in administration during the implementation of Campus Renewal and wished her successor the best of luck in continuing crucial Wellesley initiatives.

DeMeis’s last day at Wellesley is slated to be July 1. President Bottomly hopes to be able to announce the Interim Dean soon.

Danni Ondraskova ’18 is the News Editor who plans to major in Russian Area Studies and International Relations with a concentration in politics or economics. She loves rereading Anna Karenina and listening to Romanian House music. She can be reached at dondrask@wellesley.edu.