Members focus on collaboration and transparency

As the new school year begins, Wellesley’s 2015-2016 College Government Cabinet begins their tenure with goals of increasing communication and collaboration across campus. The nine elected members of College Government work with student organizations, administration and Senate committees to hold events, as well as serve as the intermediary between students and the administration.

College Government President Adeline Lee ’16 presides over weekly Senate meetings attended by student representatives from each of Wellesley’s residence halls and student organizations. This year, Lee aims to open  lines of communication on campus regarding sensitive issues such as mental health and socioeconomic status, especially mentioning the lack of safe discussion spaces available on campus.

“I see purposeful, targeted conversations as one of the best ways to help make that happen. There are few spaces on Wellesley’s campus that we, as students, can visit to get a true sense of our community pulse, where our student values lie,” Lee stated.

She went on to express her belief that Senate is the right medium for these conversations, which can create openness in the college community.

“It is attended widely by our administrators as well as the very constituents and leaders of our own diverse campus communities. What better space to discuss as well as effect change than a space such as Senate?”

Secretary-Treasurer Jessica Shin ’18, who records minutes during Senate and presides over College Government’s Communications Committee, advocated  similar ideas about the importance of conversation among students.

“I wish to see more voices and opinions heard at our weekly Senates, to the point where rows of bodies fill the seats in the Academic Council Room,” Shin said.

Director of On Campus Affairs Meredith Ausenbaugh ’16, who is in charge of planning Wellesley events during the year and oversees College Government’s Schneider Board of Governors (SBOG), shares similar sentiments and wants to reach out  to the student community.

“When planning Fall Frenzy, Marathon Monday or our concerts this year, we want to hear from you. I hope to make our Board [SBOG] more porous through a polling system and collaborating with different organizations and groups around Wellesley to showcase our student talent,” Ausenbaugh remarked. 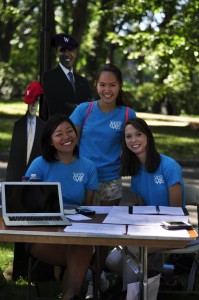 The College Government Cabinet also communicated its desire to have greater community participation and engagement in making decisions. Collaboration was a central theme expressed by several members of College Government when they discussed their hopes for the upcoming academic year.

“I hope to continue to strengthen and build our Wellesley community through communication, collaboration and support,” Chan remarked.

Chan went on to emphasize the need for different types of on-campus organizations to be able to work together and use each other as resources. She plans on building relationships between organization presidents by hosting collaboration events.

“I will achieve this by revamping  President’s Training to focus on having presidents get to know each other and brainstorm ideas for joint events,” Chan said.

Similarly, Committee for Political and Legislative Awareness (CPLA) Chair Zainab Younus ’17, who coordinates on-campus political eventsand serves as a non-partisan liaison between politically-oriented groups, echoed her campaign’s platform when she expressed a desire for greater accessibility among organizations. Younus aspires to see more partnerships in the future, especially with Residential Life staff, to increase voter participation

“I hope to partner with House Councils and House Presidents to establish dorm voter registrations that will be organized by the respective dorm representative to CPLA,” she explained.

The issue  of transparency was another  high priority for many members of the College Government Cabinet.

“In my opinion, transparency means that students and faculty understand how the Honor Code functions on this campus and the role of the Honor Code Council as a resource,” Kumar elaborated.

Furthermore, she expressed her hopes that the processes and policies associated with the Honor Code would  be made more public through community conversation.

“I plan to achieve these goals by holding several education talks throughout the dorm neighborhoods. These education talks will be open to all students and we will discuss how to file a charge, hearing procedures, resources and appeal processes,” Kumar explained, adding that she hopes to better educate faculty members about the Honor Code.

Weekly Senate meetings are held from 6-7 p.m. in the Academic Council Room, located on the fourth floor of Green Hall. All students are welcome and encouraged to come.