Research has recently been released on the influence of the shadow grading policy on the Class of 2018.

The College implemented shadow grading in the fall of 2014 and will continue to for four years with each incoming class. If the policy is successful, Wellesley’s Committee on Curriculum and Academic Policy (CCAP) will vote to extend the policy to future classes in the spring of 2018.

Under the policy, first semester first-years’ letter grades are submitted to the Registrar for internal use and are not released outside Wellesley College. The fall letter grades are converted into shadow grades that appear as Pass/No Pass on official transcripts, with passing grades as D’s and above.

Akila Weerapana, economics professor and Pforzheimer Learning and Teaching Center faculty director, has been conducting research and found that the Class of 2018’s first semester grade average was about a third of a letter grade, or .114 grade points, lower than their predecessors. The sciences experienced the largest grade reduction while the social sciences were relatively unaffected, according to his research.

The Office of Institutional Research administered two surveys through email to the Class of 2018 at the end of each semester asking individual students about their experiences. The December 2014 survey received 405 students responses, and the April-May 2015 survey garnered 270 responses.

The first survey found that shadow grading encouraged first semester first-years to stay in courses in which they expected to earn lower grades.

An overwhelming majority of respondents in the December 2014 survey felt that the policy made their transition into college easier. About 94  percent of students were more likely to stay in a challenging class because of shadow grading. The Fall 2014 semester saw a nearly 50 percent decrease in dropped courses compared to past levels.

One topic researched through the Spring 2015 survey was how first semester grades influenced students’ later decisions. A slight majority said their choice of second semester courses was not influenced by their first semester grades. Most students continued to take courses that were intellectually challenging. Many students continued in departments in which they had received lower grades and did not reconsider fields they were interested in majoring in. 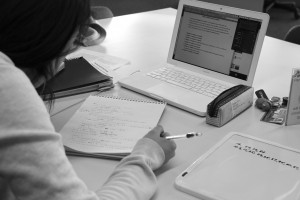 According to the Spring 2015 survey, shadow grading played a key role in influencing how first-year’s spent their time. The survey found that students spent much more time studying and developing effective study habits during the second semester. Many students spent less time with friends, engaging in recreational activities and participating in extracurricular activities during the spring semester.

The surveys let students anonymously comment on how shadow grading affected them. Many who had a satisfactory experience with the policy report being grateful for having a safety net that enabled them to make adjustments to college.

“It took me a while to learn how to manage my time and make the transition, and shadow grading helped me focus on long term goals. As a result, even though I’m taking harder and more time-consuming classes than I was last semester with about the same amount of extracurricular commitments, I’ve been getting better grades this semester,” one student from the Class of 2018 wrote.

Student concern about the policy centered on how shadow grades would affect their internship and graduate school applications, with some expressing frustration about their inability to voluntarily show their shadow grades outside Wellesley.

“In the future, it might be better to either have a statement on shadow grading that comes with the official transcript, or, instead of shadow grading, have the option where students can freely choose to either disclose or not disclose their first semester grades based on the final grades they receive,” another student wrote.

Students who are transferring from Wellesley or are reporting GPAs for scholarships can have their shadow grades lifted for those institutions. Faculty members can report individual class grades in their letters of recommendation.

Some students said their drop in grades after first semester made them resent the policy since the higher grades did not factor into their GPAs.

“My grades were much higher first semester compared to second semester and it’s extremely discouraging knowing those grades won’t be a part of my GPA,” one student stated. 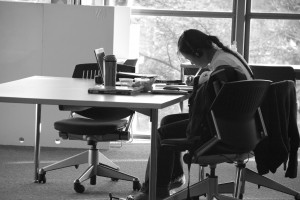 A CCAP Shadow Grading Implementation Group report last year to Academic Council concluded that shadow grading is supported by most first-years, has met many of its objectives and that the majority of student dissatisfaction related to the policy’s effects on their first-year GPAs.

CCAP members will continue monitoring the policy’s outcomes with the Class of 2018 and subsequent classes and collect more information about faculty members’ experiences.

Cuba confirmed that the policy has been very successful so far, remarking that students, alumnae and parents have given him positive feedback.

According to Cuba, the largest challenge is that some incoming first-years view it as a roadblock rather than an opportunity.

“Students need to decide to use shadow grading to address the ends that motivated its adoption: to challenge themselves, take academic risks, develop effective work habits, balance multiple commitments and reflect on the many transitions they are making as they start college,” Cuba said.

Cuba also remarked that the Wellesley faculty and administration have no definitive predictions on the policy’s future effects.

“The approach to evaluating the policy is to collect data on an ongoing basis for the next three years to see if students’ experience with the shadow grading continues to be positive and aligned with the goals it seeks to achieve,” Cuba explained.

Jacqueline Young ’18 remarked that shadow grading enabled her to participate in a variety of student organizations and find her niche at Wellesley.

“Shadow grading gave me the freedom to take challenging courses I typically wouldn’t have considered under other circumstances. I never expected to be a Computer Science major until I took CS110 on a whim my first semester!” Young said.

On the other hand, some students expressed that the policy gave peers the opportunity to ignore academic responsibilities. Sydney Stewart ’18 said the policy could have been more effective in encouraging students to explore their academic interests in their first semester.

“Many of my peers took advantage of the shadow grading policy by using it as justification for their decisions not to make their academics a priority,” Stewart said.

Danni Ondraskova ’18 is the News Editor. She is a Russian Area Studies and Economics double major. She is an avid Chicago Blackhawks fan who enjoys her hometown’s deep dish pizza and Indian food. She can be reached at dondrask@wellesley.edu.

Sam Lanevi ’18 is a Staff Writer at The Wellesley News who enjoys exploring bookstores, coffee shops, and restaurants in Boston. She is pursuing a major in History and possible Classics. She can be reached at slanevi@wellesley.edu.