Wellesley College enrollment data collected by Professor Akila Weerapana of the economics department reveals a 14 percent drop in humanities course enrollment in the last seven years, while enrollment in STEM disciplines grew by 29 percent in the same time period.

Faced with an overall decline in humanities course enrollment in the last few decades, Wellesley faculty and administrators have begun new initiatives this semester to actively promote student interest in the humanities and their relevance.

Enrollment in English and art history courses fell 23 and 28 percent respectively since the 2007-08 academic year, the year of the most recent economic crisis. Enrollments in economics decreased by four percent, while computer science enrollments increased by 109 percent.

The decline reflects a nationwide trend in which humanities enrollment figures have been consistently low since the 1980s. The percentage of all bachelor’s degrees students earned in the core humanities dropped to a low of 6.5 percent in 2013 from a peak of 17.2 percent in 1967, according to research by the American Academy of Arts & Sciences. The decline was steepest between 1970 and 1985. 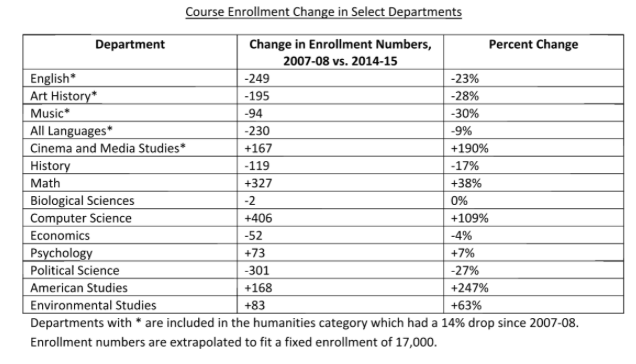 Russian professor Thomas Hodge, who also serves as Faculty Building Director of Founders and Green Halls, was tasked by Dean Kathryn Lynch of the Provost’s Office this July with coordinating efforts to boost the profile of the humanities at Wellesley. The initiative in its early stages involves behind-the-scenes brainstorming with humanities faculty and administrators in order to identify weak areas and suggest improvements. Hodge has sent out surveys, held meetings, reviewed data from the most recent senior survey administered by the Office of Institutional Research and plans to form working groups in the near future.

Hodge, along with the Office of Communications and Public Affairs, also launched efforts to increase the visibility of the humanities at Wellesley, including posters, video screens and last month’s Daily Shot article. Other changes include a new course browser that features two random course descriptions at the top of the page. Hodge hopes to soon create a humanities webpage on the Wellesley site that would highlight current students’ projects, interests and achievements as well as spotlight faculty and alumnae.

According to Hodge, many students misguidedly turn away from the humanities because of the belief that they are less likely to lead to lucrative careers and stable employment. Moreover, he believes students sometimes see the humanities as old-fashioned and hopes to convey the opposite message in the initiative.

“I think that the balance among the divisions at the moment does not reflect the deep-seated, sincere proclivities of some of our students. We should be clear about how the humanities position you to succeed in future careers that don’t necessarily have to do with the humanities,” he added.

Hanna Day-Tenerowicz ’16, as well as Dean of Faculty Affairs Kathryn Lynch, noted the many benefits that the humanities and a well-rounded liberal arts education bring to individuals and society.

“The humanities aren’t just there to balance out math and science,” Day-Tenerowicz, a women’s and gender studies major, said.

Dean Lynch has observed that the skills of writing well, communicating and analyzing problems she developed as an English and classics major were transferrable to her current administrative position.

“The humanities provide meaning to our lives. It’s also crucial to have scientific and technological advances, but to have those without the culture and wisdom to support them would make a society impoverished,” she said.

Some students said they find meaning in branching out into different disciplines.

“Say with biology, your brain works in a different way; you write differently. Taking courses in the humanities requires you to step out of that, for example when you analyze a literary piece as opposed to a scientific paper. It’s really rewarding because you learn how to think in a variety of different ways,” said biological sciences major Synthia Hernandez ’16. Hernandez has taken more courses in the humanities than the amount needed for distribution requirements, including courses in theater, Russian literature and creative writing.

However, Dean Lynch believes that Wellesley students as a whole are not adventurous enough when it comes to taking the initiative in exploring different disciplines.

“Students tend to gravitate toward courses that are most familiar to them,” she said. She noted that courses about earlier time periods are not as popular, for instance.

When asked how faculty could make the humanities more attractive to students, Lynch said that faculty members have to keep up with what students are interested in and “retool and develop new courses” to fit those needs. Blended learning, an initiative led by Spanish professor Evelina Gužauskytė and funded by a three-year Mellon grant, is a way for humanities departments to evolve, according to Lynch. The program supports projects that combine technological innovation with education, one of which brings the “flipped” classroom model to language courses so that students can listen to lectures at home and practice in the classroom.

Lynch also started the Dean’s Humanities Collaborative Initiative last spring, in which she picks a trio of courses in related topics from different departments each semester, gives them a small budget and encourages them to organize various activities together. These activities may include joint class meetings, visits to the library’s Special Collections or even a trip to the production of a play they studied.

Lynch said she is “frustrated” when she hires new faculty to teach new courses based on responses to student demand for new subject areas and there are not enough enrollees.

Most students who were questioned seemed uncertain about why enrollments in the humanities has fallen. Biological sciences major Anita Yau ’17 wondered if the accessibility of humanities courses makes enrollment spread out over the many possible courses one could take.

“There aren’t core prerequisites for many upper-level courses,” she said.

“There’s also no set order of classes to take. For example, biology majors tend to start with either Introduction to Organismal Biology or Introduction to Cellular Biology, so students in these majors can design their own track. This might spread out the students more than in non-humanities classes” and make enrollment in each course lower, Yau said.

“I don’t think that the amount of distribution requirements makes it difficult to explore the humanities since I did actually explore quite a bit,” said economics major Maria Castano ’16.

“I just think that there are a lot of options within the humanities that maybe non-majors don’t get to most of them.”