Boston Calling is a particular festival in that it catches a culture of Boston that most people forget. There are no revolutionary war heroes or sports fanatics at Boston Calling. Boston is, in large part, a college town. With over 50 colleges and 250,000 students, Boston is also home to a large population of young urban creatives, now referred to as “yuccies” by Slate Magazine. The young urban creative is not quite a hipster, but not quite professional. They will wear Warby Parker hipster glasses, drink cold brew coffee and stop watching cable but they will also go to their nine-to-five jobs, get married and gentrify whatever neighborhood they live in.

This year in particular, the festival’s lineup had a vibe of “your beginner indie playlist.” Bands like Hozier, Of Monsters and Men and Walk the Moon have a feeling of “Top 40 with indie cred.” The playlist was one for people who have cool music taste but don’t have the time to really dive into their taste. At the end of the day, the headliners of Boston Calling are just that: headliners.

With that said, of course, different bands draw slightly different crowds. Alt-J, the closing act on Saturday night, drew more musically engaged fans. With an inviting, energetic but nuanced set list and artistic, abstract light show, Alt-J’s performance was one of the musical and spectacular highlights of the weekend. 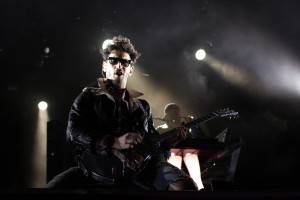 Dave Macklovitch from Chromeo plays at the Jet Blue stage

One of the factors sorely lacking amongst this year’s Boston Calling lineup as a whole, with few exceptions, was overall stage presence. Chromeo, who performed early Saturday evening, was notably bad at engaging the audience, playing straight through the set list with a few token shouts at the audience. The Avett Brothers, who closed out the performance on Friday night, also failed to speak to or engage the audience with jokes or stage presence. With that said, their string players, especially their female violinist and their cellist, whose cello did not touch the stage floor once during the performance, lent them an energy that made their lack of interaction more forgivable.

Of Monsters and Men, the folksier Walk the Moon of three years ago, for those of you who thought the band was a has-been, put on a perfectly adequate performance, with plenty of energy, and was a lot of fun to see. They may not gush artistic creativity, but watching them and Walk the Moon can make a person wonder — does every band need to, if the acts are really so pleasant? Chvrches’ frontwoman, Lauren Mayberry, took more liberties when attempting to connect with the audience, letting her charmingly Scottish awkwardness shine through. The result: those who were packed in the crowd around the red stage were charmed and entranced by the closer dialogue, but those who preferred to enjoy the festival from the outer reaches felt the energy fizzle during Chvrches’ set. Chrvrches had an added advantage, too, coming into their Saturday evening spot at Boston Calling, of having released their album “Every Open Eye” just the day before, on Sept. 25.

Sunday offered performances such as Hozier and Alabama Shakes, continuing the tradition of Top 40 friendly indie bands. Hozier’s set was more mellow, but the audience had a better sense of his repertoire. Alabama Shakes ended the concert with as much of a bang as they could, considering their catalog. They had the unique challenge of closing out the festival, despite the fact that everyone else seemed tired. Thoughts of work on Monday and getting through the week permeated the atmosphere on Sunday, but Alabama Shakes powered through and ended the festival on a high note. 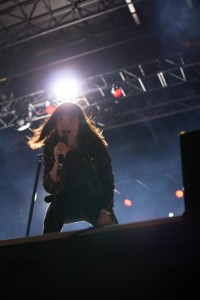 Lauren Mayberry of Chvrches performs on the red stage

Along with Boston Calling’s soundtrack comes the typical young urban creative fare, including food trucks and beer gardens. The food trucks serving were Roxy’s Grilled Cheese, the Chicken and Rice Guys and Tasty Burger. As if overpriced grilled cheeses and shawarma that is just called “chicken” wasn’t enough, there was a Whole Foods booth offering free samples. Sam Adams had a booth where they sold not just their signature beer, but the “craft” version of their beer, adding to the urban creative feeling.

Even the venue felt urban, cosmopolitan and creative. Amidst the performers, festival goers and decor, the Boston skyline loomed overhead. The effect of concert lights, and the weekend’s Supermoon and eclipse, on buildings added to the urban festival effect, but still felt like a slight respite from the office and Monday culture. Boston Calling isn’t Coachella or Governor’s Ball. It’s very much its own festival, afloat on its own tiny urban plaza. Boston Calling culture, therefore, can’t just ape any other festival. It’s the only music festival you can attend wearing Patagonia and Sperrys. It’s the only music festival that is uniquely Boston, and its steps towards embracing college student and yuccie culture are probably steps in a sustainable direction for the events’ future.

That being said, there is a reason Boston Calling picks these things. They are fun. They are crowd-pleasing, and they tap into Boston culture. For an up-and-coming music festival, those are the features you need to bring people out, especially with the high ticket prices. Although the ticket prices are customary for a festival, they may be intimidating to Boston Calling’s target audience. In order to get people, the festival needs bands that are easy to listen to and food that most people will like. A jazz performer with street cred and Korean fusion food truck aren’t the ways to bring in Boston’s fanbase. Beer garden, burgers and Walk the Moon are popular, making it worth going.