You may have noticed the plastic containers and paper bags in the Freeman and Shafer lobbies, overflowing with food, clothes, blankets and toiletries. This collections drive is part of the Students Organized for Syria (SOS) campaign to assist Syrians in their struggle for freedom and ultimately help them attain an independent, pluralistic society that will replace the current humanitarian crisis. Today, the country is in shambles due to an ongoing civil war between President Bashar al-Assad’s government and the rebel forces who want to overthrow him.

According to their official website, SOS is a nationwide organization that focuses on “promoting student solidarity with the Syrian people’s struggle for freedom by holding nationally unified campaigns in the following three categories: Education/Awareness, Advocacy/Solidarity, and Fundraising.” SOS has chapters across the United States, including groups at Wellesley College, University of Pennsylvania, Yale University and University of California Berkeley.

Tala Nashawati ’17 explained that she helped initiate a Wellesley College chapter of SOS last spring after she heard about Columbia University’s SOS chapter.

“I knew [forming this chapter] would be the best way that I could help even while I’m at school,” she said. “The process wasn’t difficult, and the national organization is always happy to have chapters join.”

The national SOS organization is affiliated with NuDay Syria, a non-profit organization that collects the donations, packs them into 40-foot long containers, and sends them off from a warehouse in Amesbury, MA to be shipped to Mersin Port in Turkey. From there, a local shipper transports the containers to Bab al-Hawa, an international highway between Syria and Turkey, where the donations are transferred to many different trucks that carry the items to refugee-heavy areas.

Nashawati expressed how the entire operation is demanding work and quite dangerous, especially for locals directly distributing donations.

“The people who distribute [these donations] are actually Syrians, essentially risking their lives to bring the items to those who need them,” she said. “It’s a truly amazing organization that is making a real difference.”

In addition to this collections drive, Wellesley’s chapter of SOS has launched several fundraisers in the past and has sent the proceeds to NuDay Syria. Fundraisers included two baklava sales and a hookah fundraiser that they organized with Wellesley Arab Women Association. 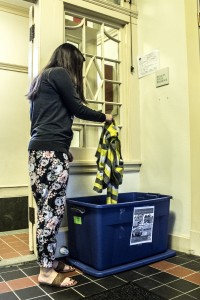 “Relief efforts for Syrian refugees and bringing awareness about their situation are very important because often, we get caught up on trying to understand the narrative of war and politics among big leaders and agitators that we forget the people that directly affected by the violence,” Khan said. “We forget the humanity, needs and rights of the civilians and refugees who have been harmed the most by the crises. Their lives have been altered for the worst, and our involvement is the least we can do.”

Maryam Mustafa ’18, who is working with Al-Muslimat to organize a box of donations and personal letters, agreed that it is important for students to remember how real this humanitarian crisis is.

“[Many refugees] are in danger because of the boat rides they have to take and many have [also] drowned– just like Aylan Kurdi, a 3-year old boy. It sucks that students need the photo of Aylan to realize just how ‘real’ these issues are. However, when learning about these issues, you are given the chance to transform these situations with the help that you can give,” she said.

In addition to fostering relief for Syria, part of SOS’s philosophy is to promote student activism, emphasizing that students have the power to alleviate the humanitarian crises that afflict nations in the developing world today.

Nashawati explained why she thinks student activism is absolutely essential in today’s society.

“I think it’s very important that, locked up in our Wellesley bubble, we are still aware of other things happening around the world. Syria is the largest humanitarian crisis we’ve seen practically since the Holocaust and definitely in our generation, and for us to just ignore that because we’re far away and don’t see it in our own backyard is, in my opinion, unacceptable,” she said. “We have to put everything into perspective and do what we can to help, especially in this case, where literally every donation makes a difference in someone’s life. If we have the power to help, then we have an obligation to help.”

Khan agreed that it is important for students to recognize the privileges they have, and more importantly, use that power in order to advocate for change in countries that need assistant.

“We should not let the civilians and refugees of the Syrian crisis feel like we have forgotten about them,” she said. “Our activism is a privileged one. We are here doing the little things we can do to help; they’re out there trying to survive. We have privilege and we need to help, not because it’s noble, [but because] it’s our duty.”