One and a half years after the WAAM-SLAM II movement protested the Wellesley College administration’s failure to provide for a multicultural space on campus, an emerging organization of students with ties to the movement, known unofficially by the hashtag #wakeupwellesley, hosted a student-led Solidarity Meeting to foster inclusivity and establish a “safe space” for students to discuss diversity related grievances. The meeting took place Friday, Oct. 16 at the Hoop and Tishman Commons in the Lulu Chow Wang Campus Center.

The Wellesley Academic Action Movement – Siblings Leading Action for Multiculturalism Part II (WAAMSLAM II) began in April 2014 as an effort to broaden academic, student and admissions-related diversity on campus. Organizers declared their intent in a petition to various administrative officers in Demands for Transformative Justice and Education at Wellesley College, which called for the establishment of a physical, multicultural space that included a Latin@ and AsianAmerican House, programs geared toward accommodating students with disabilities, socioeconomic equality, diversity training for faculty, support for dining hall and custodial workers, a reduction in fossil fuels as well as four other demands for changes in administrative policy.

While WAAM-SLAM II achieved several of its goals with the cooperation of administrative departments, including faculty hires in the Africana Studies department and Latin@ Studies courses in the American Studies Department, it did not acquire physical, multicultural space “where students of color can create a supportive and safe environment that reflects the resources our college claims to extend to our communities” to replace the Intercultural Education Lounge in Billings Hall Room 200, which requires reservation before usage and, according to WAAM-SLAM II, is insufficiently sized to accommodate all interested students. Organizers for the Solidarity Event promoted the Solidarity Meeting with flyers lamenting the absence of a multicultural space.

“Multicultural organizations were promised a gathering space during planning phases of Lulu Chow Wang Campus Center. Instead, they received lockers on the 3rd floor.” 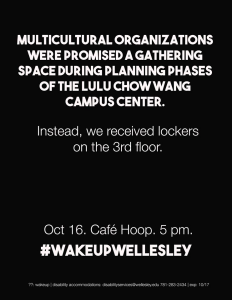 While several organizers of the Solidarity Meeting were affiliated with WAAMSLAM II and multicultural organizations on campus, including MEZCLA, they did not host the event as official representatives of their prospective interests. The Multicultural Cabinet of College Government did not have a role in organizing the event either. However, it is “proud to support our siblings who are working to improve our campus, and we welcome the opportunity to work together on these ventures in the future,” Multicultural Affairs Coordinator Ananya Ghemawat ’17 said.

Organizers ushered nearly 80 attendees into Café Hoop and the Tishman Commons, reviving WAAM-SLAM II’s calls for a multicultural space. Students were given a small handout titled, “Guidelines for this Space,” which culminated in an overarching goal: “This work is about souls just as it is about goals,” referencing the event’s emphasis on the individual’s emotional experience of marginalization by campus culture and standing policies.

There were 12 guidelines in total, one of which stated, “We commit to creating not just a safe space but a brave space.” Organizers sought to encourage open conversations in which students would “embrace discomfort,” diminishing societal expectations and encouraging understanding and compassion. In doing so, the meeting aimed to spur “change and growth within” attendees, breaking down social, cultural and economic barriers. Attendees, in reading these guidelines aloud, were told to refrain from using “I” statements and to avoid generalizations.

At the meeting, organizers expressed their intent to create a safe space for attendees and personally guided each discussion, recognizing that “no spaces are completely safe and free of oppression: we commit to call in, not out.”

One of these attendees, who chose to remain anonymous, asserted that organizers were successful in their goal to create a safe space.

“I felt very safe and was able to meet many like-minded people… So many of us were able to express [these] emotions for the first time,” the anonymous student said.

Attendees divided into small groups and introduced themselves by responding to the prompt, “What do you need to feel loved?” After breaking the ice, students were given the opportunity to share their personal experiences at Wellesley, attribute those experiences to specific institutional causes and brainstorm ideas to solve them.

“The organizers did an excellent job of asking questions that aren’t often valued in other spaces. I can’t remember the last time I saw true diversity like that at Wellesley, and as someone who hits many identity intersections, it’s incredibly valuable to hear and lift up the voices of others who in turn lift up mine and in that way we all make change,” Davis Scholar Layla Ariana said.

While the movement is in its pre-nascent stages and has yet to establish a fully developed philosophy or organization, the meeting encompassed a vast range of backgrounds and interests. Davis Scholars, LGBTQ+ students, students of color, students coping with financial hardship and other marginalized groups came to voice their opinions regarding campus policy, community dynamics and the difficulties they face.

“I went to build community as a Davis Scholar and share some of our concerns, a large one for myself being financial aid not covering costs for off-campus commuters,” Ariana said.

The organizers declined to interview with The Wellesley News but disseminated a series of nine #wakeupwellesley flyers promoting the event that articulated nine concerns regarding the Wellesley campus culture and policy. Reciting the college mission statement, one of such flyers called on Wellesley administrators to “make true to its claim and listen to the needs of its students.”