On Nov. 18, members of the Wellesley community, led by the Ethos Political Action Committee, marched in a demonstration called Taxi Cab 1969. The demonstration’s purpose was to oppose “administrative complacency towards Black issues at Mizzou, the popular nickname for the University of Missouri, and Wellesley College,” according to the Facebook event page.

The demonstration echoed the student activism at other schools across the country, especially the University of Missouri. This year, 11 students at the school formed a group called “Concerned Student 1950.” The group, as well as several other members of the Mizzou community, was protesting against the historically prevalent racism on the campus. Concerned Student 1950 presented a list of demands to the Mizzou administration. Among those demands was the call for the resignation of President Tom Wolfe, who the group said had not stood in solidarity with the students, but rather had allowed racism on campus to continue.

The same week that the Taxi Cab 1969 demonstration was held, President Wolfe resigned from his position. Following his resignation, student activists at Mizzou became targets of threats and racism. In one particular instance, a 19-yearold student named Hunter M. Park posted on the popular anonymous social media app Yik Yak threatening the lives of Black students at Mizzou.

Like Concerned Student 1950, which drew its name from the year the first Black student was accepted to the University of Missouri, Taxi Cab 1969 has a significant history to its name.

Sydney Stewart ’18, the Ethos Political Action Committee (PAC) Co-Chair along with Co-Chair Serenity Hughes ‘18, explained that Ethos and Harambee House decided upon the name to honor the legacy of the Ethos founder at Wellesley College. In 1966, Ethos was founded by Nancy Gist, Janet Hill, Alvia Wardlaw, Francile Wilson and Karen Williamson, all members of the Class of 1969. After they attended a conference at Columbia University that focused on “The Black Student on the White Campus,” they decided to create Ethos “to represent the Negro students on campus in matters which concern and interest us.” The founders were in a taxi on the way back from Columbia when the came up with idea, hence the reference to “taxi cab.”

“We hoped to honor them and their work and continue their legacy through our demonstration by renewing our commitment to the matters on campus which concern and interest us, the students of African descent at Wellesley College,” Stewart said. The event began in the Lulu Chow Wang Campus Center, where students dressed in black to show solidarity. Before the march began, Stewart asked everyone to participate in a moment of silence for victims of violence around the world. A few days earlier, terrorist attacks had occurred in Paris, Baghdad and Beirut. After the moment of silence, Stewart explained the reason Ethos had called the community together.

“The purpose of the event was to show our solidarity with students at the University of Missouri, Yale, Ithaca, Amherst and countless other schools around the nation that have chosen to speak out against and actively resist administrative adversity and complacency on their college campuses,” Stewart said.

Students then marched to the Academic Conference Room in Green Hall, chanting “Black Lives Matter” and “It might be Missouri, but it’s our story” as they walked. The Academic Conference Room was filled to the brim with students as Provost and Dean of the College Andrew Shennan, Dean of Admission and Financial Aid Joy St. John and Interim Dean of Students Adele Wolfson entered the room to listen to the activists’ voices. Wellesley College President H. Kim Bottomly was in London at the time.

According to Stewart, Ethos PAC has not yet been given the opportunity to present the demands to the Wellesley College administration.

“We wanted to first allow them the opportunity to hear the concerns of students of color as they pertain to their relations with the administration,” Stewart said.

Stewart invited Huiying Bernice Chan ’16 and Rita Gabriela Márquez ’16 to begin with statements before she opened the floor for other students of color to speak. Chan and Márquez detailed issues they faced organizing at Wellesley and the activism of students of color led in the Wellesley Academic Action Movement-Siblings Leading Action for Multiculturalism II (WAAM-SLAM II).

“I have been told too many times that when I take classes on race, I am studying myself and that is not legitimate,” Chan said.

Chan was referencing comments the administration made to her. When students advocated for greater ethnic studies courses and faculty, they were told that ethnic studies is not rigorous enough as a discipline, Chan said.

She discussed why the students were there: the complacency of the administration in addressing the inequalities in Wellesley courses, curriculum and faculty and administration interactions. 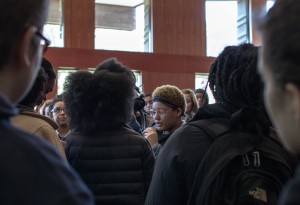 Students gather for a workshop in Tishman Commons. Photo by Havannah Tran ’19.

“We know exactly how the system works. That is why we are here,” Chan finished. Márquez continued the activism of WAAM-SLAM 2 when students of color brought up their concerns and demands for the administration in April 2014. While students marched through Green Hall, passing each administrative office with the list of demands, they were met with resistance from administration. Márquez said one dean even shoved the bill of demands back into a student’s face and accused them of terrorizing her. A week later, the locks in the administrative offices of Green Hall were changed, Márquez said. Márquez continued, saying students of color were criminalized for the activism.

“What about black and brown students scares faculty so much?” Márquez asked.

When the floor was opened, several students of color talked about their experiences at Wellesley.

“The administration has failed to recognize that there are at least four students on this campus that hold Lebanese citizenship,” said Basma Jaber ’18.

Earlier that week, the Office of International Study sent out an email that said all students abroad had been accounted for in light of recent terrorist attacks in Paris and Beirut, and support was being provided for international students from the respective countries. The email said they were not aware of any students from Lebanon that were currently enrolled at the College.

“Not only is it an issue that we didn’t receive support for us and the struggle that we have been through, but for you to blatantly to ignore our existence on this campus is just disrespectful,” Jaber said. Other students spoke about the need for multicultural spaces on campus.

“One of the things that really gets to me is how can Wellesley talk about the Wellesley Effect that contains a sense of space without considering any form of multicultural space for me or anyone that looks like me,” said Ananya Ghemawat ’17, the Multicultural Affairs Coordinator.

Several students of color had spoken about their experiences and highlighted why the Ethos PAC’s list of demands were so important for the administration to respond to in a timely manner. Shennan and St. John responded to students’ statements. Shennan repeated that the administration is thinking about how to address the issues raised, to which several students responded “not good enough.” In one instance, Shennan gave a more definite time: when pressed for a time frame for the implementation of required multicultural training for faculty and staff, Shennan told students next semester. Ethos PAC has not released their demands yet to Bottomly, Shennan, Wolfson and Dean St. John.