The Madeleine K. Albright Institute for Global Affairs hosted its first Albright Institute Symposium from Jan. 30-31. Over 200 Albright Fellows from the seven-year program attended the event. The symposium was called “Impact Albright” to highlight the legacy of former Secretary of State Madeleine Korbel Albright ’59. The symposium featured the inaugural MaddyTalks, a Saturday panel discussion on recent Albright Fellows’ work hosted by the fellows, Albright and former Wellesley College President Diana Chapman Walsh ’66. Three panel discussions were hosted on Sunday and were free to the public. A morning session on “Health for All: Public Health and Health Care in Rwanda” was followed by “Can We End Hunger by 2030? Will We?” The keynote afternoon session was “Public Dialogue: Addressing Global Inequality.”

The Wellesley News was honored to interview Albright on Friday at the Wellesley College Club. Topics discussed included the manifestations of global economic inequality and the role of technology in helping the poor realize what the rich have in developing countries.

Albright called Oxfam’s recent finding that the world’s 62 richest people own as much wealth as the 3.5 billion poorest people “stunning” before noting that lack of access to education, discrimination against women, hunger and lack of  access to technology cause economic inequality. 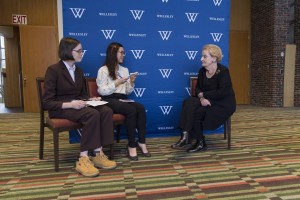 “It’s very hard to point to one thing, but they operate on each other. It’s kind of the intersection of everything, and it creates even more issues,” Albright explained, noting that the multifaceted causes and implications of economic inequality make governing more difficult.

When asked about the importance of interdisciplinary problem solving and collaboration between different fields, Albright discussed the need “to think of things as intertwined.”

“One of the reasons we have the Albright Institute and the Albright Fellows is that we operate on an interdisciplinary plane,” Albright said.

Many countries today struggle to balance investing in their domestic and foreign activities. Countries that would otherwise invest more resources in combatting global inequality are constrained by the sentiments of their lawmakers and citizens. Albright discussed the need to address U.S. economic inequality before underscoring a common mistake people make.

“People make it sound like a zero-sum game. You do what you have to at home, and don’t worry about abroad. The only way this [reducing global inequality] will work is if people understand the foreign policy implications when they come back [home],” Albright explained.

Albright said the fear that permeates politics today is no basis for policy.

“I would prefer to think about it in terms of what is right and what isn’t…Half the world is starving and the other half is buying diet pills. It’s dangerous and it’s wrong,” Albright stated.

Albright said Wellesley students and alumnae can reduce global inequality by working in public service and nongovernmental organizations. She highlighted the value of a Wellesley education in understanding the interconnectedness of global issues.

She was prepared to enjoy Wellesley but had not foreseen its indelible influence on her.

“I never thought that it would…have the effect it has had on me all my life in what I learned, my study habits, the way I see things and my friends. My best friends are still the ones I met here. Wellesley was one of the major parts in molding me, and there’s no question about it. I had thought, well, it would be nice to go to this beautiful college. But I never focused on the fact that it would be so essential to my very being,” Albright elaborated.

Albright also remarked about the timeless “need for dedicated, smart women to go in there and push and set an agenda and not be discouraged.”

“I think if there’s one thing about my story, it didn’t matter what I was asked to do. I always did it…I was responsible, and I think one should never demean a job because you should like it, be interested in it and make the best of it. You never know where it leads, and so I think it’s really worth doing your best,” Albright concluded. 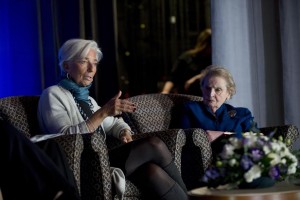 On Saturday, current and former Albright Fellows gathered for the inaugural “MaddyTalks: Global Ideas with Impact.” With Walsh starting off the MaddyTalks, presenters from different cohorts of Albright Fellows shared their experiences, which ranged from community-based solutions to environmental issues in northwestern rural China to the use of visual journaling to understand the marginalization of indigenous peoples across the globe.

The Sunday morning panel of “Health for All: Public Health and Health Care in Rwanda” also raised similar questions. The panel consisted of Ophelia Dahl ’94, co-founder and chair of the board, Partners In Health, Charlene Galarneau, assistant professor of Women’s and Gender Studies, Wellesley College, Vanessa Kerry, physician and co-founder and CEO, Seed Global Health, Neo Tapela ’02, associate physician, Division of Global Health Equity, Brigham and Women’s Hospital. The discussion of Rwanda’s health care systems led to notable insights on the role of governments and non-governmental organizations for the provision and management of health care especially in developing countries, with the strength of governmental institutions being important for ensuring successful partnerships.

“Can We End Hunger by 2030? Will We?” was comprised of Maxwell School of Citizenship and Public Affairs Public Administration and International Affairs Professor Catherine Bertini; former Wellesley College political science professor Robert Paarlberg; International Food Policy Research Institute Chief of Staff Rajul Pandya-Lorch ’85 and Cornell University professor Per Pinstrup-Andersen. The panel focused on food policy in the United States and abroad. This included changing thought paradigms on solving world hunger, such as increasing the quantity of food, increasing food quality or giving aid in cash instead of food.

This was succinctly captured by Albright in her closing remarks, “Do you give a hungry person a fish, [a] fishing rod or do you change the fishing industry?”

Moderator and CNNMoney Senior Economy Writer and Editor Heather Long ’04 asked each panelist to give a 30-second elevator pitch for our need and ability to tackle global inequality. Then,  Long asked the audience two questions that expressed the dichotomy between whether the world can and will solve global inequality.

The need to increase women’s status to solve global inequality dominated the discussion. Indrawati emphasized the need for equality of opportunity especially for women, noting the presence of laws discriminating against women in many low-income countries. Lagarde noted that inequality is sexist and that it would take 80 years to close the gender pay gap. She also alluded to the Oxfam statistic, saying “I would like to clarify one thing about this 62 people… 53 of them are male.”

“We need to get away, powerful though it is, from the opening line of the Oxfam point,” Malloch-Brown said, noting it can mask economic changes like the dollar’s appreciation.

“There’s some silliness in it which we just need to be careful about, and to focus on these real issues… and not think it’s some sort of epic struggle between the top sixty and the bottom three and a half billion, because if we think in those terms, we’re never going to solve the problems,” Malloch-Brown stressed.

The panelists also drew attention to the need to look at solutions to global   inequality in detail. While strong and appropriate macroeconomic policies will help a country fight inequality, the overall effectiveness of policies can come down to seemingly insignificant details, like the building of more childcare centers in Japan to increase female labor force participation.

Another theme was the link between inequality and social conflict. The Syrian refugee crisis was brought to the table, with panelists commenting on how it reflected the greater instability and unpredictability of today’s world and the need for strong institutions to respond. 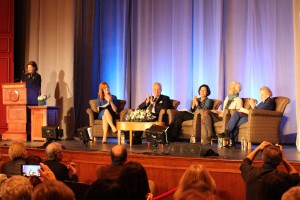 When opening the keynote session, Wellesley College President H. Kim Bottomly emphasized the need for robust discussion at Wellesley. In this spirit, Wellesley students and alumnae did not avoid posing hard questions to the panelists, many of which stemmed from personal experiences studying and living across the globe. These included questions on whether the resolution of global inequality requires democracy and whether there are potential biases in solutions to global inequality prescribed by organizations like the World Bank that have led to an erosion of trust between those organizations and the people of the countries they resolve to help.

Since many speakers from this year’s Symposium work in large global organizations or academia and hail from Western backgrounds, some questioned whether the Albright Institute sufficiently presents the world’s diversity of experiences. Some hope to see a greater diversity of speakers and viewpoints in future Symposia to lend a new dimension to the discussions.

“At times I am frustrated by discussions of issues such as poverty and hunger that seem to leave out the voices of those who are directly impacted,” said 2015 Albright Fellow Chloe Williamson ’16.

“I think that the inclusion of speakers who have dealt with poverty, hunger, or other global issues directly could really benefit the Institute. However, I know that the Institute is making an effort to increase the diversity of their speakers in the coming years, and I look forward to seeing how this change will play out,” Williamson elaborated.

Also of note was the increased access to the Albright dialogues this year. Besides the harnessing of social media and technology to provide live events and enable many to participate by asking questions online, the 2016 Symposium was held on the weekend of the first week of the Spring semester. In previous years, public Albright dialogues occurred before most students returned from Wintersession. This change allowed many students to attend the dialogue.

Current Albright Fellow Saraphin Dhanani ’16 reflected on the need to “transform spaces to hold more people and have more public lectures so that Wellesley College students can take advantage of these discussions.”

“Equity is key here, and giving the greater Wellesley College an opportunity to attend these events—whether they are or are not Albright fellows—will strengthen the Albright Institute by encouraging an even more diverse group of students to apply,” Dhanani reflected.

Encouragement was indeed present at the Albright Institute Symposium, be it from students, speakers, or Albright herself. Williamson was inspired by a quip from Albright at the Saturday lunch for Albright Fellows.

More photos of the 2016 Albright Symposium can be found here