Winter storm Jonas hit parts of the East Coast severely just as Wellesley students were trying to return to the College in time for the spring semester. Between Jan. 22 and Jan. 24, Washington D.C. and New York City were faced with more than two feet of snow. Initial forecasts of extreme conditions in Boston were changed, and the city was not struck as hard as others along the East Coast. However, many students were forced to alter their travel plans.

“Due to the potential for a significant winter storm over the weekend, the residence halls will be open for move-in at noon on Friday, January 22nd,” said an email sent out by Student Housing Services to the Wellesley student body on Jan. 19. This change was intended to allow students who switched their plans to arrive before the storm hit to have swipe access to residence halls a day earlier, although dining halls did not open until the next day.

Currently, there is no campus-wide policy for weather-related absences due to travel setbacks Students were left to guess how to handle missing a class when it is beyond their control, especially for classes with waitlists, where  a student must typically attend to keep their spot.

“It was slightly inconvenient because I missed two Monday classes,” Chanel Silva-Gomez ’19 said. Her flight from Texas had been cancelled.

“I emailed my professors over the weekend to let them know and thankfully they were forgiving…but still, it was a little worrying,” she continued. She mentioned her hope for some kind of standardized policy that students could refer to in the future, which would clarify what someone like her should do in this situation.

“I did fear getting behind because at Wellesley “syllabus week” isn’t really a thing…and a lot of work gets assigned immediately, so I was anxious to get back to campus and catch up,” Silva-Gomez explained.

This presents a bigger problem for some classes and departments than others, particularly classes which have lab requirements that must be completed.

“With my astronomy class I was kind of worried, though, and I asked the professors to hold my spot in the class since it was full,” Silva-Gomez said. She ended up having a more positive experience because the professor was able to hold her spot.

“Chemistry requires all students to complete all labs, but during the first week students are often uncertain about registration or are trying to switch lab days,” Julia Miwa, Associate Professor and Chair of the chemistry department, said. She noted that students often switch lab sections or have to make alternate plans in the beginning of the semester before they have finalized their schedules even without weather delays.

“Anyone who came back to campus late because of the weather and missed a lab on Monday or Tuesday had the opportunity to make it up later in the week,” Miwa continued. Miwa noted that although the chemistry department does not have an official policy regarding weather-related absences, she is not aware of a student being penalized under these circumstances. 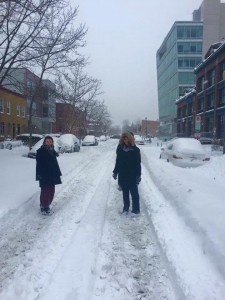 Seminars, typically two and a half hour long sessions, can also be difficult to make up.

“We had to make special arrangements to get the students who were in Washington for the Wintersession portion of POL 230 back to campus before the storm,” Joseph said. This class, also known as The Washington D.C. Experience: Leadership & Public Policy, met throughout the fall semester and then traveled to Washington D.C. together over Wintersession.

Last winter, Wellesley College faced backlash after snowstorm Juno when dining hall employees were faced with the choice of reporting to work in blizzard conditions or receiving no pay unless they took a personal day. Workers who did report to the College were unable to return home because of dangerous road conditions and slept in The Wellesley College Club and Lulu Chow Wang Campus center. The College’s handling of weather-related incidents was critiqued in comparison to nearby Babson and Brandeis, which left the choice of traveling to work to the discretion of individual employees.