When I found out that “Matt and Ben” was being modeled after Matt Damon and Ben Affleck, I was immediately filled with glee. I’d heard of their cute bromance and was excited to watch it unfold in a theatrical performance. The fact that it was written by Mindy Kaling was a plus. I grabbed tickets for the 7 p.m. showing for myself and a few friends and had great expectations for the show.

I wasn’t disappointed. In fact, the show exceeded my expectations. The rapport between Rowan Winterwood ‘16 and Maya Martin-Udry ‘16, acting as Matt and Ben, respectively, was fluid and effortless. The chemistry between them was palpable as they played off of each other’s energyAlthough they were the only two cast members, they had enough vitality to carry the whole show. The dialogue between them was whip-smart, and the wit acerbic. I felt like I was actually peeking into the life of two buddies who were thick as thieves. 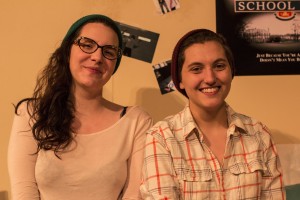 I was really surprised by the portrayal of young Ben Affleck. I had never pegged him as a carefree machismo. He seemed so serious, and I didn’t know how much of his easygoing nature was exaggerated for comedic effect. The loud-mouthed, reckless and brazen Ben I was watching seemed like a far cry from the smooth and suave Ben Affleck I knew and loved. If that really was his personality back then, it was interesting to see how much he had matured as a person, friend and actor/ screenwriter.

The dichotomy between Ben’s laidback demeanor and Matt’s meticulousness was poignant and crisp. It was a riot to watch. I was constantly cracked up by how their personality types really played off of each other. It was intriguing to watch Matt Damon as the perfectionist and fastidious workaholic while Ben Affleck was the charismatic, affable joker. I could very much relate toMatt’s character, who liked to do things by the book, and was often anxious to “get things right.” However, seeing him through Ben’s character’s eyes, I realized how irritating that can be and saw how necessary it is to relax sometimes and not be so uptight. On the other hand, while I could appreciate Ben’s nonchalance, I felt bad for poor Matt, who was constantly ruffled by his friend’s carefree ways.

I was really impressed by the work the crew put into the show. The transitions between scenes were quick, keeping up the show’s momentum. The lighting would simply go off for a short while, and then come on again, signifying a change of scene. The special effects were impressive and attention-grabbing. The smoke effect was particularly effective, as it symbolized a transition into what I interpreted as a “dream sequence.” The comedic timing was impeccable, from both characters pelting each other with food to their rapid-fire verbal exchanges.

The wit in both characters’ dialogue was hilarious and incisive. One memorable line was: “Adaptation is the sincerest form of flattery,” spoken by Maya Martin-Udry as Ben Affleck. It was a wonderful play on the age-old adage, “Imitation is the sincerest form of flattery.” That was one of the opening lines of the play, and it perfectly set up his character’s reasoning throughout the play. It was so fun to watch his moral ambiguity.

The show gave a fantastic view of screenwriting and true bromance while creatively explaining how “Good Will Hunting,” Matt Damon and Ben Affleck’s claim to fame, came to be. Creative liberties aside, the ending was heartwarming, as the best friends started writing their soon-to-be-famous screenplay from scratch. I was inspired by the lesson of friendship I took away from Matt and Ben.