Last Friday, students and guests were welcomed into the Davis Museum for a special preview night ahead of this Wednesday’s grand opening. Attendees were invited to walk through the three floors currently open to the public and appreciate the recent makeover. For the past three years, the Davis Museum, now known as the Davis: Rediscovered, has undergone a drastic change in construction, layout and focus. The approximately half-million dollar undertaking saw walls torn down and built, artworks — both old and new — displayed for the first time, and a technologically savvy approach for visitor immersion and outreach. The new space was designed to incorporate a much more natural flow throughout the museum while also allowing curators to utilize the space to its maximum potential; the number of artworks on display has increased over twofold — from 300 to 650 objects. 650 objects, though seemingly a huge display, is nothing compared to the 13,000 objects the Davis Museum has in storage. The Herculean task of surveying each object and creating the most appealing exhibits was done by the Davis’s team of curators and outside professionals during the reinstallation process. 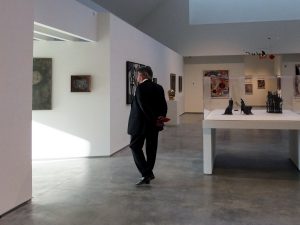 Past visitors of the museum will find that the orientation of the floors has changed dramatically. Now, each floor is organized by time period with the lower-level featuring Antiquity-age artworks from both Western and non-Western traditions, the fourth floor with its collection of medieval, Baroque, and Impressionist artwork, and the fifth floor comprising of modern and contemporary artwork. If that is at all confusing, the museum helpfully provides a gallery map, a new feature implemented as a part of the reinstallation. A large focus of the Davis: Rediscovered is fully immersing visitors into the museum. Along with the Gallery Map, patrons can download Cuseum (Davis Museum) to participate in gallery tours and view specific information about certain artworks. Currently, the app is only available on Apple devices, with an Android version in the works, but the Davis has 15 iPads available for guests to borrow during their visit for full access to the Cuseum app. The Davis is offering free audio tours designed to more fully inform patrons about artworks in the museum, and Student Visitor Assistants (SVAs) are located on each floor to answer any questions visitors may have and to make patrons’ visits as pleasant as possible. All of these new elements — the map, Cuseum, audio tours — are associated with big-name institutions like Boston’s Museum of Fine Arts (MFA), thereby creating a more informed and pleasant educational experience at the Davis: Rediscovered. 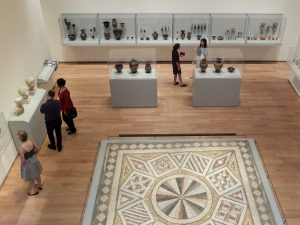 Some things have stayed the same amidst all of the change, like the rotating special exhibitions. This season primarily consists of contemporary artwork, kicking off on Sept. 28 with “Partners in Design,” an exhibit of Alfred H. Barr, Jr. and Philip Johnson’s artwork. Simultaneously, “Anni Albers Connections,” which celebrates Albers’ silkscreen designs and textiles, and “Charlotte Brooks at Look,” which comprises of the “LOOK” magazine photographer’s contributions throughout her career, will run. All three exhibits will be on display until Dec. 18. 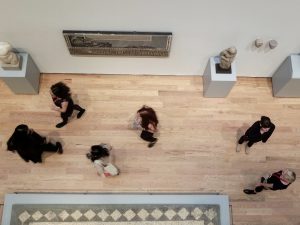 A major theme of the new reinstallation — and of the rest of the school — is the “Wellesley Effect.” One of the most prominent additions to the museum is the “Wellesley Collects” wall. Lisa Fischman, the director of the Davis, wanted the new exhibits to revolve around the idea of where each object came from and the story behind it. According to Lisa Fischman, “these stories are special because it connects the present all the way to the beginning of the college.”  A majority of the artwork came from donations by alumnae, and Fischman showcases that by celebrating the notion of giving back to the community and passing on the knowledge and beauty that is in art. The intersection of this new message and the incorporated technology provides an interesting new perspective that showcases the Davis Museum’s successful endeavor to match the rest of the work being done on campus. The reconstruction has revitalized the Davis and given it a message that exemplifies what it means to be Wellesley, ensuring the Davis: Rediscovered’s place as a must-see of Wellesley College.