The Wellesley Volleyball team finished up last week with an impressive win over the University of Massachusetts Boston on Friday Sept. 30. The Blue, now 11- 6 on the year, started off slowly losing the first set. However, the Blue rallied back for a strong second set performance. The team was led by sophomore Yasmine Reece (New Rochelle, NY) who finished with 15 kills, seven blocks and one ace. Reece, along with teammates Ashley Peng (San Diego, Calif.) and Kennedy Ulfig (Saline, Mich.) hammered 38 kills, and Michelle Li (Scarsdale, N.Y.) led the offense while first year Meghan Shoop (Cypress, CA) anchored the defense with 14 digs.  The game was back in forth with Wellesley winning the second, fourth and fifth matches to give them the overall victory. This was a huge out-of-conference match for the Blue, UMASS Boston came into the game ranked the number one team in the region. The Blue return to action Tuesday Oct. 4 to take on the Massachusetts Institute of Technology Engineers an in-conference rival. 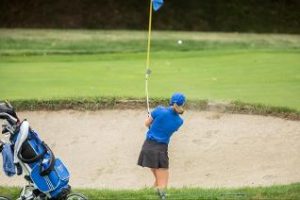 This past weekend the Wellesley Golf team was led by first year Ryan MacVicar (Tuscaloosa, AK) to finish ninth in the Williams Fall Classic. MacVicar opened up on Saturday with a score of 82 but was able to drop five strokes on Sunday to shoot 77 finishing 13th overall in the tournament. MacVicar was awarded the Liberty League Rookie Golfer of the Week for the second consecutive week. MacVicar was followed by first year classmate Kalau Tanaka-Pesamino (Ewa Beach, Hawai’i) who was the second lowest finisher for the Blue. The golf team will close their fall season on Saturday, Oct. 15 at Johnson & Wales.