One widely recognized difference between male and females are their likelihood to injure their knees. Over the last few decades, researchers have studied the effects of increased physical activity and strength training on the bodies of female athletes, and studies consistently show that female athletes have a much higher risk for knee injuries than male athletes.

Kelly Hoover, a sophomore on the soccer team, suffered her fourth knee injury in the spring season of 2016 when she was changing direction in practice. Hoover notes how attentive the Athletic Training staff was surrounding her injury, “they’re fantastic. They supported me and recommended doctors, MRIs and physical therapist.”

Hoover also noted that being at a women’s college made her feel more comfortable with her treatment. “I felt as if I got more attention because there are less athletes here and I never felt self-conscious during treatment.”

The University of Colorado Hospital reports that women are four to six times more likely than men to experience an injury while playing a sport that involves quick cutting, jumping,and change of direction. Therefore, training and treatment for female athletes must take into account these statistics and help prevent knee injuries in women as much as possible. Wellesley College represents a demographic of athletes that are all women allowing, a sole focus on preparing female athletes for competition. 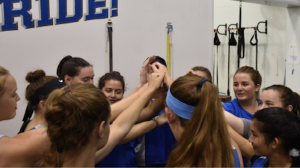 In order to prevent ACL injuries one must understand why females are more prone to injuries than males. Snyder notes that females are more likely to have wider hips which leads to a larger Q angle, the angle between the quadriceps and patella tendon, causing the knee to have to overcompensate often leading to knee injuries. Additionally, as a result of the Q angle the quadriceps in female athletes tend to be a great deal stronger than hamstrings which also can lead to knee injuries.

Snyder notes that as a strength & conditioning coach he focuses on three main exercises: hip strengthening, proprioception and landing mechanics. The varsity athletes at Wellesley incorporate these three types of exercise into every weightlifting session. The importance of preventing these injuries is not just for physical reasons, as sophomore on the lacrosse team Dacia Pesky notes, knee injuries can be mentally and emotionally draining as well.

“They want you to talk to people here, they want you to speak with the on-campus sports psychologist” Pesky said. The mental piece is an important part to recovering an injured athlete and preventing future knee injuries. The Wellesley Strength & Conditioning Team along with the Wellesley Athletic Trainers’ goal is to create a space where athletes focus on preparing their bodies for competition in a holistic manner, whether it be mental or physical the emphasis is on strength and preparation.