Q: At the rally, you mentioned that this election was the most important of your lifetime; how has your experience in this campaign been different than when your father was running for office?

A: When my dad ran for office, I was 12, and now, I’m 36. But I would say that the biggest difference is not only that I’m an adult now, but a parent of two children. I feel a different level of personal investment. So even more than being a daughter, I’m thinking from the perspective of being a mother. I’m just much more of a part of the campaign and advocate on behalf of my mom.

Q: What are some things that you feel the media has misrepresented about your or your family?

A: As President Obama spoke about at the Democratic Convention, there’s this caricature of my mom. I’ve seen this my whole life and have never understood it — I also don’t remember a time without it. So I wish that people would look at her life’s work as revealing of who she is, and that they would listen to the people who know her best, like her lifelong friends. 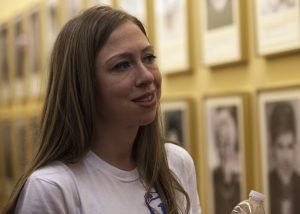 Q: So how would you describe your mother?

A: Mainly right now, she’s my children’s grandmother. I have really fallen down the totem pole of importance *laughs*. I wish people can see that side of her, and understand how proud I am and grateful for her life’s work.

Q: You’re the daughter of two incredibly accomplished people — has it ever been challenging blazing a trail of your own?

A: I don’t really think in those terms; because if I did, I would get claustrophobic. So instead, I try to think about what do I think I’m uniquely qualified for and am in a position to do. How can I best redirect the attention that I’m given to my challenges that are too often hidden in the shadows, and talk about issues that aren’t given enough attention? So on one hand, I like to speak on obvious topics such as my mom during this time, but also some of the more personal issues that I like to speak to in an organic way, such as breastfeeding, which I feel strongly about.

Q: What advice would you give Sasha and Malia as they leave the White House?

A: I don’t think they need my advice; they have two amazing parents who have clearly done a tremendous job in raising them. But I am very much in their corner and always will be if I can ever be a help to them.