Since renovations for the Science Center began this semester, parking has become a source of stress for students, faculty and staff. Preparation for the renovations, which will officially be undertaken from Spring 2018 to Spring 2019, have impacted Gray Lot, Christmas Tree Alley spaces, Science Center Road spaces and lower Simpson East Lot. Preparation for these renovations has closed the parking lots and has led to a massive relocation of registered vehicles to other locations such as Founders Lot and the Distribution Center (DC) Lots as well as an increase in the number of parking violation tickets issued by Campus Police.

Currently, construction is taking place in Gray Lot, the East Side parking lot located near the Science Center and the New Dorms, as modular labs are being built and prepared so that renovation of the Science Center’s L-wing can begin. According to Lisa Barbin, chief of Wellesley College Campus Police, the closure of the space and its surrounding areas has resulted in the reassignment of 170 registered vehicles. Chief Barbin explains that faculty and staff have been relocated to Founders, Schneider Tennis Court and the Davis Parking Garage, while students have been reassigned to park in the three DC Lots.

A number of issues have arisen due to the reassignment of parking locations. The influx of students who have been assigned to the DC Lots have significantly reduced the number of spots available for students who were originally assigned to park there. Rachael Tao ’19 explains that, “There have been a couple of nights now where I’ve come back from work at 10 p.m. to no more parking spaces in DC Lot, forcing me to park elsewhere.” However, Campus Police has issued a number of parking citations for violations that have, until recently, gone un-ticketed. Tao continues to say that “Parking where I’m not supposed to park is super stressful, knowing that Campus Police liberally gives out parking tickets.” 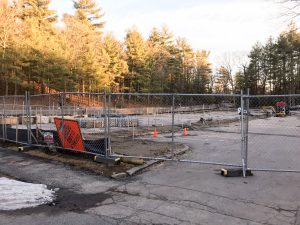 Furthermore, the DC Lots are located adjacent to the sports fields, putting them a substantial distance away from any of the residence halls and nearly a mile from the East Side residence halls. The Campus Escort Shuttle is supposed to alleviate this problem and bring students to their residence halls safely and in an efficient manner. The Wellesley website states that, “the campus escort program is a safe, reliable way to travel throughout the campus during hours of darkness.” The student-driven vans are scheduled to run every half hour, picking students up at predetermined locations throughout campus, including the three DC Lots. The site also notes that students waiting for a shuttle at DC Lot should “stay inside [their] vehicle with the doors locked and the lights on. Van drivers will wait at this location in order for those in cars to board.”

However, students have experienced escort vans not stopping in the lots and a lack of communication between Campus Police and students. Tao said that she has waited for over 15 minutes for a van and, upon calling Campus Police, has received little help or explanation for the van’s delay. Although the shuttle is supposed to run every night, student drivers sometimes cancel their shifts so that no vans can run during that duration. Sydney Ortiz ’19, who lives on East Side, finds the situation unfair for East Side residents. She recounts that “at 10-11 when I get back on campus [from work], I can only pray the shuttle will actually pick me up—whether it’s not running, driving right past me or I call and they always say it’s ‘en route’ but doesn’t show up after an hour.” As Campus Police does not have a means to notify students of cancellations or delays, students wait in the cold only to eventually walk 10 to 20 minutes back to their rooms.

Campus Police seemed unaware of these issues, although Chief Barbin says that several problems have arisen because of the parking situation. She says that there is now “the need for better lighting, [ … ] [as well as] challenges for snow removal.” In response to the apparent lack of escort vans near the DC Lots, she says, “The Police Department administration, along with their Student Supervisors, work hard to ensure student escort driver shifts are filled daily. We have not heard complaints about the shuttle skipping the DC Lot stops.”

Even so, students are finding the situation unfair and compromising. Ortiz says, “Obviously, parking is bad right now on East Side because of the Science Center reconstruction. But I feel like making everyone go to KSC is not equal. Sure, Tower and Quad residents can complain about it all day, but East Side students are the one taking a road trip to get to their cars.”