On Feb. 13 at 7 p.m., Dr. Alice Dreger spoke in the Clapp Library Lecture Room as part of the Freedom Project’s speaker series. The lecture, which was attended by about 50 Freedom Project fellows, students and faculty, also drew a crowd of about 50 students outside the library in peaceful protest.

Dreger is a bioethicist and former Northwestern University professor who has done extensive research on transgender and intersex people. Her talk at Wellesley was titled “When Scientific Pursuits and Social Justice Campaigns Clash, Who Wins and Who Loses?” She said she would speak about her experience both as a social justice advocate and as a scientist. On her website, she calls herself an ally to trans people and details her studies of how trans people experience the world.

Many transgender students at Wellesley, however, pointed out that not only do Dreger’s findings perpetuate stereotypes about trans women, but some, including the autogynephilia theory, also have been disproved by other studies. The autogynephilia theory “proposes that these trans women are just sexually deviant men who decide to identify as women because they get sexual pleasure from seeing themselves as women.” Transgender students who chose to protest said that their experiences did not match Dreger’s beliefs and that they found some of what she has published online to be transphobic.

Siblings, a transgender support and advocacy group on campus, detailed their concerns about Dreger’s work in an email sent out on the day of the lecture by Isaac Zerkle ’18. The email was also sent on behalf of members of blackOUT, Familia, Tea Talks, QTPOCC (Queer and Trans People of Color Collective), QCAB (Queer Council Advisory Board) and SAGA (Sexuality and Gender Alliance).

First, the email acknowledged the validity of some of the work that Dreger has done: “She has done a tremendous amount of research and advocacy on intersex issues that is important and much needed.” Then, the various groups explained why they believed she was not an appropriate speaker to bring to campus, namely that she was promoting incorrect theories about transgender people. “The Freedom Project is bringing in Dreger to talk about a controversy she is only tangentially related to on a disproven theory [autogynephilia] she has done no actual scientific research on.”

The problem, the email explained, is Dreger’s promotion of the autogynephilia theory. The email also provided links to multiple peer-reviewed studies that question this theory and noted that it may perpetuate harmful stereotypes of trans women as predatory.

In response to Dreger’s speech on campus, Siblings organized a response—a peaceful protest picnic outside of Clapp library while Dreger spoke inside.

“When you have someone like this being brought to campus, it’s very upsetting for us because we’re not widely recognized by society, or even just within the student body,” the protest organizer continued. “The student body’s getting a lot better about being accepting of trans people and using gender-neutral language, but even then there’s a lot of exclusion,” they explained.

However, the protest organizer was happy with the mobilization that came from the campus around Dreger’s presence at the school— even from the student fellows of the Freedom Project itself.

“I was really happy with the way that the students who are part of the Freedom Project responded,” they said. “A lot of them wore ribbons that were the color of the trans pride flag and stuff like that. So there was a mixed response, and overall I am happy about it.”

Around 6:30 p.m., students began gathering outside Clapp Library. Food and refreshment were provided from various members of the community. A group of supportive alumnae had pizza delivered. Tiffany Steinwert, dean of the Office of Religious and Spiritual Life, provided hot chocolate, and Ashraf Youssef, a worker at the Leaky Beaker, offered up apples. Some students brought Girl Scout cookies, and El Table donated coffee and tea. Around 7 p.m., one of the organizers, who has chosen to remain anonymous, told the gathered crowd—which had now swelled to over 50 people—that this was a peaceful protest, a celebration of trans students at Wellesley and a night of community.

When Dreger took the stage inside in the Clapp Library lecture room, she addressed the ongoing protest outside of the building, saying that she “actually [found] it very exciting” and a “sign of success [of liberal ideals] that students were free and able to demonstrate.”

The majority of her speech was dedicated to episodes she had witnessed during her career which she believed were indicative of rising censorship in academia and the loss of academic freedom. She detailed her initial involvement with research on intersex people as a doctoral student and later as a professor at Northwestern University. Most notably, she spoke of her support for J. Michael Bailey, a Northwestern psychology professor, who, in 2003, published the controversial book, “The Man Who Would Be Queen: The Science of Gender Bending and Transsexualism.” Bailey promoted the autogynephilia theory, which was what initially caught the protesters’ attention.

Dreger eventually resigned from her position at Northwestern, citing administrative censorship and, in particular, an episode regarding a 2014 publication of Northwestern University’s Medical Humanities and Bioethics Program for which she served as editor. Dreger bemoaned the corporatization of universities increasingly run by “people with MBAs rather than PhDs.”

Outside, Dean of Students and College Vice President Sheilah Horton and Director of Services and Programs and Advisor for LGBTQ Students Leah Fygetakis mingled with the protestors, expressing their support. “I want to be here to support all of our students,” Dean Horton said. “I understand that trans students felt especially concerned about the speaker here today, and I wanted to be here to support them and the students that support them.” 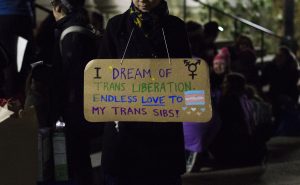 The group—still a few dozen students strong—moved inside, carrying their snacks and signs with them. They lined up in two rows outside the library lecture room, waiting for the attendees and Dreger to exit. They propped up their signs in front of them, which said things like “Trans women are women!” and “Trans sibs belong,” along with more humorous assertions like one sign which just read “autogyNAHphilia”.

When Dreger exited the lecture room, she was met with a silent throng of students carrying signs. She asked the group to speak with her, and some agreed. Other students, having read Dreger’s writing on autogynephilia, refused to engage with her. “We’ve seen enough,” one protester said. “You’ve already written what you believe.”

The protest organizer believes that Dreger’s invitation to campus goes against the administration’s statements that they welcome trans women here, even during the first year that the attendance of trans women at Wellesley has been part of the official admissions policy.

“Inviting her to campus goes directly against this whole idea of ‘trans women belong here!’ And it just goes to show that a lot of people maybe just say that because it’s the right thing to say, and they don’t really believe it,” the protest organizer said.