At the beginning of this school year, students were greeted with the news that Wellesley College would be partnering with a new bus company to provide shuttle service to Cambridge and Boston. Peter Pan Bus Lines was the original provider of transportation for Wellesley students, and received many complaints from students due to lack of quality service and frequent delays. In a statement sent out to students on Aug. 31, Peter Eastment, director of faculty housing and transportation, announced that Local Motion of Boston would be replacing the Peter Pan Bus Lines to “provide service for the Exchange Bus, the Senate Bus and Wellesley’s athletic team charters.” In addition to the new bus company, revised bus schedules for the Exchange and Senate buses were also released and first implemented on Sept. 1.

Last semester, on April 23, Dean of Students and College Vice President Sheilah Horton announced at Senate that the Peter Pan bus contract would be reconsidered. “Service will be the number one issue that will be talked about at the negotiation table,” said Dean Horton. She also added that “students will be in the conversation.” One student included in those subsequent conversations was Hanna Fernley ’20, who took the Peter Pan buses into Cambridge frequently for classes at MIT and work. “The old bus company didn’t care at all,” according to Fernly. “It was time for a change.” After communicating her comments about the Peter Pan buses with the Transportation Services office, Fernley was hired as part of the Transportation Advisory Committee to help Eastment with the implementation of a new bus system and schedules at the end of the 2017-2018 academic year.

The selection process started in the beginning of last summer, when 14 Request for Proposals (RFPs) were issued to bus companies in the Boston area. Eight bus companies responded to the RFPs. After a lengthy evaluation process, which included the participation of Eastment, Fernly, Dean Horton and several other members of the administration, two bus companies, Academy Bus Charter and WeDriveU, were selected as finalists for a contract with the College. “After we narrowed it down to these two, we were in meetings with them…and both of the bus companies determined that they just wouldn’t be able to do the schedules that we had,” Fernley recalls, with both companies citing ”multiple factors” for pulling out of the contract.

Eastment found Local Motion of Boston in August, an “owner-operator group transportation organization serving Boston, greater New England and points beyond,” according to their website. Local Motion and the Transportation Services Office collaborated to create a new schedule for the Exchange and Senate buses that had buses leaving from Wellesley every hour and a half. Lily Mohr ’19, an intern with the Transportation Services office, noted that “it’s hard because everyone has competing interests, and the schedule went through multiple rounds of finalization.” Mohr went further to describe the competing interests as being, “consistency, accuracy and ridership” and also noted that cutting back on later buses reflected the unwillingness of Local Motion drivers to work late hours on weekends. 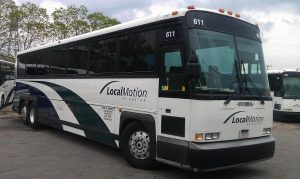 Immediately after Local Motion buses started rides on Sept. 1, students reported inconsistencies and errors with the new schedule and buses. The Wellesley Transportation Updates Facebook page, now manned by Mohr, Fernley and Eastment, served as a platform for students to report inconsistencies with the buses and faults of the new bus schedule and to contact representatives of the Transportation Services Office to report late buses, early departures and stranded students. Sidney Tischler ’19 wrote in the group on Sept. 1, “In light of these new updates, I’m personally very worried about everyone who goes out tonight getting back home,” and urged students to post pictures and updates about the situations of specific buses. Students were abuzz with feedback, uploading pictures of stranded students at stops and tagging Mohr and Eastment in posts to get their attention on the issues.

In response to the abundance of student feedback in the Facebook page, Kimberly Chia Yan Min ’19, a concerned student and former College Government President candidate, sent out a survey to students about the new bus system and schedule. “I thought it was important to give students a platform to think what kind of solutions there might be,” Min said. Min reported that she received 271 student responses on her survey, with a wide variety of student feedback and criticisms about the launch of the Local Motion buses. One student responded, “Since the start of the school year, I have already spent over $70 worth of Ubers and Lyfts to get back to campus safely because of late pickups and/or unexpected changes in the schedule that made it very hard to commute quickly.” Another student responded, “I have a second job in the city that I am starting this Friday from 5:00 to 8:45 p.m. Three and a half hours is hardly a quality shift, but I’m not able to start earlier because of how inconvenient the bus schedule is.” Viewing the responses, Min reported, “There is a real income issue that people aren’t talking about.” In particular, students reported that the buses were leaving early from stops and consequently leaving large groups of students behind. Furthermore, students initially lacked access to a reliable mobile app to track the buses or a hotline number to call the company to report complaints.

Min was not the only student vying to gather student feedback about the new transportation system. In response to buses stranding large groups of students in Boston early morning on Sept. 2, Celine Christory ’21 started a petition and urged students to sign it on the Facebook page. “We are 2,000 students and every voice counts,” Christory wrote on the page. Diane Schrenzel ’20 also emailed a petition out on Sept. 8, inviting students to sign if they “would like the situation to change for the better.” In response to other student efforts to collect feedback, Min said, “We really need to work together to consolidate petitions…I think [the Transportation Services Office and student interns] are receptive to productive solutions.”

But that has not stopped the slew of complaints that appear on the Facebook page each day. One student posted that “I don’t understand why it takes an hour aka the full 60 minutes to drive from Wellesley to the first MIT stop at 1 p.m. This is twice as slow as shown by Google traffic and the only reason I can think of is that the bus driver is intentionally driving slow to match the current timetable. But this is very inconvenient for students who need to get to classes at sharp clock [sic] and is also disrespectful of everyone’s time.” Yet another student posted, “the 9:15 a.m. bus appeared to not know where the Marlboro stop was or didn’t know about it, because it was on time but completely sped past the five students waiting there. The bus that was supposed to leave at 10:15 a.m. from Marlboro Market actually arrived at 10:04 a.m. and promptly left.” Another commented on the same post, “The new bus company is really getting to be intolerable.”

As an intern with the Transportation Services Office, Mohr was responsible for combing through the Facebook page and preparing a daily memo with student feedback for Eastment and Bob Bassil, a representative from Local Motion. In her memos, Mohr would include student complaints that were communicated to her through posts on the page, direct messages received on her personal account and sometimes screenshots of compelling student anecdotes about specific incidents. “Peter actually responds to every point that I make and so does Bob as well,” Mohr said, “so there’s a lot of accountability.” With every situation, Bassil and Local Motion management would track and explain the specific situation to Mohr, who would then relay the information to the Facebook page or the individual student.

Christory, the author of one of the petitions regarding issues with Local Motion buses, was contacted by Eastment to consult on the development of a new bus schedule. In particular, Christory noted, “Local Motion didn’t understand that the bus was needed for classes,” adding that “MIT classes [start] on the dot, so it gives students 10 mins to make it to the bus.”

Mohr posted on Sept. 13 a revised schedule, which will go into effect on Sept. 17. The newest bus schedule, which only addresses issues with the Exchange Bus and not those of the Senate, will have buses leaving Wellesley hourly, as opposed to the hour and a half from the previous iteration. After she took the bus at its launch, Tischler reported that the system seemed “much, much better.” “I left Chapel right at 7 and got to the first stop a little early, but [it] stayed there,” Tischler recalls. The new schedule did not come without controversy. Revisions did not address the Senate bus schedule—Mohr commented on the post that announced the new schedule on behalf of Eastment: “At this time, no Senate Bus schedule changes are planned. Local Motion has added buses to the late night Friday and Saturday runs to increase capacity.”