On Wednesday, Sept. 26, the Task Force on Speech and Inclusion held their first town hall. The Task Force was created after President Johnson’s call last April for the formation of a task force to make recommendations to upper administration about how best to promote free speech at Wellesley.

Provost Andrew Shennan explained in an email why a task force like this is needed.

“We need a task force because our college (like the nation) is trying to figure out how best to navigate our way through a period of intense political and cultural polarization, polarization that tests our capacity to fulfill our mission both as an educational community committed to truth-seeking and the free exchange of ideas, and as a diverse and inclusive community committed to giving a voice and a sense of belonging to all,” he said.

Over the past year, protests against speakers the Freedom Project had brought to campus, and protests over the college’s use of fossil fuel, have raised questions about how to balance free speech and safety at Wellesley.

The students on the task force include Tyanna Crump ’19, Irena Preja ’21, Kaila Webb ’20 and Hannah Weisman ’19. There are also four staff members on the task force  — Christine Cruzvergara from Career Education, Lauren Haynie of PERA, Assistant to the Vice President Lauren Haynie and Ines Sendoya from Department of Student Life — and four faculty members — Professors Brenna Greer of the History department, Diego Arciniegas of the Theater Studies department, Kathryn Lynch of the English department and Sara Wasserman of Neuroscience — to make a total of 12 members. This town hall, the first of two scheduled, is meant to further the Task Force’s charge from last spring. “The work of the Task Force will result in a set of recommendations to the President for creating a campus environment that supports freedom of speech and intellectual challenge through thoughtful and respectful engagement. The recommendations will form the basis for a set of guiding principles on speech and inclusion at Wellesley College,” according to an official statement from President Johnson on the Task Force website.

The Town Hall was moderated by Greer and Cruzvergara. The conversation focused on the shared intentions and expectations of discourse on campus. The room, which was primarily full of staff and professors and under a dozen students, discussed what the benefits and risks of bringing controversial speakers to campus, and how the college can support students in responding to those speakers.

Elizabeth Mandeville, director of Exploration and Experiential Learning for Career Education, said “When I think about this topic, and I think about this community, one of the things we have to acknowledge is how painfully difficult it is to engage in these conversations, and that it is not intuitive to anybody to do them well.” She said that the task force might come up with a framework for these sorts of discussions, from which students and faculty alike might work. “What are the guidelines, what are the expectations for our community?” she asked. “What is our hope for trust, what is our hope for inclusiveness? What are the rules this community needs to learn to do this well? … Without modeling that here I don’t think we can make progress.” 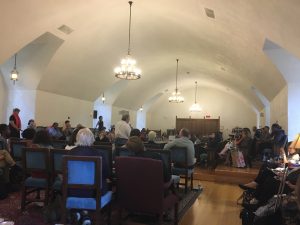 While many professors in the audience talked about the necessity of intellectual rigor, and of accepting all opinions on this campus as a way of furthering on-campus debate, others at the town hall pointed out that not all opinions are of equal intellectual rigor — some are in fact biased and ill-informed, based more on prejudice or ignorance than on fact.

“How do we deal with an opinion that’s poorly formed and does not hold intellectual rigor?” asked Kimberly Chia Yan Min ’19, the newly elected College Government president. “Can we treat all opinions the same way if your opinion is ill-informed? For me, that’s really important. Wellesley is an institution that prides itself on intellectual rigor, so if we are not going to hold ourselves to that kind of expectation, and just let any opinion pass, and give it the same place, and the same power and attention, what does that mean?” she continued.

Other students and professors noted that it would be better to discuss an issue that so directly affects students in a town hall with more students present. “There aren’t a lot of students here,” Professor Greer said at the meeting. CPLA chair Ninan Pollack ’21, who was at the town hall, agreed.

“The fact of the matter is that, it is community time, there shouldn’t be anything preventing students from being here, and that like, me coming here — I saw this on email, I heard it from a few other people, but I was wondering whether or not the task force has considered reaching out to student groups specifically to publicize these town halls, these listening sessions … because there is an email problem on campus.” Pollack said. “Within an hour, you can get 25 emails, so even though this is a really important conversation, students might miss that this is happening, just because it gets buried in everything else.”

In the end, this was only the first of a series of town halls, and rather than deciding anything, much of the time was spent trying to determine what, in fact, the problem with free speech and inclusion on Wellesley’s campus really is — whether only certain opinions are being valued in the student body, or whether minority opinions are shut out.

Multiple town hall attendees, including Professor of Religion Sharon Elkins, spoke of the idea that students felt they “had to protest” certain speakers, and there was no way to respond outside that obligation. She wondered what it means that Wellesley keeps bringing speakers to campus that inspire that kind of obligatory response in students.

Phyllis McGibbon, Elizabeth Christy Kopf professor of art, hoped that this town hall would inspire further reflection: “I hope that in an environment like Wellesley, that we could find ways to reflect on whatever happens.” She hoped that Wellesley could learn to be more proactive, rather than forcing students into protest. “I feel sometimes that when we are in difficult conversations or resisting difficult conversations, that one of the things that seems to be happening is that we are very focused on the specific event, or person or speaker, or interpersonal dialogue, and we don’t think afterwards perhaps as much as we could. Coming from a studio art perspective, I know that sometimes the best way to see something clearly is to resist the rush to judge — to keep a critical awareness, but sometimes to step out and see it from other points of view.”

Provost Shennan hopes that attendance at future town halls will be higher. “I think the task force hopes for more student participation at future town halls.  My hope (and expectation) is that, after a period of careful listening and deliberation, the task force will offer strong and judicious recommendations that will enjoy broad support within our community. The next Town Hall will be held this Wednesday, Oct. 3, from 6 p.m.to 8 p.m. in the Academic Council Room.