First recreational marijuana shop to open up in Boston (Update!)

In last week’s Outside the Bubble column, we learned that the first recreational marijuana dispensary would be coming to Boston. The closest ones are currently in Northampton and Leicester, both over an hour away.  Now, Boston Mayor Marty J. Walsh, in an interview with WGBH Public Radio, has revealed where the first one will likely be opening. He said that the city has received over 50 applications from various cannabis companies and speculated that the first would open near the North Station area, near TD Garden.  The shop that will probably open is called Ascend, and it is run by former Suffolk County sheriff Andrea Cabral. In her own interview, Cabral tentatively said that the dispensary would likely be open by late fall 2019. Discussing the opening, Walsh added that part of the reason it took so long was because of the opposition of some people in the Boston area.

Many don’t know that President George H.W. Bush, who passed away this week, was actually born in Massachusetts and not Texas, the state he is frequently associated with.  In fact, he was a native of Milton, Massachusetts, though he only lived there for six months before his family moved to Connecticut. Eventually, Bush returned to the Bay State to attend Phillips Academy in Andover for many of his formative years.  A number of local residents and Bush admirers from further away came to his Milton home in order to pay their respects, dropping off flags and other mementos at a plaque marking his birthplace. Massachusetts Governor Charlie Baker also posted a photo on Twitter of Bush with Tom Brady, commemorating his legacy.

$16,000 worth of handbags stolen, other crimes reported in Melrose 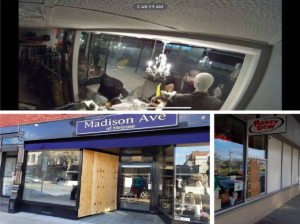 Thousands of dollars of Louis Vuitton handbags were stolen from a Melrose shop Photo Courtesy of Patch.com

On Nov. 30, late in the night, thieves broke into a Melrose-area shop called Madison Ave Boutique & Consignment, stealing 15 Louis Vuitton handbags worth over $16,000.  There were also reported attempted break-ins at several other stores, including Honey Dew Donuts and Perella Jewelers. Some windows of these stores were broken with hammers by the thieves, but no merchandise appeared to be taken from the inside; a rear window was also broken at Melrose High School.  It’s bad timing, as downtown Melrose was celebrating “Home for the Holidays,” an event that was meant to promote and encourage shopping at small businesses in Melrose. So far, the police have not identified any suspects, but Perella Jewelers’ surveillance camera captured two individuals in dark clothing trying to break the store’s glass.