On Jan. 30, the weather was blisteringly cold and snow was coming down from the sky. That failed to stop the group of approximately two dozen people gathered in front of Wellesley Town Hall that night, about ten of whom were Wellesley students. Wrapped up in hats and coats, they held signs with messages such as “Wellesley supports Indigenous People’s Day” and the more direct “You are on stolen land.”

Over the past month, leaders in both the town of Wellesley and the college have circulated a petition to change the celebration of Columbus Day to Indigenous Peoples’ Day. To date, the petition has gathered over 1,000 signatures. On the evening of Jan. 30, the petition was to go before the Advisory Committee at the Wellesley Town Meeting, the town’s highest legislative body.

Native American activists Mahtowin Munro and Joan Aandeg spoke before the gathering outside, as did Michelle Chalmers, leader of the inclusivity advocacy organization World of Wellesley. “I’m the leader of Indigenous People’s Day MA, and a longtime Native activist,” Munro said. “It’s not only Wellesley –– cities and towns across the country, and even states, are becoming increasingly aware of how offensive it is to Indigenous peoples to continue to celebrate our genocide, when Christopher Columbus is celebrated as an official public holiday. For decades now, Indigenous peoples have been saying that instead of Columbus Day, which needs to be abolished, Indigenous People’s Day should be celebrated.”

Next, she said that she hopes Wellesley College will honor Indigenous Peoples’ Day. The organizers took the large contingent of Wellesley students at the rally as a good sign. These students, mobilized by a campus-wide email from Kisha James, leader of Wellesley’s Native American Students Association, represented a large base of support on campus. Erin Battat, visiting lecturer in the Wellesley writing program, also attended the event with her two sons. At other colleges and universities, however, it has not always been easy: when the city of Cambridge adopted Indigenous Peoples’ Day in 2016, for example, Harvard University refused to follow suit, until pressure from their dining hall workers’ union forced them to relent. Here, Munro hopes that through a coalition between Amnesty International Wellesley, the Native American Students Association and other students, faculty and staff, the school will quickly move toward recognizing Indigenous Peoples’ Day. 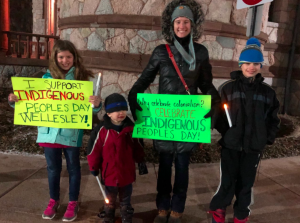 In the town of Wellesley, however, the measure is not without opposition. On Jan. 17, after the petition for Indigenous Peoples’ Day was initially announced, a disgruntled letter to the editor from a Wellesley resident appeared in the local paper, The Wellesley Townsman. Frank Pinto sees the move as an attack on his Italian heritage: “a lightly disguised attempt to somehow undermine all the contributions to society that Italians associate with Columbus Day,” he said. In addition, he claimed that the petition conflicts with Wellesley’s Tolerance Pledge, asserting that this is a form of discrimination against him as an Italian-American.

Much of Wellesley, however, feels that this change is long overdue. In particular, among the youth of the town, support is strong: three Wellesley Middle School seventh-graders came out to the Town Meeting Advisory Committee to give official statements on why they believe Indigenous Peoples’ Day is necessary. One student, Emma Hammond, said that this change would lead to more accurate educational practices in Wellesley schools, where she didn’t learn the more complex truth about Columbus until the seventh grade.

“My education on Columbus has been mainly inaccurate, until I got to seventh grade,” Hammond stated before the advisory committee. “Most sources about Columbus show him as the hero, but it isn’t very true. Once Columbus left America, only 33 percent of the Indigenous people were still alive. So why are there so little sources that show the ugly side of Columbus?”

Her classmate Zach agreed, “Why should we celebrate someone who murdered innocent people? I think we should change it to Indigenous People’s Day, because there are many Indigenous people who aren’t recognized enough.”

In addition, several Indigenous residents of Wellesley went before the advisory board to speak on their personal experiences. Joan Aandeg, who is an Anishnaabe woman, has been living in Wellesley for just over six years. “I am here because Indigenous people on this landmass — our existence has been erased from the consciousness of America, and this has happened in part through things like celebrating Columbus. America continues to dehumanize Native people, through stereotyping, through violence, through cultural appropriation…Columbus for us represents genocide, he represents the beginning of the destruction of our civilizations that existed for more than 10,000 years. ”

Kisha James ’21, daughter of Mahtowin Munro and leader of Wellesley Native American Students Association, explained to the committee why she rushed straight from choir practice to be there: “The reason why I’m here is I’m an enrolled member of the Wampanoag tribe of Gayhead-Aquinnah,” she said. Speaking on behalf of many Wellesley College community members, she told the board that there is wide-ranging backing for this petition in the college community. “On Wellesley’s campus, there are a lot of faculty members and students who really support this resolution. A lot of us were out in the snow holding signs earlier, and if any of you know college students, you know how hard it is to get college students to do anything, so that really shows how committed people are, especially because they were out in the cold,” she said. “I mean, we can’t even get people on Wellesley’s campus to do things on Wellesley’s campus!”

Tom Skelly Jr., head of the Advisory Committee, questioned James about her “experience being an indigenous person,” and also asked her details as to the name of her tribe. As for her experience, James told a story of being forced to re-enact a stereotyped version of a “Columbus and the Indians’ story” in elementary school. “Having my teachers and these authority figures tell me that the deaths of my ancestors didn’t matter. For the first time, at the age of five, I really felt like I didn’t belong in this country, because of this,” James recalled.

On Mar. 25 and 26, the full Wellesley Town Meeting will be held and this resolution will be seen. The group of activists are pushing for this resolution to be enacted soon, so as to lessen the damage done and misinformation spread in the community through the celebration of  Columbus Day. “Not only is it damaging to Indigenous kids, to be celebrating Columbus Day, but it’s damaging to non-Native kids, too,” Munro said. “Because when you’re taught that Columbus discovered America, even as a very young kid, you get this idea that there was no one here, or that people were simply waiting to be discovered.”