In an effort to create a stronger sense of community in campus living spaces, Wellesley’s Office Of Residential Life will be introducing changes to the blocking system for the upcoming 2019-2020 school year. Previously, students who wanted to live in the same area as their friends could request to do so in groups as large as four students and were not guaranteed living spaces on the same floor, or even the same dorm.

“When you blocked with others, you could choose any rooms in a building complex,” says Olivia Salomon ’19 house president of Severance Hall, of the previous housing policy. “These meant that four people who ‘blocked’ together could have two people living in Tower and two people in Severance. There was no way of knowing if you’d be able to get on the same hallway or even the same building as your block-mates – blocking only meant that you were able to choose your rooms at the same time.”

That will no longer be the case. Starting next year, students who choose to block together may do so in groups of five to seven students.

“Changes to the blocking system begin with students’ ability to identify their Block Group when they complete their housing application the first week in April,” says Meghan Todd, assistant director of student housing. “Blocks will be between five and seven students. The whole block will then be assigned the same time slot in which to select rooms, and the group’s Block Leader, who can be any member of the block, will log in to select a block of rooms for their group at that assigned time. The rooms available during the Block Housing phase of room selection will be shared with students in preparation for the room selection process, allowing students to plan around the location and number of spaces available and fitting for their Block Group. Block Groups will be required to fill a given block of rooms in order to select that space.”

The Office of Residential Life has identified a number of dorms on campus that can accommodate groups of students who want to block together. One of those dorms is Munger Hall. “There will be a number of areas in Munger in which to block, so if you want to guarantee those who will surround you, that’ll be your best bet, and theoretically if lots of people do that, then there will be lots of clusters of friends in Munger,” says Liz Borecki, a sophomore Resident Assistant in Bates Hall. 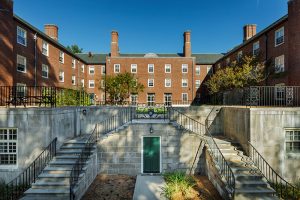 According to Todd, these changes are a part of a larger effort to create a stronger sense of community in Wellesley’s dorms. “We believe these changes will contribute to increasing students’ sense of belonging in our residence halls, and will allow students to build and sustain community in spaces they are familiar with and with friends they have strong connections with,” says Todd. The proposed changes also aim to combat current barriers to creating cohesive community in the residential halls. “It was explained to members of residential staff that in the past if you only blocked with one other room, then you wouldn’t create community with everyone, just the one room,” says Borecki. By allowing more students to block together, the Office of Residential Life aims to create a more connected living spaces and cultivate a more social atmosphere in campus living spaces.

Salomon is optimistic about the proposed changes. “I think this is an improvement on the current system, because it will be really helpful for fostering community when there are people who have already formed a community living on the hall – it can be easier to make friends when you already feel comfortable in a space,” says Salomon. “It is also a better way of making sure that you’ll live closer to your friends.”

Borecki is more cautious about proposed changes. “I think it’s neither an improvement or worse, just different. [The changes] could possibly do the trick in terms of sending more love to Munger,” she says. “But it might be worse if you end up in Munger and you weren’t one of the blocking groups.”

Todd encourages students with questions or concerns about the new process to reach out to the Office of Residential Life.

“So far, the feedback we have received in Senate and from our student Res Staff members has been positive and incredibly thoughtful,” she says. “We would encourage students to continue to share their feedback with us as the process gets underway. We in Res Life and Housing are beyond excited to be bringing room selection online, as well introducing a new process that will be low-stress, convenient, and transparent for Wellesley students. We hope students feel as great about the introduction of StarRez as we do and we welcome questions, concerns, and ideas from students. We will be out and about on campus, in the dining halls, and on Facebook @WCResLife in order to be as accessible to students as possible throughout the Fall Housing Selection Process.”