A first-generation college student, Isabella Garcia ’22 arrived at Wellesley this fall with the intention of being pre-med. “Before I came to Wellesley, I thought I wanted to be a surgeon,” she says. Garcia continues, “I wanted to be a neurosurgeon because I had friends and family members who passed away because of brain cancer, and I wanted to do something to address their problems.”

However, over spring break, Garcia decided not to continue with the pre-med track. She felt like she wasn’t getting the support she needed. “I kind of wanted there to be more support and it didn’t really feel like it was there at the time. I felt like I was pulling teeth to get help,” she explained. Garcia also felt limited by the pre-med track’s strict requirements. “I felt very confined by the Wellesley pre-med track … just because there are so many classes you have to take. I really like STEM but I also like the humanities, and I think there is a difference between wanting to take a class and having to take a class.”

Garcia’s sentiments are not uncommon among Wellesley students hoping to follow the pre-med track. In order to comply with national standards, Wellesley pre-med students must complete a predetermined sequence of math and science courses, namely five semesters of chemistry —  two semesters each of inorganic and organic chemistry and at least four semesters of lab —, and two semesters each of biology and physics. Additionally, most medical schools recommend students take courses in English, to hone their writing skills before medical school.

Some suspect that Wellesley’s de facto grade deflation policy may be to blame for the discrepancy in Wellesley’s medical school admission rates. When asked whether grade deflation had any impact on her medical school application process, Dominiki Kurz ’20, a pre-med History major, said, “For sure, I’m constantly stressing about getting into medical school. I have peers at other universities also applying to med school but their work is 1.) not up to our standards in terms of quality 2.) not as intellectually rigorous. But they still numerically might have higher GPAs. And it’s incredibly frustrating to think I will be in competition with these people.”  She added, “Some med school applicants might have crazy high GPAs like 3.97 or 3.95, and how could anyone at Wellesley ever compete with those numbers because of grade deflation?”

When Emily Liao ’19, a pre-med student who has already applied to medical school, was shown these statistics by The Wellesley News, she revealed that she was aware of this discrepancy. According to Liao, “Statistics like these kinds of pushed me to work harder on my application.” She continues, “Something that I would like to see is how broad of a range of schools these students applied to, how many institutions they applied to and what was their strategy in applying. If Wellesley students are very selective about the schools they apply to, this might reflect negatively in the admissions statistics.” 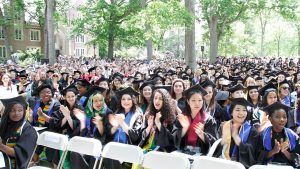 Many Wellesley graduates are not being accepted to top-tier medical schools, unlike at comparable institutions Photo Courtesy of Wellesley College

Kurz ’20 is a pre-med History major who transferred from Emory University after her first year. Speaking about her experience at Emory, Kurz says, “I transferred from Emory and something that I didn’t really like there was that a lot of students were very pre-med. Probably about 30-40% of the students in my class were pre-med, and I remember there were students who were breaking down in classes because they didn’t get As on exams.”

Kurz applied to Wellesley because she wanted a more well-rounded liberal arts experience as an undergraduate. “I wanted to go to a liberal arts school where students were more chill about things. I wanted to take a deeper array of classes, and something I encountered at Emory was that students were only taking pre-med class because it prepared them best for med school. Something I appreciate at Wellesley is the rich amount of opportunities and experiences I’ve been provided with so far… I feel like I’ve gotten so much out of Wellesley.”

When The Wellesley News asked if she would transfer to Wellesley again, considering everything she knows about grade deflation, Kurz was ambivalent. “I have no idea – I’ll let you know after I apply to medical school … it was definitely easier to perform well at Emory instead of here.”

Cindy Seltzer, the newly appointed Director of Health Professions advising at Wellesley, revealed that there might be another reason for Wellesley’s lower medical school acceptance rates. According to Seltzer, “We support everyone who applies [to medical school]. So what happens is sometimes some people are better off waiting another year before application or waiting to take the MCAT. We encourage everyone who applies, regardless of whether they have the statistics or grades or not.”

The Wellesley News reached out to pre-med advisors from Smith and Swarthmore, peer institutions with markedly higher rates of medical school acceptances than those of Wellesley, to see if they had a similar philosophy when it came to medical school applications. Dr. Gigi Simeone ’74, the Health Sciences advisor at Swarthmore, wrote in an emailed response that unlike Wellesley, Swarthmore does not institute a policy of grade deflation. Similar to Wellesley, according to Dr. Simeone, “Swarthmore supports every student and alum who wants to apply, and we count them in our statistics. Because applying to medical school is costly in terms of time, money and emotional energy, I feel it is important to give students and alums my honest assessment about how they’ll fare in the process, and that is sometimes negative. But it is ultimately their choice.”

A source who wishes to remain anonymous responded to this information, “Yeah, I’m not surprised – I’ve definitely heard of some schools discouraging students who don’t have the appropriate GPA from applying to medical school.”

For pre-med students at other schools, it’s also common to wait a year or two before applying to medical school in order to build up their resume and gain more experience. According to Dr. Simeone, “nearly all of [Swarthmore’s] applicants wait. Some do it to enhance their credentials; others to have a different kind of experience between two very intense academic experiences.” Pre-med students who do not take time off before medical school are competing against students who have had more time to develop their applications, potentially contributing to lower admission rates. At Wellesley, among pre-meds, about 20 percent of students apply directly to medical school after college.

An anonymous source confirms that she isn’t sure whether grade deflation or imposter syndrome is to blame. “My friend last year was a bio major and she was kind of shocked about the types of schools Wellesley students were applying to.” The source continues, “Wellesley is a great school and really high ranking, but most of the schools [my friend] heard Wellesley students applying to were not that highly-ranked. I’m not sure if that’s a product of grade deflation or imposter syndrome.” She adds, “Since the world is shifting to a more STEM perspective, being in the liberal arts, you know, students might not feel like they have the technical background, and that’s why they might not choose to apply to highly ranked schools. But it’s also just generally getting more competitive.”

Garcia is glad that she decided not to continue on her pre-med path. “Overall, I am glad with the choice I made not to continue the pre-med journey. It was a personal decision that I made based on what’s best for me. I would want to wish any students going on this path the best of luck. I would hope that the lack of resources of Wellesley’s campus is not detrimental to these students at all in their future paths, and that these students are able to prosper as Wellesley women in the future.”