The only candidate for CGVP is Felicity Pollard ’21, who is running unopposed so far. Her platform rests on three primary ideas, “promote[ing] institutional memory, amplify[ing] student voices and [improving] CG-Admin Connection.” According to Pollard, “Given that ARC [Appointment Representative Committee] is a brand new committee, meticulous record keeping and thoughtful documentation of all thought processes and decisions is essential so that future CGVPs have a clear understanding of ARC’s past work.” During the CG Special Elections debate, Felicity remarked, “Student Representatives are such an underutilized tool on this campus and the fact that students can’t know who is on them right now is really appalling.” She plans to build a stronger network among the student representative and make the CGVP more available to them. 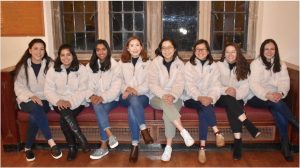 Sarah Sansón Hernández ’21 currently sits on CG Cabinet as the current chair of communications and finances. She is running on a platform based on three principles: Train, Cement and Collaborate. She wants to inspire a sense of togetherness among the executive boards of organizations by modifying the training of the positions of President, Events Chair and Publicity Chair. If elected, she said that her primary contribution will be “Instead of focusing on deadlines and all the nitty gritty stuff, [to] focus more on what the mission statement of that org [organization] is and also the communities inside organization.” Throughout the academic year, she hopes to organize community events among the executive leadership to promote collaboration and cultivate the skills they learned during their training.

The other candidate running for Organizations Chair is Alexis Rivett ’21. Rivett is running as a write-in candidate. Her candidacy was declared on April 20, 2019, later than the CG Special Elections Debate. Alexis’ platform relies heavily on her past experience as a Student Organization Funding Committee (SOFC) member, where she had extensive dealings with organizations. In her SOI, she states, “I understand the struggle of trying to build a new organization. Last semester, I was co-president of an organization that was not yet recognized. It was extremely frustrating to not have access to resources that other orgs had. That’s why I plan on making the process towards recognition more accessible for everyone.” Alexis’ goal as Organization Chair is for CORA is to collaborate with the Office of Student Involvement and the organizations to further cement their working relationship while working with each other. Additionally, she believes that unrecognized organizations should have a bigger platform and a support system, which will guarantee them some resources on campus.

The CG Special Elections are the product of a hastily passed Constitution Amendment, which was even put to the vote of the wider campus population. In order to put the amendment changes to effect, this election will determine the success and effectiveness of these changes and whether they will achieve the desired results that were intended by the College Government when it was passed.