On April 24th, Wellesley student Aurorah Arndt ’21 posted a video on Facebook in which she detailed a recent interaction she had with Health Services and campus police. In the video, Arndt claimed to have been left on the steps of Stone-Davis at 5:30 PM the previous day after being released from the hospital. “I had been calling the support services on campus since 3:30,” she says. Despite this, Arndt — who suffers from Postural Orthostatic Tachycardia Syndrome (POTS) was unable to find someone on campus who would give her a wheelchair. She, along with friends and Stone-Davis Area Coordinator Martha Zamora ended up on the steps for “about an hour,” according to Arndt’s testimony, asking different college officials if they could furnish her with a wheelchair so she might navigate campus. Eventually, Arndt said, two of her friends found an office swivel chair inside the building and were able to carry her inside.

POTS is a condition that causes changes in posture, such as from sitting to standing, to trigger an abnormally large shift in heart rate, which commonly leads to fainting and nausea. Arndt has had previous experience with this condition: “In high school, I got really sick,” she said. “I was in a wheelchair for a month or two, and had to take time off.”

By the end of her first year in college, however, she was no longer experiencing symptoms. Rather than being in a wheelchair, she was even running “five, ten miles every day,” she recalled.

But this year, when she had her wisdom teeth removed, it triggered her POTS again. “I was in the ER for two days,” she said, and that after that she was in the hospital for the better part of a week until doctors believed she could walk unassisted again. She completed a 150-foot walk, and was able to take an Uber home alongside her friend Hala Lofti ’21.

“In the beginning of things, I was there a lot. I was there with her on the way back from the hospital when she was stuck on the steps for over an hour,” Lofti said. In the Uber back, according to Lofti, is when their troubles began. “We were in the uber back, and….Aurorah started making calls,” she said. But no one on campus seemed to know who she was supposed to be talking to. “It was this back and forth of, we’d call Health Services, and they’d tell us to talk to campus police, and they’d send us back to Health Services.” By the time the two returned to Stone-Davis, Arndt was unable to make it up the steps and had as yet not been able to get a wheelchair. At this point, it was after 5:00 PM, according to Arndt’s video, so Health Services was closed. However, Campus Police cannot retrieve medical devices such as wheelchairs from Health Services without a medical provider’s permission. This left Arndt trapped.

“Nobody really wanted to take responsibility for it,” Lofti said. Nobody thought it was really their problem. And then when we got back to campus, Aurorah couldn’t make it up the steps.”

After Lofti, Arndt and Zamora had all unsuccessfully spoken on the phone with various college officials, Arndt’s friends carried her inside on a swivel chair. Though Arndt said she initially had no intention of filing a report, Zamora did so on her behalf. “I wasn’t actually going to file a report, and I wasn’t that upset,” Arndt said. “I was like, this is an administrative issue, it’s not that big of a deal. But I was also frustrated with how long it took.” 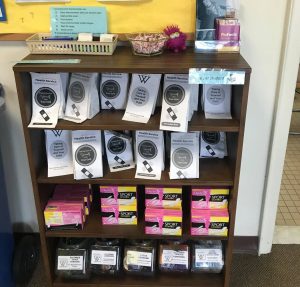 Although Assistant Dean of Students Carol Bate cannot discuss Arndt’s case in detail for confidentiality reasons, she noted that sometimes, failures of communication between the school and outside care providers can happen, particularly when a student is not on Wellesley-provided insurance. “Communication back and forth between the hospital and the college can be important, so the college knows when you’re being discharged,” she said. “Sometimes [when there is an off-campus provider] the college doesn’t even know when a student returns from a hospitalization.”

The wheelchair Arndt was ultimately offered, through Accessibility and Disability Resources (ADR), was, according to Arndt, picked up from Goodwill by Director of Accessibility and Disability Resources Jim Wice. This wheelchair, however, had a broken foot pedal, making it less useful for someone like Arndt who has use of her legs. Currently, she is using a wheelchair provided not by the college, but by a classmate’s mother.

Dean Bate is working to make it so that procedures for obtaining mobility aids — and for obtaining healthcare in general are clearer for the Wellesley student body, she says. Currently, ADR website includes no section on how to access resources when a sudden health problem arises. “I actually think our website…the ADR website…it would be great if it included that section,” Bate said. “That’s something we’ve talked about, is providing instructions for how to do that online. Because students don’t typically associate a temporary disability with needing ADR…I think we need to do a better job of educating students that that’s also where you go when you need temporary accommodations.”

On campus, there has been a recent upswing in advocacy around making Wellesley more accessible to all students, especially those with any kind of disability. In the fall, Students for an Accessible Wellesley was founded, quickly gaining members and a presence on campus. In the spring, Wellesley for Adequate and Accessible Resources (WAAR), a student group with about 20 members, protested at Spring Open Campus and distributed a petition and list of demands, mostly centered on accessibility. Some of those demands — such as the request for an accessible entrance at the Stone Center and an access van with a wheelchair ramp — have been met, while others have not. Organizers from WAAR have been meeting with Dean Sheila Horton over the past week to attempt to figure out better policies for accessibility on campus.

Arndt, meanwhile, is starting a campaign of her own. As she was being interviewed for the Wellesley News, she gestured around her room. “I’ve been learning to screenprint,” she said, revealing shirts printed with the phrase “Where’s my chair, Wellesley?” She intends to sell these shirts as a way of creating awareness about accessibility issues at Wellesley and pressing the school to create a more clear policy for re-entry into the school after having to leave for health reasons.

“The thing that I’m upset about is not that I think that…they aren’t trying to meet my needs,” Arndt said. “I’m just upset that it affected my care, and how I was treated. I want there to be a better system, for there to be a policy for this. I want to see the documentation associated with the process, with how I was supposed to get a chair. Because I was in contact with people a week before I left.”