This past Sunday, Professor Corrine Taylor and her daughter Rebecca Taylor ’17 appeared together on the Diana Chapman Walsh Alumnae Hall Auditorium stage in complementary black and silver dresses and moved gleefully to the song “Puttin’ On the Ritz.” Corri, Rebecca and the 350 spectators were celebrating the third annual Vintage Vogue Runway for Research fashion show, an event organized by Carol’s Corner, a local non-profit dedicated to improving the lives of people with metastatic breast cancer (MBC). This was the first time the event took place on Wellesley’s campus, and it raised approximately $75,000 for research on MBC at the Dana-Farber Cancer Institute.

Professor Taylor said she wanted to bring the event to Wellesley because she believes “that at our top women’s college with a big STEM focus, many of our science majors would be professionally interested in learning more about cutting-edge research on MBC, and that on a personal level, all women should understand more about this stage of breast cancer, for which there is treatment but no cure.”

Professor Taylor has taught at Wellesley College for twenty years and served as the director of the Quantitative Reasoning (QR) Program for seventeen years. The issue of MBC became personal for her in 2015, when she was diagnosed with the disease de novo during a routine mammogram. Carol Chaoui, the founder of Carol’s Corner and Taylor’s longtime friend, has lived with breast cancer for ten years and MBC for four years. The friends have worked together since their diagnoses to raise funds, educate the public on MBC and support each other during the journey.

Professor Taylor expressed that “from the beginning of knowing that we both had this disease, we decided that we didn’t want to join online groups of MBC patients. We just wanted each other to talk to. I realized that it’s important to have someone who knows what you’re going through when you’re dealing with something like this.”

Ann Velenchik, the dean of academic affairs at Wellesley College, gave the opening remarks at the fashion show. She said in a statement to The Wellesley News that the work Taylor and Chaoui put into the event “showcases the power of friendship, particularly among women, to nurture and support us through the most difficult times and to make the world a better place.” She added, “No one I know embodies the idea of loyal and enduring friendship, in bad times and good, in celebration and in work, better than Corri Taylor.”

After Dean Velenchik opened the Vintage Vogue event, President Paula Johnson gave her remarks, where she praised Professor Taylor for her commitment to raising awareness for MBC and for the contributions she has made to the Wellesley community. Taylor and Chaoui then joined leading MBC oncologists and researchers, Drs. Eric P. Winer, Ian Krop and Nancy Lin on stage for a panel, where they discussed the disease, barriers in treatment and the progress the medical community hopes to make in the future. Dr. Winer hopes that in ten to 15 years, MBC will either be curable or a chronic illness that patients can live with over a long period of time. 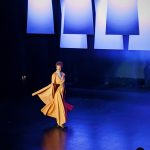 Marc Tetel, a neuroscience professor at Wellesley College, was one of approximately 30 models who took the stage on Sunday night in support of the fundraiser. He thought that the expert panel “addressed a number of important issues around MBC, including how it can spread to the brain and some of the subsequent effects.” What struck him most about the evening, however, was “how inspiring it was to see Corri and her daughter Rebecca walk the runway together.”

Rebecca told The Wellesley News that she felt “honored” to join her mother on stage for the second year in a row. When a close friend asked her if she felt sad given the event’s purpose, Rebecca said no. Instead, she felt “cared for” because of “all the hard work people put into the show so my mom and I could share a glamorous evening together with her loved ones.” The environmental research analyst added that the event gave her hope that “in the future, there will be no more MBC diagnoses, or that such a diagnosis will not be life-threatening.”

Professor Taylor also walked away from the event feeling hopeful about the future. She acknowledged that the research being done on MBC will not affect her prognosis, but she is moved to know that “the current research can do something for future generations. To know we are having a part in that is really rewarding.”

Professor Taylor feels confident that the curriculum at Wellesley College prepares students to make the best decisions for themselves if they were to face an illness such as MBC. She wants students to remember that “the quantitative reasoning they learned at Wellesley, whether it was the QR 140 or their Stats courses, are intended to make sure they have the capacity to understand the statistics that affect them in everyday life.”

She added, “When sickness happens, you want to know how to maximize your probability of doing well. Your doctors, of course, know a lot of things, but when options are presented for different kinds of treatments, you need to know how to weigh those options. These are the kinds of critical thinking skills that students develop at a place like Wellesley.”

Professor Taylor hopes that the Vintage Vogue Runway for Research can take place at Wellesley every year and that more students can become involved with the event in the future. She said, “I heard from so many people from the town of Wellesley that they love the venue, they loved seeing the campus, and they loved forming a connection with the school. People within the college were just really pleased to sponsor the event, which is raising money for something that is primarily a women’s issue.