Anju Madhok ’18 (they/them) has recently found their place as an artist in the music world. During their time at Wellesley, they majored in women’s and gender studies and utilized music department equipment to record and produce music. So far, Anju has five projects, three of which are available on BandCamp. Most recently, Anju has released a single on BandCamp and Spotify titled “Fill Into Me.” During our conversation, we discussed identity, inspiration and Anju’s lifelong musical journey.

From a young age, Anju took private violin and piano lessons that focused mostly on the Western canon. “I remember being a kid and seeing Norah Jones on the TV and saw her playing the piano and singing at the same time. Up until then, I didn’t know that you could do something like that. I thought you had to read and memorize music and then play it from memory; I didn’t know that you could sing also,” Anju recalled. This exposure to a singer/songwriter stuck with Anju, but they were still just singing for fun or in private moments while taking a shower.

It was not until late in high school that Anju began performing at open mics and talent shows. Though they were mostly performing covers at these small events, Anju soon began writing songs and finding their voice. After finals their senior year, they were encouraged to do a project or internship in the two weeks before graduation. Anju took this space to craft a CD, complete with album art and CD sleeves. They passed out the project to teachers and friends. “This happened to wrap up around early June, which is near my birthday,” recounted Anju. “Over the next four years, I put out music in the summer and found my production and songwriting skills getting more smooth and sophisticated.” 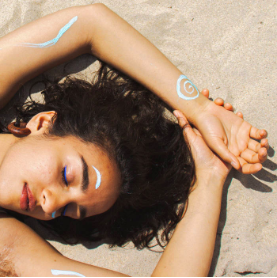 “Fill Into Me” is Anju’s most recent single. One listener described the song as having a “beautiful building up pace” Photo Courtesy of Katytarika Bartel

Anju’s production was very DIY during this period. They used GarageBand and a laptop to put together music. Soon, Anju got away from the annual music release, saying that they always felt rushed to put something out at that time, even though it was a big step in their musical journey. Moving forward with more intention, Anju noted that only in the last two years have they grown to see themself as an artist. “Only in the last year I have been honest with myself and saying out loud that I want to be an artist full time, that’s my dream, saying it into the universe. For a while, it felt like a fun side thing that gave my life a lot of dimension and meaning until maybe junior year at Wellesley.” During Anju’s junior year, they were asked to perform at a Boston bookstore that they often frequented performances at. “That was a big turning point — like, dang, I can be an artist.”

Soon after, Anju entered NPR’s Tiny Desk contest, the prize for which is a performance on NPR’s popular YouTube concert series. From this, Anju was featured on NPR’s weekly article, and this “felt like a big moment.” Most recently, Anju received a commission from the South Asian American Digital Archives to create work for a sound tour of immigrant history in Historic Philadelphia. Anju noted the importance of this accomplishment: “This has been the first time that I have been getting institutional support, so that’s exciting. Just in the last year or two, I’ve gotten flown places and put up in a hotel. Just in the last year or two, I have been identifying as and claiming myself as an artist and leaning into it and being okay with it.”

When asked how Wellesley has impacted their musical career, Anju attributed a lot of personal growth to involvement in communities and classes at Wellesley, but felt as though there weren’t a lot of music classes that focused on what they wanted to do. Anju took an electronic music class, and while there was a lot of theoretical work, the class lacked technical training. Additionally, Anju was a member of the BlueNotes A Cappella group. Despite never having never been vocally trained, they learned a lot from fellow BlueNotes and from singing with other people. “Interpersonally, Wellesley had a big role in growing as a human being, I feel like that’s where I grew into someone I’m proud of.” 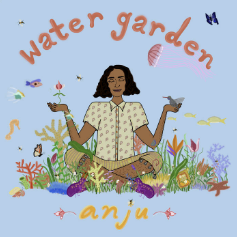 “Water Garden” is a four-song album released by Anju in 2018. One listener compared the music to “streams of nectar” Photo Courtesy of Ayqa Khan

As a musician, Anju has thought a lot about how their personal identity has affected their musical trajectory and how it continues to inform their decisions and artistic choices. Anju identifies as South Asian, queer and genderqueer. These identities contribute to how Anju walks through the world, but growing up, they didn’t see themselves represented in music or school. Anju’s class background, however, has enabled their strong musical education as a young person. “More recently, I am trying to claim identity of class privilege, and this plays a big role in who I am now. It was because of class privilege that I had private violin and piano lessons, access to recording spaces and even having access to Wellesley.” By acknowledging class privilege, Anju has carved out a musical space which addresses all of these intersections of identity.

Artistically, Anju sees themself as a very feelings-oriented and visual person. “Sensory imagery is really inspiring and important to me. I remember listening to Joni Mitchell as a kid and learning that she was a visual artist, and her lyrics are very rich. So, that inspires me and is what I am going at: using the sensory and the concrete, the everyday tangible things and to get across more swirly abstract feelings, and trying to find points of specificity in the lack of clarity. The songs that feel the best for me are feelings that are unidentifiable but strong … and me trying to like coax that out in a concrete way through a song.” This point of inspiration is prevalent in Anju’s discography. 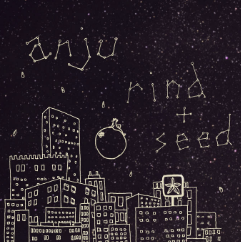 Anju released “Rind + Seed”, a four-song album, in 2017. They wrote, sung and produced the album Photo Courtesy of Lily Xie

When listening to “Jasmine” off of Anju’s 2018 release “Water Garden,” one is swept away through echoing vocals and sweet lyrics of “cherry seeds and mango pulp.” The song leaves you with a peaceful yet longing feeling for a warm summer day. This feeling is not easily translated through words, but rather through constructing a certain “swirly” sound. On this project, Anju shows their strengths as an artist and is impressively credited with lyrics, vocals, guitar, keyboard, ukulele, percussion collage and production.

Anju’s glittering musical personality is also apparent on “Cassiopeia” from their 2017 project “Rind & Seed.” “One of my friends described it as taking a jump or a plunge,” explained Anju. “The beginning of a romantic relationship and wondering what might become of it, and that initial newness and magic.” This song is also Anju’s most listened to on Spotify and has garnered over 172,500 listens. “The reason that song is so listened to is because it was added to a Spotify curated playlist called ‘No Borders,’ which features artists from the South Asian diaspora. It got into Spotify’s algorithms and it started showing up on people’s ‘Discover Weekly.’” This story exemplifies how exposure on streaming sites such as Spotify can result in increases in audience awareness of indie artists.

Along with the development of an artist identity, Anju has scaled up their production equipment. Anju was using a laptop and GarageBand for production until recently, when they updated their systems. Now, they use a Rode condenser microphone, the Logic Pro X program, a Focusrite interface, a mini keyboard and monitors. “It’s been relatively simple over the years; now that I have a monitor, I am wondering how I ever produced before,” Anju explained. By fully attaching to the idea of being a career artist, Anju has been able to dedicate time and resources to make production easier and more sophisticated.

Our interview closed with a cliché question: what advice would you give to someone who wants to pursue a career in music? “Don’t wait for anything, just do it. Sometimes it feels like one might need to wait until they have all the resources or audience or whatever they think an ‘Artist’ should look like. Push that aside and understand that there is still an artist inside of you and just use what you have.” Anju is wise beyond their years and their advice has fueled my own personal interest in being an artist. I will be looking forward to the next release of the deep, swirly, emotional and transcendent music of Anju.

You can follow Anju on www.anjutunes.com or @anjutunes on all social media. Anju on Spotify Anju on Apple Music Anju on Bandcamp Anju on SoundCloud