Too Close to Home

“Did you go to China over break?”

When Anne Jiang ’23, a Chinese-American student from Los Angeles, California, returned to campus after winter break, she was swamped with questions regarding her relationship with a country she had last visited over a year ago.

“[When] people are around me, they’ll say ‘I should probably stay away from you,’” said Jiang. “They don’t mean it, but … the fact that they think it’s funny bothers me.”

The increase in anti-Asian sentiment on campus and around the world has directly correlated with the outbreak of the coronavirus disease (COVID-19) in Wuhan, China. The virus was first detected in late 2019 and presents similar symptoms as other viral infections like the flu, such as a fever, cough or shortness of breath. To date, it is the deadliest epidemic in recent Chinese history and has resulted in the death of more than 2,000 people as of Feb. 18. Over 73,000 have been infected and as many as 780 million were affected by travel restrictions in China, including two Wellesley students who shared their experiences with The Wellesley News last week.

Students on campus, particularly those of Asian descent, have spoken out about incidents similar to those that Jiang has experienced.

Emma* recounted overhearing two students in the bathroom discussing COVID-19. One of the students asked the other whether she was worried about contracting the disease. The other student responded that she was not because only Asians could get the virus, shared Emma.

“[I just thought] it was ridiculous,” Emma said.

When Sarah*, an international student from Beijing, China — 715 miles from the outbreak’s epicenter in Wuhan — returned to campus on the first day of classes, her roommate’s parents expressed concern over their daughter living with someone who had been in China over winter break. Both of the roommate’s parents are doctors.

“I caught a cold and was coughing, so that’s probably why they were so concerned,” said Sarah. “I understand them, but it’s just that they were a bit out of [bounds].”

The same day, her roommate’s parents called Health Services and booked an appointment for her to be tested for COVID-19, which Sarah said she was already planning to do herself. Sarah emphasized that her roommate was apologetic for her parents’ actions and confronted her parents afterwards.

While all three students were impacted as a result of growing hysteria, none of them believe that these were incidents of explicit racism.

“I feel like that it’s not racism in the sense that people are actively bullying other Asian or Chinese students,” said Teresa Xiao ’23, an international student from Shanghai, China. “It’s more of this implicit racism … that you know anyone who looks Chinese or Asian could have the virus, only because they look like that.”

However, Emily Zhai ’21 emphasized the real world implications these views have.

“In comparison to other “disasters” across the world, people, particularly white people, rush to donate and create fundraising pages to help but in this dire situation, [but] I only see those of Chinese descent caring about [COVID-19],” Zhai, the vice president of the Chinese Student Association (CSA), said. “It reminds me of an unconscious, implicit social hierarchy that is accepted across our society where POC are not as prioritized as non-POC.”

Students have also experienced anti-Asian sentiments online, as social media has facilitated  the spread of insensitive jokes about the outbreak and sensationalist media. On Jan. 29, Euphy Liu ’23 posted an Instagram story asking others to be respectful of her father’s hometown of Wuhan and to avoid making jokes and memes about the coronavirus outbreak.

In response to her post, an admitted Wellesley student in the Class of 2024 wrote, “If you look at literally any disaster or news breaking event in the past 20 years people have made memes about it …  if you can’t understand a different perspective then you’re really the one being close minded and inconsiderate.”

According to Liu, the student then sent her memes making fun of various disasters, including a screenshot of the game Plague Inc. with China selected as the virus origin. 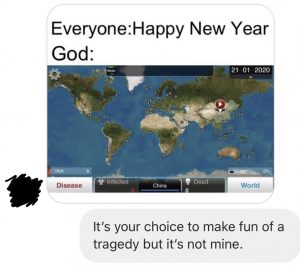 “It’s your choice to be offended by ‘racism’ when everything is memed regardless of race, but it’s my choice to not get hurt and enjoy a joke every now and then,” the student wrote in screenshots obtained by the News.

“There are definitely many forms of coping mechanisms people use to ‘lighten the mood’, but …  it is never acceptable to devalue and delegitimize the severity of the issue,” Liu said. “My family is literally suffering from this … and seeing people making fun of this is really heartbreaking.”

Jiang experienced a similar incident on social media after posting an Instagram story on Feb. 1 that expressed frustration with the hysteria that arose as a result of COVID-19. Her story featured a news article about a Chinese man who suffered a heart attack in Sydney and died as a result of bystanders being “too scared to give CPR in case he had the coronavirus.”

The respondent, who is not a Wellesley student, wrote that since the virus has its origins in Asia, “you really can’t blame [the bystanders].” The respondent went on to say that they wouldn’t have helped the man unless they were “100% sure that the person wasn’t infected.”

These incidents came shortly after a post on the Overheard at Wellesley Facebook group on Jan. 28, in which a student reported hearing fellow students say that “This school has too many Asians.”

*Names have been changed to maintain student safety

All information about the coronavirus that has been shared with Wellesley students has been communicated via email. The first email was sent by Medical Director of Health Services and Sports Medicine Dr. Jennifer Schwartz on Jan. 24, requesting that faculty and staff who had traveled in Wuhan and who presented symptoms contact Health Services immediately. Additionally, the email outlined what COVID-19 was and offered tips for students to stay healthy during flu season. Subsequent emails from Wellesley College President Paula Johnson and Schwartz in early February discussed the virus and the school’s policy in greater depth.

The first of the two emails announced that as of Jan. 29, the school had prohibited all College-related travel to China for faculty, staff and students, and requested that all those returning from China after winter break fill out an anonymous form in order for the school to monitor risk and provide individualized support. In accordance with Center for Disease Control guidelines, a 14 day self isolation was required of any US citizen who had traveled to the Hubei province in the past two weeks, effective Feb. 2. The second email confirmed that several students, staff, and faculty on campus had been in self isolation, but reported that none showed symptoms and would be free to go by the end of the week. There have been no confirmed cases of the disease within the Wellesley community.

Additionally, students are to contact Slater International House or the Office of Intercultural Education if they had “experienced mistreatment, hostile comments or bias related to concerns about the virus,” which, according to the email are, “actions that contradict the core values of the College.” In another email to The Wellesley News in early February, Dean of Students Sheila Horton stated that any sort of anti-Asian sentiment on campus would warrant an honor code violation.

“I would hope that we would have compassion and support our Asian students on campus, especially any of those who have family or friends in China or the affected areas,” Horton said.

While the school has outlined its policy regarding the health of students, many have voiced concerns over how administration has responded to the rising anti-Asian sentiment resulting from COVID-19.

“They were pretty late to respond. They said they had a plan, but it just really didn’t feel like what they had was enough,” Emma said. “There’s so much more they could have done.”

Karen Shih, the advisor to students of Asian descent, worked with Asian Student Union (ASU), CSA, Pan-Asian Council (PAC), Wellesley Asian Alliance (WAA) and Slater International center to organize a community discussion on “Building Support Following the Coronavirus Outbreak.” The event was open only to students of Asian descent, who received emails informing them of the event. The event, which was held Feb. 13, aimed to provide a space for students to voice their experiences in a supportive space. Shih said that an event open to all Wellesley College community members was being planned.

While the focus of conversation has mainly been on students of Asian descent, some feel that the conversation should have been open to the entire Wellesley community.

Jiang feels that a community discussion event that invited only students of Asian descent may not have been as effective as the planners might have intended. “We’re not the people who have problematic views in the first place. We’re the people being hurt by them. It should really be advertised as an all-school conversation rather than a students’ of Asian descent conversation.”

“Everything’s always linked back to the ethnicity of the people who are sick,” Jiang said.