As conversations about data dominate this year’s College Government (CG) elections cycle and the 2020 American presidential elections, it is clear that cold, hard facts are a priority for voters in elections at every level.

Taking inspiration from Harvard’s Open Data Project and the work they did to — inaccurately — predict the result of Harvard’s College Government elections, we sought to examine candidates’ statements of intent, which are typically where each candidate shares their goals and their platform.

Historical SOI analysis of winning CGP candidates. This year, there is only one candidate for CGP so instead of predicting outcomes, we focused on student sentiment about the issues they’d like addressed by the 2020-21 cabinet.

We hypothesized that statements of intent (SOIs) would largely be position-specific and not necessarily touch on specific campus-wide issues. However, they might reflect candidates’ overarching objectives, relevant institutions/committees/constituencies and the sentiment candidates hope to curate on campus. For instance, in line with our initial plans, an analysis of winning CGP SOIs suggests that past presidents have rightly prioritized campus community issues as they pertain to CG committees and working with administration.

We first identified top issues across all elections since 2015. Focusing on the three contested races for this year’s election: those for CG Vice President, Committee for Political and Legislative Affairs (CPLA) Chair and Student Bursar, we conducted a frequency analysis to identify key terms across all candidates’ SOIs. We discarded common words and generic, position-specific language.

The 2020 SOIs primarily focus on position-specific as opposed to campus issues, reflecting a continuation of the trend from prior elections. The 2020 CG VP SOIs deviated the most from those in historical elections. This year’s candidates emphasized student representatives while in earlier elections, CG VPs tended to focus more broadly on overseeing college committees. The deviation also reflects recent changes to the role of CG VP and the creation of new committees like the Appointed Representatives Committee (ARC).

To bridge the gap between CG-specific responsibilities and broader Wellesley discourse, we were inspired to poll students about college-wide issues. We also included issues that were not mentioned in any of the candidates’ statements, but have been fixtures of dialogue both on-campus and on social media, like student housing and dining services.

Poll recipients were also given the option to add an issue that was not included in this list. We selected a sample of the student body to poll, including 200 randomly selected members of each class year and 14 randomly selected Davis Scholars. We sent our poll out in the morning on Friday, March 6, two days after the start of the active campaigning period and six days before voting day, March 12.

We received 99 responses to the poll, 12.2 percent of the students who received it. Below is a visualization of how many students from each group responded. 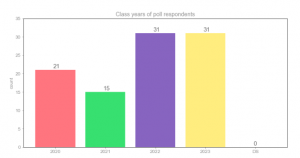 Before performing any analysis of the data we collected through our poll, it is important to note the influence of response bias in our results. People interested in the election and CG in general were more likely to fill out our poll, so these students are most likely overrepresented in our data. Additionally, the number of students who responded to our poll is only about 12 percent of last year’s CG election turnout, in which a record-breaking 51 percent of the student body voted.

The significantly higher response rates of first-years and sophomores could point to younger Wellesley students’ greater interest in the elections and College Government, a hypothesis that the first-year and sophomore-heavy Senate body seems to mirror. The low response rate of Davis Scholars could be due to several factors, one of them being that we included fewer Davis Scholars in our sample in order to represent the same portion of each class year. Another reason could be that Davis Scholars do not see themselves represented in this year’s candidate pool. The comparatively low response rate of the class of the junior class could be attributed to the high volume of juniors abroad, but this apparent lack of interest in College Government is curious given that most of the CG candidates are juniors.

It may be challenging for Wellesley to achieve record voter turnout a second year in a row. Responses to “Will you vote in the College Government elections on March 12th?” were surprisingly varied.

Our polling results indicate that even though our response bias may have impacted our data, a little more than 40 percent of the students who responded indicated that they were either not voting or they were unsure if they were voting in CG elections. Even so, the percentage of respondents who indicated that they do plan to vote in CG elections is higher than last year’s voter turnout, which might mean we could see an increase in voter turnout this year from last.

From a qualitative standpoint, there was far less community discourse surrounding elections last year compared to this year, a factor that may drive students to vote in higher numbers. Ultimately, we anticipate that voting via WEngage, a platform that most students do not use regularly, may pose a barrier for students voting on Thursday, but the surge in community discussion around this year’s candidates may soften the new platform’s impact on turnout. 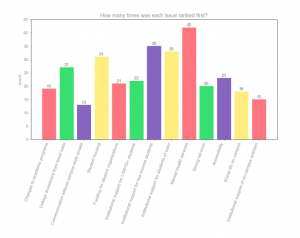 To compare poll respondents’ rankings of each of the issues, we calculated the inverse of each rating, replacing its rank value of n with its inverse value of 1/n. This conversion works to assign the least amount of points to issues ranked 13th, and the most points to issues ranked first. After summing these point calculations, we were intrigued to see a fairly small gap between the issue with the most points (“Mental health services”) and the issue with the fewest points (“Communication without campus-wide emails”).

The results are unsurprising given the frequency and urgency in discussions surrounding mental health resources on campus. Increasing the availability and accessibility of mental health resources was championed by the student group Wellesley for Accessible and Adequate Resources (WAAR) in the spring of 2019, and many changes were made, but mental health services still remains students’ biggest concern by a significant margin.

“Communication without campus-wide emails” appears as the lowest-ranked issue with only 31.7 points. This position could have been impacted by the high number of first-years who responded –– as students who only experienced one semester of campus-wide emails, they may be less concerned with the end of the practice. Another possibility is that this discourse has been overrepresented in conversations around campus because of the newness of the policy, but ultimately students place more importance on long-term systematic issues, like institutional support for low-income students and students of color.

The stratification between issues is more apparent in this visualization, which indicates how many times respondents ranked an issue as the most important issue to them. Due to restrictions on Google Forms, we were unable to enforce a requirement that respondents select a different rank for each issue. While some respondents naturally responded to our poll with a different ranking for each issue, many respondents picked several number-one issues. However, apart from these long standing issues, since our poll, recent discourse spurred by Student Bursar write-in candidate Miranda Miao ’21 regarding SOFC funding might also have reinvigorated interest in campus and org financing. These trends once again highlight students’ prioritization of mental health services, support for low-income students, support for students of color and student housing.

This year, no candidate for College Government specifically mentioned mental health in a statement of intent. Recent candidates who have addressed mental health in their statements include Kristen Gasparini ’20, a presidential candidate in 2019, and Maya Nandakumar, Chief Justice for the 2018-19 school year. Despite the abundance of dialogue surrounding mental health resources for Wellesley students, conversations about it appear to be missing from our elections. Candidates’ statements of intent, as our analysis demonstrates, largely lack mentions of issues beyond those that are position-specific. This trend could indicate these candidates’ awareness of the limitations of College Government, but another factor could be a disconnect between students and their representatives. While appealing to pressing campus issues might attract more general attention and support for the candidates, many of these responsibilities extend beyond the role of College Government and require administrative action.

Ultimately, our analysis proves that it’s important for student voters to engage with the candidates at the debates about issues that matter to them, like mental health services. It’s also equally important for candidates to clarify their positions on topics beyond their anticipated duties and connect their roles to the issues that matter most to their would-be constituents. We may see on Thursday that the most successful candidates have not only proven their ability to fulfill the duties of their intended role, but also engaged with voters on wider campus discourse