Last June, Biological Sciences professors Vanja Klepac-Ceraj and Julie Roden began wondering about how to design the first-ever remote version of their Microbiology with Laboratory (BISC 209) course for Term 2. By the time class started in October, they had worked with prep staff to mail their students lab kits that contained antibiotic discs, an agar stab with live microorganisms, soil samples from Wellesley’s Global Flora greenhouse on campus, a packet of uncooked pasta and beans, agar plates and sterile tools including pipettes and spreaders. 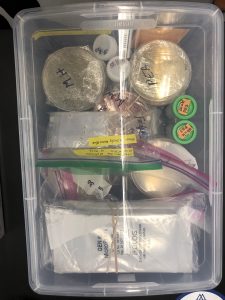 For Klepac-Ceraj, who taught both the lecture and lab components of the course, having a hands-on element for students was at the forefront of her mind. Referencing purely online lab activities that provide students with pre-collected datasets, she said “I didn’t feel it was right to give [students] spreadsheets — it would get more analysis done, but this is a lot more fun, and I think they’re also important concepts to learn.”

For Ayusha Ariana ’22, who took Microbiology with Laboratory with Klepac-Ceraj and Roden, the lab kit was a warm welcome.

“I think it was definitely a reprieve from staring at my Zoom screen blankly like a fish,” Ariana said. “If I didn’t have to do anything with my hands, I would not have been able to concentrate as much.”

Before designing the lab kits, Klepac-Ceraj and Roden first began planning for safety precautions in the modified course. According to Klepac-Ceraj, the two contacted Deans Megan Núñez and Ann Velenchik to explain their plans and work with the College’s General Counsel Karen Petrulakis, Environmental Health and Safety Director Suzanne Howard, Science Center Director Cathy Summa and the Risk Management office to discuss the safety of the lab kit materials and determined that the College would be held liable for potential mishaps.

Klepac-Ceraj and Roden then revised the standard biology lab course safety protocol and included a remote lab waiver for students to sign, ensuring that students would only work in front of instructors over Zoom classes, where they could demonstrate the safest techniques.

“We had to make a kit that would be safer than what we usually do in a lab in-person, so we had to say, ‘Okay, we know that this is safe to do and that the students cannot harm themselves,’” Klepac-Ceraj said. According to Klepac-Ceraj, all live microorganisms sent to students were considered safe species to work with.

Mila Matney ’24 also received a lab kit, though hers contained mineral samples, rock samples, Play-Doh, Silly Putty, nails and glass for her geoscience course Earth Processes and the Environment with Laboratory (GEOS 101) in Term 2. According to Matney, the Play-Doh and Silly Putty were used to model examples of layered rock formations and tectonic boundaries, while the nails and glass were used to test hardness of the rock and mineral samples.

Matney found that the materials in her geoscience lab kit contributed to her learning, calling them “really effective.”

“The Play-Doh and Silly Putty were helpful in demonstrating the concepts,” she said. “I feel like I got the skills that you’re supposed to have in an intro GEOS class, like learning how to identify rocks based on hardness and color. That seems like it really got across the skills that you would have had like an in person lab. Maybe not as well, but it felt like it was just fine.”

“If I didn’t receive those materials, I would have felt like, ‘What’s the point of taking this lab class?’ because I feel like a lot of it is just interacting and seeing for yourself the microbes in different settings,” Ariana said.

“It’s easy to pack too much into labs,” Klepac-Ceraj said. “Knowing that we had to take things slowly because students are working at home on their own, we had to really think about what’s essential.”

Kraffmiller noted that a limitation of the online term system included working with fellow classmates on her physics lab activities. After completing an assignment to build a ping-pong ball launcher, she wondered whether the experience would have been different if the course had been on-campus.

“Maybe we would be working in groups if we were in person, which obviously is very different to just having to go at it yourself,” Kraffmiller said. “You would also be around all the other people who are in your section of the lab, so you could at least see what they were working on, or see what worked for them, whereas us just by ourselves at home, we sort of had to troubleshoot on our own.”

To help her brainstorm for the assignment, Kraffmiller called a friend who was also taking the class to discuss their designs for the launcher.

Ariana also found the lack of a dedicated in-person meeting space to be challenging when she noticed that her agar plates with growing bacteria had introduced an odor in her room. 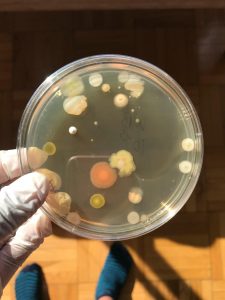 “Some of them smelled bad,” Ariana said. “I opened the Ziploc bag, and I was hit by a really fishy, nasty smell, and I was like, ‘Did something go wrong?’”

Kraffmiller concluded that she would rate her remote lab experience as ‘leaning slightly positive,’ saying, “I do think that there are benefits to doing labs in person that you really can’t get remotely. But it seems to have gone smoothly for all of the restrictions that being remote gives you.”