Houghton Chapel did not host Flower Sunday or any of its other traditions this year, but students gather there weekdays for Russian, mathematics and chemistry, among other classes. The chapel is one of a few untraditional spaces on campus that has been converted into a classroom to fit COVID guidelines, with the Alumnae Hall ballroom being the other. Although these locations allow for safe in-person meetings, a rarity during the pandemic, they come with a host of logistical issues of their own.

Amy Zhang ’24 is taking an English-language course on Tolstoy in the Russian department this term that meets in the chapel four times a week. Although Zhang enjoys the subject and the lectures, the chapel’s acoustics cause audio difficulties. Wellesley has provided students with transceivers to speak into, and the professors wear microphones, but this is not a foolproof solution.

“There’s that high-pitched noise that sometimes happens when you’re using the microphone and a weird fuzzy sound,” Zhang said, adding that the mask wearing was another barrier to learning. “In normal times you also rely a lot on lip reading … but now you can’t see what they’re saying, so it’s all audio.”

Zhang estimates that in every class, at least a third or fourth of the students have trouble hearing or seeing everything. However, she cannot think of any solutions that would be COVID-friendly.

Jiahui Zhang ’23 took a computer science class in the Alumnae Hall ballroom last semester, as well as an in-person poetry class that met in a typical classroom in Founders Hall. Though she preferred the latter, she believes this was more due to the format of the class than its location.

“[The poetry class] just felt like a normal class … mostly because it wasn’t lectures … so it was really easy early on to feel connected to my classmates,” Jiahui Zhang said.

On the other hand, the ballroom was large, impersonal and created more barriers between students and the professor — although this is somewhat normal for a lecture course, Jiahui Zhang added.

“It was definitely hard to have an engaged classroom just because everyone was so far apart,” Jiahui Zhang said. “There definitely wasn’t a big sense of community or approachability to talk to the professor, and I don’t think that was on him at all … We literally had a physical barrier between us.”

On Oct. 9, the professor decided to make the class remote until the end of the term after a student’s blockmate tested positive for COVID. Despite technical difficulties with the standing projector and other obstacles the ballroom presented, Jiahui Zhang preferred the in-person format because it was easier to concentrate.

“It definitely helped that there was at least some slightly social aspect where you could walk to somewhere and feel like there was a physical purpose behind what you were doing,” Jiahui Zhang said.

On the other hand, Ellie Frato-Sweeney ’24, who was in the same computer science class, surprisingly found the format better after going remote in the spring. While the physically-distanced ballroom impeded natural communication, this is less of an issue online.

“If you’d asked me last semester, I probably would’ve said, ‘No, go in person,’” Frato-Sweeney said. “I thought I would not be able to make connections over Zoom, but I’m realizing especially through breakout rooms … you can actually have conversations like normal, so it’s kind of a good trade-off.”

As for solutions to the logistical issues converted classrooms create, Jiahui Zhang proposes that professors could hold more frequent office hours and, when weather permits, take classes outside. Her poetry class did the latter and even incorporated Wellesley’s natural environment into the lesson plans.

Professor Smitha Radhakrishnan, who is teaching a sociology seminar in the chapel this term after teaching remotely last semester, has tried many fixes to the acoustic problems in the classroom.

“We try to go outside if the weather is nice,” Radhakrishnan said. “Also, there’s enough desks in there that I can send students to the edge of the room where they’re still socially distanced … in groups far away from each other, and they can have conversations that way.”

Even though the third term is almost over, Radhakrishnan is still trying to think of new ways to combat the sound issues in the chapel, as well as the general awkwardness of physically distanced conversations.

“Seminars are so much about spontaneous interaction,” Radhakrishnan said. “I’m also not used to lecturing with everyone facing me … We’re in a circle usually.”

After teaching remotely, the setup in the chapel required difficult adjustments in addition to those she already made to the class due to the term system and the mental demands of the pandemic.

“You would think, ‘Oh, you’re going back to in-person, you ought to know how to do this, you’ve done this for all the years you’ve been at the college, no problem,’” she said. “But no, once I got there and saw that it was socially distanced and what that actually looked like … it almost felt like I had to learn … a third thing.” 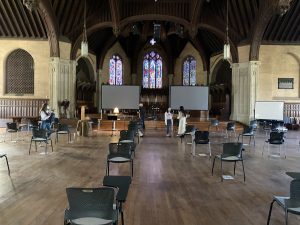 The inside of the Houghton chapel. Photo courtesy of Tekla Carlén.

Despite these issues, Radhakrishnan and Amy Zhang both acknowledged upsides of the space. Particularly, Amy Zhang admired the beauty and aesthetics of the chapel, which tie into the religious themes of her course.

“With something like Tolstoy and how they talk about all these religious concepts, you can look up and see the chapel, and I feel like it really adds an effect to the class,” Amy Zhang said.

Amy Zhang agreed with Jiahui Zhang that sound issues were worth the added motivation and engagement of taking an in-person class. Radhakrishnan has noticed the same attitude in her students.

“I don’t feel like the students are missing out on what I had hoped for them to accomplish in the class,” Radhakrishnan said. “Even though I’m very concerned that, you know, ‘What if you can’t hear that comment?’ … ‘Are we really bonding as a community?’

Students are just so happy to be in person, I think, even if … there are these kinds of challenges.”

The College has announced its intention to return to completely in-person instruction with all students on campus next semester, depending on the status of vaccinations, but it remains to be seen whether classes will still require masks and physical distancing.