Addicen Bauer ’24 and Haysie Chung ’24 never anticipated living in Athens, Greece. In early April, students enrolled in Term 4 study abroad programs made their way to different areas of the globe. Like Bauer and Chung, many participants neither planned to study abroad this year, nor did they expect to study in their current locations.

The College first introduced the Term 4 study abroad programs back in the fall of 2020, adapting semester-long study abroads to the nature of the term system. The two-month long programs are open to all, but are intended for first-years and sophomores studying remotely in their second semester. At first, the College boasted 13 different options, from Bordeaux, France to Osaka, Japan.  As the year progressed, several countries adjusted their Covid-19 regulations to limit visitors. Now, only five programs remain — three with in-person classes and two hybrid locations. 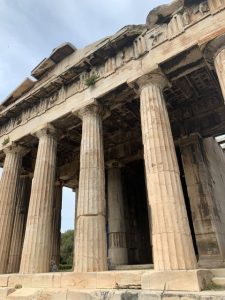 Bauer initially planned to study in Copenhagen, Denmark, a program popular for its location and its all-English classes. Chung, who had studied Italian first semester, was enrolled in the Bologna, Italy program. About two weeks before the students were scheduled to leave, they received an email informing them that their programs had been cancelled. Luckily, both managed to enroll in remaining spots for Athens, Greece.

After finishing their week-long quarantine, students in Athens started exploring surrounding parks, markets, participating in field studies and attending their in-person classes. This was a welcomed adjustment for those exhausted from the Zoom classes of previous terms.

“A lot of our classes are contextualized in the city itself,” explained Bauer, whose art class is visiting historical sites in Athens.

Students in Amman, Jordan are also exploring the rich history of the capital city. Only five students are enrolled in this program. The participants have all studied Arabic for at least one semester at Wellesley, and many for much longer. All have agreed to fully immerse themselves in the language during their stay and are expected to exclusively speak Arabic outside of class.

Unlike many in other locations, Alexandra Brooks ’23 did not need to switch programs last minute. However, Brooks felt very unsure whether COVID-19 regulations actually permitted students to study abroad in Jordan.

“I was nervous about it until I touched ground in Amman,” Brooks said. “In March, we got a tentative yes. I still had to plan what Term 4 classes I would take at Wellesley.”

Restrictions have been fairly strict for the first month of the program, with policies like a 7 p.m. curfew. But things are looking more hopeful, explained Brooks, who expects regulations to loosen as case numbers continue to drop. So far, students have enjoyed exploring the city and look forward to day trips in other parts of the country.

Gracie Evans ’24 and Suzanna Schofield ’24 are currently studying in Bath, England, although neither originally intended to do so. Evans, who had studied French in the previous semester, first applied for Bordeaux, France. Schofield originally had Copenhagen in mind. When the College cancelled both programs on short notice, the two had only a few days to decide between heading to Bath or staying home.

“I was in class when I got the message and I had to decide within a few hours,” said Shofield. “It was a lot at once, but I’m happy that I’m in Bath.”

Both are grateful for ultimately deciding on England. Now, Evans is studying the history of Vikings and taking another course on documentaries. Like many others, she is eager for renewed freedom found outside of Wellesley’s on-campus COVID regulations. Able to secure a vaccination just before departing, Evans can visit the Stonehenge and go on day trips to London with a greater sense of security. Schofield also expressed relief at being fully vaccinated. As an environmental science major, she is eager to discover the surrounding nature. She hopes to explore the Jurassic Coast, a world heritage site alongside the English Channel, and visit the nearby national park.

Although many of the Term 4 study abroad programs faced unforeseen changes, students do not seem to regret traveling. If COVID-19 rates in each location remain manageable, the students will be able to continue exploring and studying in their unique programs.