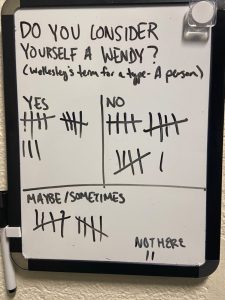 In high school, I had a raging moral superiority complex. I had managed to conflate partying, hooking up and drinking/smoking with being unsuccessful. I truly believed that because I didn’t engage in what I had internalized as “sins,” I would see higher levels of academic achievement in my life, especially compared to my female peers. Spoiler alert: most people who partied ended up doing just as well, if not better, than me. While there isn’t much I would have done differently, I wish I could go back in time to pull out the stick that was shoved up my backside.

No, this article is not going to be me placing myself in the shoes of the protagonists from the movie “Booksmart.”

I only moved to Wellesley in the second term of the Fall 2020 semester. My parents had still been quite worried about COVID-19, and a 22-hour plane ride from India with an N-95 mask on had sounded less than ideal. In the end, I ended up changing my mind midway through the first half of Term 1 with the miserable time zone difference, realizing I absolutely needed to experience some part of college in person.

I had cultivated a small group of friends online through enthusiastic Instagram hype-ups in comment sections and Snapchat group chats filled with excited exclamations of what was to come. While most of the connections were superficial, we were genuinely excited to meet up with each other. And it was the idea of meeting this amorphous blob of people from different parts of the world that kept me from feeling lonely when I was still studying remotely.

Two weeks before I got on campus, I started realizing something was off with their interactions with me. Recognizing the familiar spiral of overthinking friendships, I texted a friend of mine about what was possibly happening.

It turned out that I had been right: my friends had decided they weren’t particularly fond of me anymore. And while this was gut-wrenching as a revelation, it wasn’t what stuck out to me the most.

In her explanation to me, she wrote, “I was gonna tell you this before, but I forgot: I think people here get the feeling that you are going to be another ‘Wendy’ (pls lmk if you don’t know what that is). I don’t mean to hurt your feelings in any way, I’m just telling you the truth.”

I responded, “Wendy is the super ambitious one, right?”

“I think so. And I think people are quite intimidated.”

This blew my mind. Then it was followed up with this statement that I proceeded to think about for a long time.

“The point is, Alekhya, I’m warning you — if you want ppl to like you here you haveee to be at their level.”

Granted, there was a bit more to the general demise of my friendship with them that had nothing to do with my “Wendy” tendencies. But this interaction in particular made me wonder whether this would ever happen to a man. If a guy was ambitious, competitive and driven, would there be a caricature of him that was vilified? Would he be told that he should “be at the same level” as everyone else in order to make sure he wasn’t intimidating them? In order to keep his friends?

I then decided to look into the Wendy and Wanda archetypes a little more. It became increasingly obvious that there was an implicit correlation with Wendys and being “uptight” and Wandas and being “slackers.” It reminded me of my backwards notion in high school where I had come to the conclusion that people — specifically the girls in my grade — who partied weren’t smart or capable of success. Once again, there exists that double standard. If a man were to party while attending a notable institution, he would be seen as a “fun guy.” Someone who had managed to balance out his academic and social life. Someone who could have a good time. He would never be chalked up to being dumb for engaging in party life.

To tackle this, especially as students at a historically women’s college, it’s important to actively acknowledge certain terminologies we use for describing our siblings. I have struggled with separating my perception of how people “should” act by traditional societal norms and being self-aware that the labels I grew up learning were toxic and untrue. In the past, I found myself thinking quieter, driven, ambitious women were “unfriendly.” That women who were outspoken and confident were combative. That women who were nice and friendly were either fake or trying too hard. That women who partied a lot were airheads.

In fall, I had a conversation with Kari Gottfried ’23 about a post she made. It was a random sentiment they had shared about social media activism (a discussion too nuanced for me to summarize here) that I disagreed with. As my chunks of gray text dominated the Instagram DM screen, I immediately got embarrassed. “I’m so sorry,” I wrote. “I sound super aggressive right now. I just like a good debate.”

In response to the last statement, she replied with a simple, “Never apologize for that. You’re not being aggressive. You’re being assertive.”

That conversation has since reverberated through my brain — such a simple sentiment, yet something that held so much meaning. I appreciated her willingness to uplift me, even though I disagreed with them. Why did I immediately think I was being aggressive for stating my opinion?

Shifting the narrative from the immediate demonization of people affected by the patriarchy for behaving a certain way is imperative in uplifting them. Moreover, it is important so we can help ourselves, too. We must unlearn these archaic notions we have taken with us in order to see the world through a fundamentally patriarchal lens. And by unlearning these notions, we can stand prouder, taller and more confident, having shed our self-imposed male gaze.

So who cares what kind of “Wellesley student” you are? Whether you’re a “Wendy” or a “Wanda,” you are a kick-ass, wonderful, multifaceted individual.