On Oct. 14, posters titled “The Future is Anti-Abortion” began to appear around campus advertising a guest speaker named Kristan Hawkins. Sponsored by the student organization Wellesley for Life (WFL), the event is slated to take place on Oct. 21. Student backlash was immediate — Twitter threads, Instagram stories and Facebook posts discussed the speaker’s attitudes towards abortion and transgender people, as well as a variety of methods to protest the event.

As part of her initial response, student Maddie Paoletti ’22 created a document that compiled student concerns about bringing Hawkins to campus, including the assertation that her transphobic and ableist viewpoints constituted a breach of the College’s official non-discrimination policy. Among other things, the document included an email template to send to Director of Student Activities Jessica Grady, created by Tazrean Hossain ’24. This eventually became the planning document for a protest that was slated to occur during the event.

While the Google document was initially open to all members of the public, it was locked on Oct. 20 when Hawkins shared it in a public statement from her affiliated organization, Students for Life of America. Among other things, the statement said that “preparations are being made to address any violence instigated by protestors during the event.” The statement prompted protest organizers to add a silent vigil, which is scheduled to take place at 6 p.m. in front of Clapp Library, in honor of those who died due to unsafe abortions. 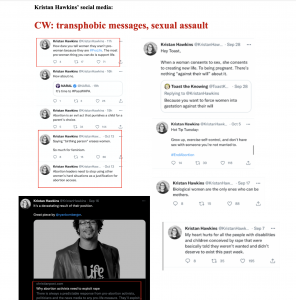 A screenshot of the Wellesley for Life protest document.

The document also included calls for the deconstitution of WFL, tangible support for transgender students and survivors of sexual assault, greater allotment of funding for Health Services and increased tansparency from both the administration and the Office of Intercultural Education (OICE). At the time of writing, the document had over eight hundred signatures, including from alumni, parents and students attending other universities.

Mackenzie Weatherly ’22, who worked on creating the document and organizing the protest with Paoletti, expressed her frustration that the burden of addressing the harm created by the speaker was falling on students. She said the sexual health educators (SHEs), which Weatherly is a part of, had been working to provide some of these resources, but have struggled to address some of the more institutional issues.

“We try to fill in the gaps when we can, but it’s really hard to fill gaps when the gaps are chasms,” Weatherly said.

Students were also quick to point out the ways in which reproductive healthcare, or lack thereof, disproportionately impacts marginalized communities. Harper Elrod ’25 noted the particular threat that the pro-life movement poses to people of color, especially Black women, who are almost four times more likely to die from a pregnancy related issue than their white counterparts. Elrod also touched upon the anti-abortion movements’ eugenic origins as a method of ensuring a continued white majority in America.

“It costs Kristan Hawkins nothing to let people have abortions,” they said. “It costs her nothing but a rich white majority in this country.”

Some students responded to the announcement of Hawkins’ lecture by questioning the ability of Wellesley for Life to use club funds to pay this speaker. According to Student Bursar Maya Bradbury ’22, the Student Organization Funding Committee (SOFC) may not prevent WFL from using these funds for particular speakers. Additionally, at the Oct. 18 senate meeting, College Government President (CGP) Giselle Mota ’22 said that the speaker is not being paid for by WFL.

“SOFC cannot entirely deny funding to a recognized organization on a ‘moral’ type reasoning, and can only cut funding if the use of funds applied for breaks policy,” Bradbury wrote in a Facebook comment. “Additionally, funding is strongly driven by a dollar per student formula that means the more people/interest an org has, the more funding they receive.”

In response to campus-wide reactions, WFL sent a statement to College Government (CG), which was read aloud by the CGP during the Oct. 18 senate meeting. WFL presidents Lizzie Um ’23 and Faodice Bishaze ’23 declined to be interviewed for this article; however, they sent the same statement to The News.

The following day, President Paula Johnson sent a school-wide email addressing concerns about Hawkins. President Johnson shared that, although she does not personally agree with Hawkins’ views, the College would not be canceling the event. 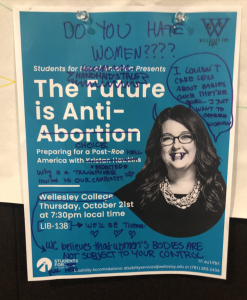 “At Wellesley, we believe that freedom of expression is fundamental to our educational mission,” she wrote. “It is one of the foundations of our democracy, and it is central to our values as a liberal arts college.”

Although the right to freedom of expression formed the primary basis for President Johnson’s explanation of the administration’s inaction, many students feel this argument fails to portray an accurate representation of the issue. For Sophia Meier ’22, president of Wellesley for Reproductive Justice, inviting Hawkins goes beyond just hurtful speech, but is a “hateful act.”

“I don’t understand why the administration approved this particular speaker,” Meier said. “A simple Google search would tell you she is not a safe person to have on this campus and would really cause mention harm to a lot of our sibs and our physical health as well.”