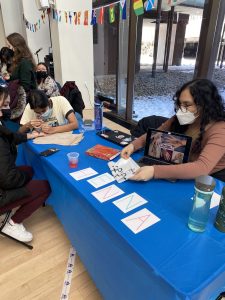 Slater International Student Organization put on their annual Winter Festival on Sunday, Feb. 27 in Tishman. Students played games, ate snacks and made crafts at booths hosted by Slater and various cultural organizations. In addition, the Winter Festival featured performances by Yanvalou, Aiko and Shotokan Karate Club. The festival is Slater’s largest event of the Spring semester; the Culture Show is the largest for the Fall.

“The goal is to collaborate with other cultural orgs and host an event where people can get to know Slater and other international cultures,” Angela Qian ’22, Slater’s vice president, said.

This was Slater’s first time hosting the event, which was once called the Spring Festival, since 2019, due to pandemic complications.

“There was a lot of institutional memory that was lost because Angela and I were the only ones who had actually done Spring Festival, which was our first year,” Sophie Wilson ’22, Slater’s president, said.

This year, Wilson and Qian, along with Culture Show chairs Manasvi Khanna ’23 and Rhea Murdeshwar ’23, led the event’s planning. The Winter Festival was similar to previous years because of loosened restrictions involving to-go food and indoor capacity limits. However, there were fewer booths than before. This year’s booths were run by Wellesley Association for South Asian Cultures, who did henna; Bangladeshi Students Association (BSA), who also did henna; Mezcla, who sold Latinx snacks; Asian Student Union (ASU), who ran yo-yo tsuri, a Japanese water balloon game; Slater, who gave out snacks and sold merchandise; and Kathie Wang ’25, who led Chinese calligraphy.

“I was doing henna for people, and I really enjoyed it because I enjoy the artistic part of my culture, and it was really interesting to share that,” Lamees Rahman ’24, co-publicity chair of BSA, said.

Wilson and Qian agreed that the event was a success, especially after a two-year hiatus.

“I really liked how all three performances had drums,” Qian said. “When you’re in the Tishman room, you can really feel the vibrations well, so it feels like you’re part of the performance.”

Wilson was most excited about the international snacks at the event.

“[Saturday] morning … Angela and I spent four hours in a Zipcar going to different grocery stores around the Boston area to find … snacks from different regions,” she said. “I [was] really excited to try some of the snacks that I bought.”

Qian encouraged students to attend other Slater events in the future.

“If anyone else wants to reach out to Slater, we have events throughout the year,” Qian said. “This Saturday, [Amélie Washington ’25, Slater’s Europe representative,] is doing a baking plus movie-watching thing in Slater. We have regional events and an alumnae panel coming up.”