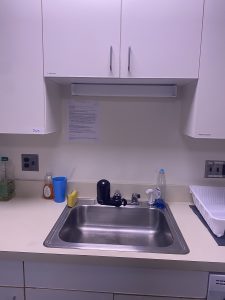 The sign above the kitchen sink is one of two places in Simpson West that warn residents about lead levels. The other sign is located in the bathroom.

Nhi Dang DS ’22 first learned that the water in her dorm, Simpson West, was contaminated with lead through an email sent to the entire student body by Piper Orton, vice president for finance and administration and treasurer, on Dec. 17, 2021. The email read, “We wanted to share with you that a recent result from a routine test indicated that three locations out of the 26 tested had elevated levels of lead. These locations were in the Distribution Center, Simpson Hall first floor all gender bathroom, and McAfee Hall first floor men’s room.” It went on to acknowledge that the previous year’s round of testing had found elevated lead levels in two different locations on campus, which administration potentially attributed to lower population density due to the pandemic.

The email also stated, “We have posted notices and information about the elevated levels of lead and what individuals should do to reduce potential exposure in the three affected locations, and we have posted findings in all of the areas tested. We will place additional signage by sinks where we found elevated levels to help educate our community about easy and effective actions we can each take.” However, Simpson West residents said they did not see signs about the lead in their living spaces until Feb. 11, 2022. By then, students had already started to move out, mainly due to concerns about the lead and safety. There still has not been additional signage as of this writing.

“The funny thing is that when we read [the sign], it says [the lead] is above the action level. And I was just like, ‘So what actions are you doing here? Like, there’s no actions being done here,’” Dang said.

Lead action level is the level of lead present in drinking water at which action should be taken. According to the Environmental Protection Agency, it “is a measure of the effectiveness of the corrosion control treatment in water systems. The action level is not a standard for establishing a safe level of lead in a home.” The EPA also states that lead is dangerous over time even at lower levels, and exposure through drinking water can cause “cardiovascular effects,” “decreased kidney function” and “reproductive problems” in adults. According to the signs, the Simpson West lead levels reported in December are 0.0443 milligrams per liter. The lead action level for lead in drinking water is 0.015 milligrams per liter, making Simpson West lead levels nearly three times over the action level.

Simpson West is located on the bottom floor of the Simpson building, which is better known as the location of Health Services. According to residents, it was originally used for offices and was then repurposed as a dorm. The hall has only eight rooms and was originally reserved for Davis Scholar housing along with Cedar Lodge. Last year it was unoccupied, as Davis Scholars living on campus lived in other residential buildings, namely the Shafer basement. This year, due to a shortage of medical singles, some non-Davis Scholar students requiring medical singles were placed in Simpson West.

“I have a medical single on campus, but I also got put on the housing waitlist … I didn’t know where I was going to live up until like a week before school started,” Gillian Sjöblom ’23 said. “Then they told me I was living in Simpson West. I’d never heard of it.”

Nevertheless, this year’s Simpson West residents quickly created a strong community. When they received the email about lead levels, they were concerned and worked together to find out more. They were initially unsure whether the “first floor all gender bathroom” referred to in the email was their bathroom, since there is another side of Simpson West that is not accessible to students. Since the administration did not reach out to Simpson West residents about the lead apart from the all-school email, the residents still feel unclear about the scope of the problem. They believe that if their bathroom were not the problem, administration would have reassured them of this, but no one did.

“Someone immediately emailed [Community Director Don Leach] … I forwarded it to Susan Cohen, our dean, just so she knew what was going on,” Ewing said. “We just never got a response from Don.”

At the start of the spring semester, Simpson West residents continued reaching out to administration and learned that their community director was now Rhonna Bollig and not Leach, as compared to last semester. Residents were not informed of the change. Submitting maintenance requests and contacting administration had always been tricky for Simpson West because they have not had a residential assistant for the past few years, and part or all of Simpson West sometimes did not show up in the system for submitting maintenance requests. Residents wanted the administration to install a water filter in the hall to protect residents from the lead, since the previous filter had run out. These efforts were unsuccessful, so Ewing used her own money to buy a $41.99 filter certified to reduce lead. The administration eventually reimbursed her.

“I’ve spoken to res life about [the lead], I’ve spoken to my dean about it, I’ve spoken to facilities about it, I spoke to environmental health and safety about it,” Ewing said. “And the common response is, ‘Well, the science is sort of out on whether lead in the water is bad for you. I don’t think you should be worried about showering.’ And then we never hear from them again. I’ve gotten so many people who have been like, ‘I’ll get back to you,’ and then they never get back to you.”

Ewing described her communications with administration as making her feel “gaslit.”

“They seem to think that we’re hysterical,” she said. “Evidently Rhonna’s response to Susan was ‘the water is very safe,’ which has never been communicated to us because I think they know that they can’t say that.”

Over the academic year, Ewing’s psoriasis — a skin condition causing dry, itchy patches — has worsened, and other scaly patches have shown up on her body. She also began grinding her teeth more in her sleep. She wonders whether the lead could be the cause, as well as the stress that the lead issue has created. Others experienced chronic migraines. Apart from the shower, Ewing is also concerned about the water used in the dishwasher and the washing machine. Although lead cannot be absorbed through skin, there are concerns about accidentally ingesting water that contains lead. Ewing has not been tested for lead poisoning, and neither has Dang.

“I’m like, ‘Am I washing the dishes in lead?’” she said. “But it’s more economically friendly to be using the dishwasher … I try not to think about it … I would just like to not have to shower in it. And they’re not even really trying that.”

After Bollig became the CD of Simpson West this semester, Ewing said she scheduled an all-hall with the residents.

“She brought up like every single thing that has ever been wrong with the dorm, let us talk for an hour and 40 minutes about it, and then when everyone was getting really frustrated, was like, ‘Well, I can offer to move you out,’” Ewing said.

According to Ewing, Bollig gave residents until the end of the week to decide whether they wanted to move — one day, since the all-hall occurred on a Thursday. Ewing and Dang both chose to stay because as seniors, they only had three months left of school, and moving would be a big time commitment.

“It’s hard for me to live with 100 traditional students, and I love the community that we used to have here … I don’t think that moving out is an option for us,” Dang said.

Dang, an education major, is currently student teaching and spends a lot of time off-campus, and she has also been going through the graduate school application process and studying for the US citizenship test. Aside from not having time to move to a new dorm, the experience learning about the lead and dealing with it has affected her mental health. Ewing expressed similar sentiments.

“I want to be able to stay and get some of the things that I was supposed to get from living here and not just be told, ‘Well, if you stay here, things aren’t going to change for you,’ which was the result of that meeting,” Ewing said.

All other residents, besides another senior who is a traditional student, elected to move out.

“[Rhonna] showed up and just told us, ‘We see all these problems, and we’re not going to do anything to fix them because it just doesn’t seem fiscally worth it,” Sjöblom said. “She kept emphasizing ‘it’s not my job’ … We were like, ‘You’re our CD, it kind of is your job to take care of us.’ Because we also didn’t have an RA … She pulled me aside after the meeting and was like, ‘I have a double in Tower that I can approve as a single if you want it,’ and I was like, ‘Yeah, I guess I’ll take that.’”

Sjöblom had previously told Bollig one-on-one that she would be interested in moving to Tower Court if the opportunity arose. Other residents who moved out of Simpson West went to Shafer, Munger and Stone Davis.

Two months later, Dang and Ewing have not seen any further action taken about the lead. During the all-hall on Feb. 10, Bollig told residents she would arrange a meeting for them with Suzanne Howard, director of environmental health and safety, but residents have received no further communication on the matter since. Bollig initially declined to be interviewed for the article and did not respond to follow-up requests.

Howard shared over email that — apart from the all-school email in December and “more detailed information” sent to Simpson West residents in December — “as an additional precaution, the College has installed a lead filter in the Simpson West kitchen. The College has also installed many water bottle fillers with lead filters across campus. Students living in Simpson West who expressed concerns were offered space in other buildings. We have posted signage and provided information to the remaining Simpson residents about the easy and effective actions they can take to reduce potential exposure, including using lead-filtered water or allowing the faucet to run for a few minutes before using it for drinking or cooking, consistent with the recommendations in these resources from the EPA, the CDC and the Massachusetts Water Resources Authority.”

Ewing and Dang denied having received the “more detailed information” in December.

The Office of Media Relations had no further statement.