It’s that time of year, when Jewett and Pendleton West are covered in senior theses and projects. This year’s senior show is “Be/longing,” which is on display from May 6 through the 27. 22 seniors’ works all based on the theme of social connection are scattered about. They range from discussing their personal social connections, such as with family or friends, or broader social connections from the Wellesley Campus to the shared experiences that all people have.

Just as the works’ connections to the theme vary, so do the mediums used. Some of my favorites are the photo installations. Hannah Dong’s ’22 “Fragmented Realities” is located in the Jewett Art Gallery and consists of eight archival inkjet prints on a plastic surface. They’re all on small stands so that they are upright to the viewer and have the subject face outward from two  pedestals. Each one is distorted, with the images sometimes being out of focus or having been printed so the ink would pool or bubble up. Dong uses the distortion to explore self-identity and how one navigates reflections and presentations of the self and others. Often the eyes of the subject would be scratched, replaced by pooled ink, or blotted out entirely, alluding to the warped perception one may develop of themself by looking at through the world’s lens.

Not every print has a person on it though — some have hands. These hands are extended upward in varied degrees of being opened. The background of the hand prints are blue, seeming as though they were hands reaching up towards the sky. In one of the hand prints it isn’t reaching towards anything, but rather holding a rose that acts as an extension of the arm. The varying state of open or closed might read as the resistance one puts forth against the limitations society has, or the pursuit of freedom beyond these limitations.

Out in the Jewett Hallway Gallery is Maxx Aguilar’s ’22 “Nicotiana,” which is an acrylic painting on gessoed tempered masonite. They depicted two Black people watching a plant bud. The bud is in front of both of the people’s faces, casting luminescence onto them. There’s unity between the colors of the bud and plant and the people which visually represents the spiritual connection between them. The petal that is beginning the transformation of the bud has a sharp angle that is seen again in the corner of one eye on both of the figures, which connects the development and growth of the people and nature. Aguilar created this unity between Black people and nature to explore healing from colonialism and enslavement. Specifically, they’re centering Black transgender identity and the growth and healing beyond gender identities and heirarchies imposed by white people. It’s a beautiful piece that uses warm colors and swaying, soft brush strokes to represent the path forward. There must be healing for those, both people and nature, who have been harmed.

Finally, in the Sculpture court is Sarah Pado’s ’22 “Getting ready for Bed.” It is a portrait of the artist and her partner in pencil on paper. They are in a bathroom near the sink, where she’s drying her face with a towel and he is brushing his teeth. In the foreground of the drawing is the perspective of her partner, with her back to him and his hand on her shoulder. In the background is the mirror reflecting them. The scene depicted is one of everyday domesticity, but the gentle touch on her shoulder makes it intimate. In the mirror his eyes are shown to be looking at Pado, and so both the inclusion of his perspective and what is given through the objective perspective invites the viewer to take the place of the person expressing the affection rather than the one receiving it. This gesture shows how important small moments of romantic connection can be for those involved, whether they are the displayer or recipient of affections, for romantic relationships.

These are just a few of many works on display in Jewett, and they don’t even cover all of my favorites! If you need a study break, have some spare time, or are taking one last walk around campus before you leave for summer break, you should definitely visit Jewett to see all these works. 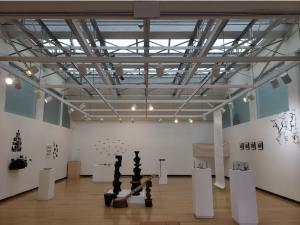