The Harvard Women in Computer Science group hosted its second Women Engineers Code conference (WECode) at Harvard University on Feb. 7 and 8. The event was packed with keynote lectures, lightning talks and workshops.

The conference was created to build a community of women engineers and to address one of the main problems of the field of computer science (CS): the gender gap.

One of the co-coordinators, Harvard senior Emi Nietfeld because it brings women into the spotlight as leaders.

“I think that it’s really important to see that I’m not alone, and there’s lots of other women who work in tech. Nietfeld said during a break on the night of the conference. “It’s important for guys to see more women in charge and in leadership roles.”

At Wellesley, professors are used to working with mostly female students. But Nietfeld explained that, for some of the male professors who helped out, it was a new experience to be amongst mostly women.

Nietfeld described an anecdote from one of the male professors at the conference, who made a comment about being disoriented at the conference with all women. However, this feeling also prompted him to consider how his female colleagues felt in a male-dominated field.

Wellesley first-year Jacqueline Young  believes that the conference was still relevant and interesting even to students at Wellesley because it offered new experiences.

“We don’t experience so much of the male-dominated part of CS. The conference really gave me a taste of reality and what I should be preparing for when I go into the workforce,” Young said. 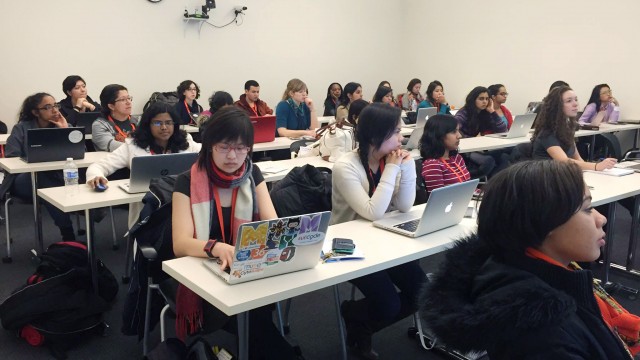 The event also offered corporate sponsors the important opportunity to get a new view of women in engineering.

“I don’t think that all of the problems with gender inequality can be solved by an organization (WECode) partnering with something, but I do think that we have a lot to offer these companies. And they have a lot to offer us. It’s a valuable lesson to send to women studying engineering: that companies want to hire them,” Nietfeld said.

Young also believes that hiring women is important in CS related fields because it can only improve their potential.

“I think it’s really important because half of the population are women and most of the products that computer scientists come out with are directed at women. And if you don’t have women in the field to create these products it’s not going to reach the potential that it has,” Young said.

Although corporate sponsors were an important part of the event this year, the event’s original founder, J.N. Fang ’16 of Harvard, explained the primary focus of the conference was not to be a career fair, as the similar Grace Hopper conference is.

“I saw a need to have some sort of gathering of people who are interested in promoting diversity in technical fields rather than more professional networking,” Fang said.

Last year, those who participated in the conference tended to be from the Northeast, but attendees from this year came from 42 different schools, including Stanford and the University of Virginia. Wellesley and other Seven Sisters schools were strongly represented at the conference.

Wellesley student Victoria Angelova ’18 served as one of the ambassadors for the conference and publicized it at Wellesley. She found the workshops and programming on Sunday to be very helpful.

“They teach you some technical skills, but also how to behave in an interview and how to prepare a resume, and I really like that,” Angelova said.

The event had three keynote speakers throughout the weekend: Donna Sarkar from Microsoft, Marie-Louise Kirk from Goldman Sachs, and Parisa Tabriz from Google.

Angelova felt that Sarkar’s speech in particular was very inspirational.

“She talked a lot about how women should behave to attain the goals they have. It wasn’t specifically CS related, it was more like what the field is and how the circumstances are in the field and what women should do to advance,” Angelova said.

The second speaker, Kirk, also addressed the issue of how to succeed in the job industry.

“Her whole speech was based on the fact that succeeding in the workplace and succeeding in real life is very, very different from succeeding in school. She talked about how we shouldn’t concentrate so much on attaining perfection more on learning from our mistakes, and that making mistakes is something very normal. She also talked about validation and how women shouldn’t base our lives or base our work experience on how others view our lives or how others view us,” Angelova added to sum up Kirk’s speech.

One of the things that has remained the same for both years is the sense of community and the emphasis on bridging the gender gap in CS, which in many cases, reinforced each other.

“The issue of the gender gap in CS and related fields is personal to a lot of us, and it will take a lot of us to change it. I think the more that we support each other, help each other become aware of the issue, motivate each other to recruit more people and make the environment better the more likely there is to be change in this field,” Fang said.

Young certainly felt the positive effects of the community and its impact on her job search.

“The women there really mean it when they say they like supporting other women. You would think that it would be a little bit competitive because we’re trying to fill the same positions and internship opportunities, but I found that a lot of people suggested opportunities that I could apply for,” Young said.