The Leaky Beaker was founded in 2011 after the contract between the college and Wellesley Fresh was adopted, therefore excluding the new cafe from accepting flex points as a form of payment. However, the contract recently expired, thus permitting the college to move the Leaky Beaker under Wellesley Fresh’s contract and allow students to use their flex points to make purchases. All students are required to be on the meal plan, which includes breakfast, lunch and dinner options. With this plan, students are given $50.00 worth of flex points, which they can use as a method of payment by presenting their OneCard. Flex points are carried over from one semester to the next. If students run out of points, they can purchase additional ones.

Tyger explained why the Leaky Beaker did not previously accept flex points as a method of payment.

“Another way to look at this is that flex points are not actual money,” she explained. “[Flex points] are a benefit we provide to add extra value as an extension of the board plan rather than limiting it to just the dining halls.”

Tyger went on to offer an example of why flex points were previously incompatible with the Leaky Beaker. “Consider it sort of like a gift card for Wellesley Fresh Dining Services. It would be like trying to use a Starbucks gift card at a Chipotle. This would be the same as the previous setup for the Leaky Beaker where it was Wellesley College and Wellesley Fresh Dining. They are two completely separate entities.” 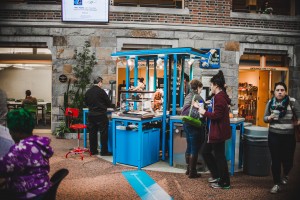 A Wellesley student waits in line at the Leaky Beaker. Photo by Adrianna Tan ’19, Staff Photographer

The students had a large role in making this amendment come to fruition. According to Tyger, the change was made in response to the passionate feedback and consistent lobbying from the students.

“The college leadership for dining, Jeff Dubois and Corinne Frazer, worked directly with Wellesley Fresh to respond to this feedback and incorporate the change into the contract renewal for the current year,” she explained.

Assistant Vice President of the Budget, Financial Planning and Campus Services Jeff Dubois, explained that one of the challenges faced in making this amendment was that the Leaky Beaker had been operating at a deficit ever since it was established and the college was financially supporting it so that the cafe would remain open.

“This was the major concern with accepting flex points at the Beaker – any loss of cash sales essentially makes the deficit larger for the location,” he said.

However, Dubois noted that students had been pushing for this amendment, and the college decided to accommodate their efforts.

“We have decided to move forward with the hope that the increased flexibility may help drive volume at the location, potentially offsetting any lost cash sales from the transition,” he said.

Despite the financial risks, Dubois believes the new Flex Points policy will benefit the Wellesley community.

“This] is a change that is not without financial risk but we’re optimistic that it will be a positive one for all players in the long run.”

Thus far, students have reacted favorably to this new policy change as it is particularly beneficial for those who have back-to-back classes in the science center and cannot go to the dining hall for lunch. 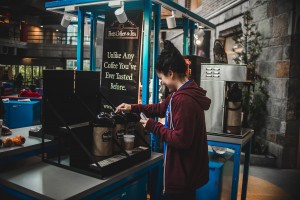 “It’s basically like opening up another little dining hall because we’re using meal points to get food, so it’s making it easier for students who are really busy with the sciences to get food,” Caroline Martin ’18 said.

Furthermore, even for those students who don’t have to grab lunch on the go, it is convenient to have another location on campus that accepts Flex Points. “

I think it’s great to have [more] places on campus [that accept Flex Points], especially for East Side. [Flex Points] can be used to get snacks or get coffee, and I think it’s a great change,” Isabella Holland ’16 said. Holland added that it’s advantageous for her to grab food at the Leaky Beaker without having to worry about the cost of the purchase.

“I think it’s important for students to treat themselves to Peet’s Coffee or the snacks they have here. Flex points grant you that accessibility. If you’re stressed out one day, it’s good to have a place to study and not be burdened by the cost of that,” she remarked.

Martin agreed that the Leaky Beaker’s new acceptance of Flex Points allows students to save more money. “I don’t like having to spend money on campus honestly because I feel like we pay enough for the meal plan,” she said. “I think [this change] makes it more equal for everyone on campus to be able to use the resources.”