Students, faculty, administrators and Wellesley residents convened to hear the Honorable Robert T. Sherman discuss the current state of Portuguese-American relations, how he and his wife Kim Sawyer founded an organization that empowers Portuguese women with nascent businesses and his trajectory to his post as the U.S. Ambassador to Portugal.

The lecture was held on Oct. 26 in the Clapp Library Lecture Room and was full to capacity. An hour and a half of discussion and questions was followed by a reception in which refreshments were served and students could converse and in some cases snap photos with the ambassador. Mellon Foundation Lecturer in Portuguese António Igrejas introduced the lecture series, thanking those who planned the lecture before introducing Wellesley College President H. Kim Bottomly. This lecture was made possible through the Wellesley’s Spanish Department, the Andrew W. Mellon Foundation for Portuguese and the Wellesley College New Course Grant.

“Wellesley students are deeply committed to cultural awareness and learning languages,” she remarked.

Vega filled in for Massachusetts Senator Marc R. Pacheco, who could not attend the lecture for personal reasons. Vega discussed Sherman’s close ties to Boston in his introduction of the ambassador. Sherman was born in Boston, had lived two miles from Wellesley College and during that time frequented Lake Waban. Vega also highlighted Sherman’s “energy and no-nonsense nobility,” “legendary grassroots approach” and use of “a diplomacy that does not assume that we Americans have all the answers. Far from it.”

“He has set an act that is difficult to follow,” Vega said before highlighting Sherman’s efforts to reduce LGBTQ+ stigma and gender discrimination in Portugal and the European Union. Sporting a purple tie, black suit and pennant bearing intertwined United States and Portugal flags, Sherman reminisced on his fond memories of the town of Wellesley before demystifying the day-to-day life of an ambassador. As an ambassador, Sherman was appointed by President Barack Obama in April 2014, and represents and is accountable to solely the President of the United States.

Sporting a purple tie, black suit and pennant bearing intertwined United States and Portugal flags, Sherman reminisced on his fond memories of the town of Wellesley before demystifying the day-to-day life of an ambassador.

As an ambassador, Sherman was appointed by President Barack Obama in April 2014, and represents and is accountable to solely the President of the United States.

When discussing why Portuguese-American relations are crucial, Sherman talked about the president’s solution to the complexity of the world’s problems and tenuous alliances.

“Obama’s philosophy is that the only way to solve this problem is through our allies,” Sherman said before highlighting the common values of the United States and Europe and Portugal’s integral role in the European Union and as a founder of the North Atlantic Treaty Agreement. Sherman then discussed the current state of Portugal, which saw socialist and communist party gains in Parliament this month after a center-right government imposed stringent austerity measures under the helm of Prime Minister Pedro Passos Coelho. The country had received a $86 billion bailout in 2011.

Sherman then discussed the current state of Portugal, which saw socialist and communist party gains in Parliament this month after a center-right government imposed stringent austerity measures under the helm of Prime Minister Pedro Passos Coelho. The country had received a $86 billion bailout in 2011.

While the country has cutting edge biotechnology and a higher education system some say rivals that of the United States, the country suffers from lack of access to capital markets and more importantly “a lack of confidence.” 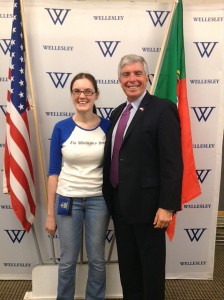 That lack of confidence belies the great strides Portuguese women have made since Portugal became a democracy 40 years ago. Women earn the majority of PhDs and MBAs and form more businesses than men in Portugal but lack mentors and are subject to cultural tensions with older generations. Sherman and his wife founded Connect to Success a year ago to combat these problems. Today, all of Portugal’s business schools and many large companies are helping dozens of Portuguese women gain the confidence and skills needed to build their startups by giving them free workshops and mentoring opportunities. Connect to Success recently earned the European Diversity Award in the Supplier Diversity & Inclusion Program of the Year category.

Sherman is also well known for his motorcycle-riding campaign for the Transatlantic Trade International Partnership (TIPP), a law he says will immediately give Portugal $1 billion in GDP revenue and 40,000 new jobs. TIPP is meant to lower barriers to international market entry for small and medium-sized businesses by eliminating tariffs and inconsistent regulations. Sherman partnered with embassy members, reporters and a local Harley Davidson club and rode to local businesses to discuss their experiences with buying and selling foreign goods.

Before becoming an ambassador, Sherman served as the Assistant Attorney General of Massachusetts and various law firms throughout his career. He helped fundraise over $500,000 as a member of the 2008 Obama campaign’s National Finance Committee. After turning down an Obama administration job because he didn’t want to relocate his family from Boston to Washington, D.C., Sherman accepted the ambassador post because his wife could live with him abroad while managing Connect to Success.

When asked how Wellesley students can enter a career in the federal government by The Wellesley News, Sherman emphasized that students should consider areas they may be interested in before applying for internships offered at the U.S. Department of State, USAID and other federal organizations, whose summer applications tend to be due in the fall and winter.

“Find out what you want to do and kick the tires,” Sherman said, adding that working at the Department of State gave him an unprecedented opportunity to work with diplomats, military officers and intelligence offices who make great sacrifices to promote U.S. interests abroad.

Sherman also told the audience to always remember the value of a Wellesley degree when applying for federal jobs and internships.

Siena Harlin ’18, who is considering a career in the U.S. Foreign Service, was grateful to have learned Sherman’s experience in working for the State Department.

“I really appreciated how he and his wife stepped up to help Portugal lift off—not only have they worked to increase Portugal’s role in the global scientific community, but also how they’ve cofounded a mentoring program for Portuguese women entrepreneurs!” Harlin said, adding that Sherman gave an appealing overview of life in the Foreign Service.

Madeline Wood ’19 had expected the lecture to cover the history of American-Portuguese relations and was pleasantly surprised to learn about Sherman’s philosophy and the current state of Portugal.

“He mostly spoke about the valuable, untapped potential Portugal holds and his responsibilities as ambassador. I enjoyed learning about his political philosophy, which went something along the lines of ‘America is still evolving and can learn from other countries like Portugal.’ He drew some interesting parallels that augmented the rapid progress Portugal has made compared to America,” Wood said, adding that Sherman’s example of the legalization of gay marriage in Portugal especially resonated with her.

Rosemary Dodd ’18 found the experience an inspirational one.

“Although I’m not a Portuguese student at Wellesley, I’m studying Spanish and am curious about working with the State Department in the future. Having a sitting ambassador give a talk at my school about how he feels that his work makes an impact was motivational and illuminating, especially hearing about how his embassy engages with Portuguese women,” she elaborated.