Hundreds of Wellesley alumnae, faculty, administrators and students gathered on the Wellesley campus on Oct. 23 to celebrate the public launch of the Wellesley Effect campaign. Wellesley College’s last major campaign raised $472.3 million and ended in 2005. This campaign aims to raise $500 million and will end in 2019. According to the campaign microsite, there are four priorities: Intellectual Community, Affordability and Access, A Sense of Place, and 21st Century Impact. The campaign launch that occurred last Friday was an event in which the Wellesley Effect was celebrated and cherished. A MobileBooth for StoryCorps, an oral history non-profit organization, was stationed outside the Physical Plant to document stories that capture the Wellesley Effect.

After registering at the Anderson Forum of the Lulu Chow Wang Campus Center, guests moved to Tishman Commons for a welcome luncheon. The guests then walked to the Alumnae Hall auditorium, where StoryCorps CEO and Wellesley alumna Robin Sparkman ’91 moderated a panel of four distinguished alumnae and one current student to discuss the meaning of and their experiences with the Wellesley Effect.

“Courage, conviction, resiliency and confidence” is the Wellesley Effect, reflected panelist Janet Hill ’69, who went on to receive a Master of Arts in mathematics from the University of Chicago Graduate School in 1972 and run a corporate consulting firm until 2010 after attending Wellesley College.

Panelist Rocío Ortega ’16 had a different take: the Wellesley Effect is the “capacity and community to find your voice,” Ortega remarked, as she told her experiences of being in a minority and a first-generation student. 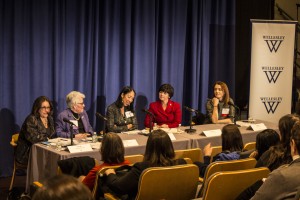 Afterwards, the guests separated into five different panels, with topics ranging from “Innovation in the Liberal Arts” to “Thought Leadership and the Op-Ed Project.” The panelists comprised of Wellesley professors and faculty, with the exception of the panelists in “Student Stories Illuminate the Power of the Wellesley Experience,” who were Taylor Cranor ’16, Karrisha Gillespie ’19, Sarah Hucklebridge ’17, Alexa Rodriguez ’17 and Hannah Ruebeck ’16.

At night, the guests dressed in cocktail attire and reconvened at a gala in the Dorothy Towne Field House, which was transformed with lights, curtains, a large Wellesley logo model and other decorations. Linda Wertheimer ’65, a Senior National Correspondent at the National Public Radio, moderated the dinner. A video of alumna Hillary Clinton ’69 played; she apologized for not being at the campaign but thanked her classmates for supporting Wellesley.

During the dinner, Provost and Dean of the College Andrew Shennan announced the campaign goal of $500 million, of which $335 million has been raised in the past three years during the quiet phase. The college received a record donation of $50 million by two anonymous donors that is included in the final figure, which will go toward the new “College to Career” initiative, as part of the 21st Century Impact priority. The initiative aims to prepare Wellesley students for their future careers by connecting students to resources and the alumnae network from the day they set foot on campus. It is a “comprehensive reinvention of our career services function,” Shennan describes. “It will reimagine how we introduce the world of opportunity to Wellesley students over their four years on campus and help them find and pursue the careers of their choosing over the course of their lives.” 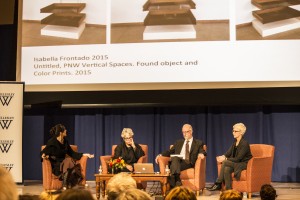 On Saturday, the campaign launch event resumed at the Dorothy Towne Field House for breakfast and welcome remarks were given by Lulu Chow Wang ’69. Afterward, Vice President for Resources and Public Affairs Cameran Mason ’84 moderated a panel of seven prominent Wellesley alumnae for a lightning round of leadership talks. From discussing how Wellesley gave students a “profound sense of self-confidence and the moral compass,” as described by panelist Alison Chung, or the ability to “think big,” as described by panelist Julie Levison ’98, each of the panelists reflected on their time at Wellesley and how their college experiences shaped their lives.

After breakfast, the guests broke off into different alumnae-led panels focused on the topic of leadership in various fields, including STEM, public service, government and business. At noon, students and alumnae returned to the Dorothy Towne Field House for a final luncheon. The President of the Wellesley College Alumnae Association, Georgia Murphy Johnson ’75, gave the welcoming remarks to the luncheon, during which students were encouraged to network through a 45-minute game in which students and alumnae shared their life stories and asked each other questions. Professors Stacie Goddard of Political Science and Thomas Hodge of Russian concluded the event by giving speeches to share with the audience various lessons learned and words of advice.

As the event came to an end, alumnae, faculty, administrators and students embraced, wishing words of encouragement and saying their goodbyes. Although they all follow different life paths and have different stories, everyone was united by one commonality: the Wellesley Effect.

“It is a special place,” Clinton remarked about Wellesley College in the video. “It helps women discover our talents. It gives us the freedom to set our own paths. It shows women that when we work hard and stay true to our values, there’s no limit to what we can achieve. That’s the Wellesley Effect.”