Last week, to the dismay of many students, paper cups were absent from their usual spot next to the coffee on the various dining halls across campus. According to a sign posted in Bates Dining Hall to explain the absence of paper cups this weekend, students must request paper cups from the dining hall workers during lunch and dinner but can use them as normal during breakfast. The number of cups used in the month of September was equivalent to 2.5 cups per student per day, or a total of 161,000 paper cups.

Dining hall worker Juliet Sander ’19 pointed to the unexpectedness of the new policy.

“No one told me beforehand. I was just as surprised as everyone else,” she said.

Word of this policy change spread quickly. Miranda Curtis ’19, like many students, noted that she first became aware that the cups were gone through the social media app Yik Yak. Food representatives from dorms on campus, who attend meetings of the Dining Services Advisory Board (DSAB), were unable to answer questions about the new policy, which is so recent that the board has not yet had a chance to discuss it with representatives. 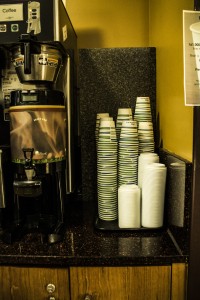 Some students have speculated that there is an environmental reason behind these changes.

“I have definitely noticed garbage cans and recycling bins filled with them in the mornings and between classes. Also usually I see people using two cups at a time for their coffee, instead of just one,” Curtis said.

Curtis continued in this vein by echoing widespread concerns about how paper cups contribute to the waste produced on campus.

“I had definitely noticed a lot of waste…Having the cups there made it very tempting to use them to bring food back up to our rooms, and many people left the dining halls with many cups in their hands – most of which were probably only half full,” Sander said, confirming the waste that other students had noticed.

“Those cups most likely went into a landfill. If we keep trending like we are as of now we will hit a usage of approximately one million cups by the end of the year in the dining halls,” Cherie Tyger, Resident Director of Food Services, said, confirming the problem of waste created by the constant use of paper cups.

“We couldn’t in good conscience continue to let so many paper cups go to waste when it is unnecessary. I don’t think students really had any idea of the volume that was being wasted so we felt it was important to share impact of their decisions.

Curtis said that the policy change hasn’t made a major impact on her life.

“To be honest, it hasn’t affected me that much. It’s definitely less convenient than using my own mug, but that’s a pretty small change to make,” Curtis said.

Although paper cups are not left out for students after breakfast is over, mugs are always available. This does cause a problem for students with back-to-back classes, however, who may not have time to stay in a dining hall while they finish their beverage. Students who do not have time to linger in the dining halls also have the option of bringing their own thermos or water bottle to fill and bring with them. However, this is not possible for students eating in Pomeroy Dining Hall, which is kosher and does not allow outside containers. 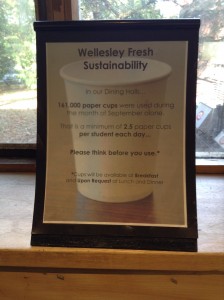 “The [plastic] cups need to be cleaned and put back more often because we often end up running short on those since everyone is using them now,” Sander said, commenting on how the policy has changed operations in the dining halls. However, she continued on to explain that the staff in the dish room has no problem dealing with the increased volume.

“[Paper cups] also represent a huge amount of money which could be used more usefully elsewhere,” Sander said, repeating the other main concern regarding the cups that she had heard in the dining hall.

“When reviewing the numbers for the month of September it became blatantly obvious that we were purchasing a huge volume of disposable cups over prior years. The numbers were quite shocking to us,” Tyger said. “A cup costs about $0.05 and a lid costs $0.03,” Tyger said, mentioning that this year so far has had the highest usage of paper cups to date. She went on to say that they will continue to monitor cup usage in dining halls to see if the campaign is successful.