On Oct. 30, students across campus received an email from Interim Dean of Students Adele Wolfson announcing that Residential Assistants (RAs) and House Presidents (HPs) would be receiving stipends in compensation for their work beginning in the 2016-17 academic year.

The decision to provide stipends for student leaders is the culmination of years of concerted efforts by students, staff and administration. Compensation for student leadership roles has long been on the radar of the College, but had been held at bay when put through previous budget cycles.

“RA and HP compensation has been an issue every year that I have been here. I think that the working group was able to provide enough compelling evidence to see that this was important,” Director of Student Financial Services and Financial Aid Scott Wallace-Juedes said.

The Student Leadership Stipend has also seen popularity in College Government in recent years, gaining student support for using funding to provide compensation for RAs and HPs. Each year, College Government reserves $11,000 to support a project that students run for during elections. Past ballot initiatives have gone towards the Student Leadership Stipend, which has run in an effort to show senior staff that paying students leaders has been a priority for students, even if at the expense of campus events.

A committee of students and administrators was put together by Wolfson to create a new comprehensive proposal for student leadership funding for RAs and HPs.

“We wanted to put together a proposal that you just couldn’t say no to because it made so much sense,” Katelyn Campbell ’17, a member of the committee assembled to draft a revised proposal, said.

The new proposal includes a clear delineation of the expectations of RAs and HPs.  A closer look at the roles fulfilled by RAs and HPs revealed that Wellesley student leaders already do a great deal of work in comparison to parallel student leader positions at peer institutions. 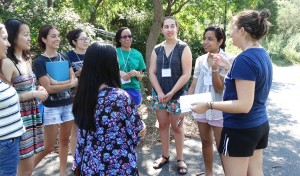 “The duties for RAs and HPs were never enumerated before. What are RAs doing right now?  What are other RAs at other schools doing who are making a comparable amount of money? What we found was that Wellesley RAs are doing more, in terms of number of tasks, than at other schools; it was just never written down before,” Campbell said.

Campbell believes that the concrete contract drawn up for RAs and HPs that this proposal granted was a great factor in its eventual approval.

“As with any job, if the responsibilities aren’t laid out, people are not able to be held accountable.  I think really the main thing that pushed this through was that if they are paying a student to perform this duty, the student will be providing the services that they signed on for the college,” Campbell added.

Campbell noted that HPs and RAs’ responsibilities will be adumbrated in further detail this year.

“The real change is that the roles of responsibilities of RAs and HPs are clearly spelled out. RAs will have to have regularly posted office hours, so that there is at least one person in a hall with office hours each day,” Campbell said.

While the proposal has gone through many iterations, this is the first time that it has been approved by senior staff for allocation in the budget.

“Last year, a committee of students and administration worked on creating a proposal for student leadership funding for RAs and HPs put forth a proposal that went through the regular budget cycle for approval by senior staff in late February and early March. In that budgeting process, senior staff was not able to find funding for the project, put thought it was an important a priority,” Associate Dean of Students Carol Bate said.

While the budget cycle usually places such decisions in February, the stipend proposal was expedited to late October to parallel the timeline of the RA and HP selection process. It was deemed important that the details of the stipend were made available to students before they applied for these positions in February.

“It was realized that this decision would impact recruitment if it waited until the next budget cycle, and thus was considered off-cycle, in November, prior to the RA and HP selection process,” Bate said.

Wallace-Juedes believes that the decision to approve the Student Leadership Stipend before the budget deadline attests to the diligence of the senior staff and the proposal’s importance.

“The fact that senior staff approved the proposal before the annual budgeting process speaks volumes to their commitment,” Wallace-Juedes offered.

Compensation for work as RAs and HPs will be distributed as a stipend, which will be paid in four installments throughout the year. The portioned payment ensures that students can pay for textbooks and other items at the beginning of each semester.

“The reason that the committee decided to put forth the proposal for a stipend was so the check would come to the student and the student can then decide what to do with it, maybe to pay off tuition to buy books, maybe for other expenses that she has, but she has the control,” Wallace-Juedes said.

Other options considered included credit towards the college’s Room and Board fee. However, student feedback favored compensation in the form of a stipend, as it was more tangible than other forms and would be felt equally by all students.

“If [compensation] were a credit towards her account, if the student were not on financial aid, it would reduce the amount their parents are contributing. For those on aid, one option was that the credit would reduce their aid. For these students, there would be no change for them, whether they were receiving it through aid or through stipend,” Wallace-Juedes said.

The stipend comes with the hopes that this would allow a wider cross section of students to apply for the positions. Students who may not have believed that they could filled such positions due to the unpaid hours of work will now have the opportunity to fulfill these student leadership roles.

“One of the things that can be challenging at a place like Wellesley is to ensure that students from all economic backgrounds have a shot at the opportunities that Wellesley provides,” Wallace-Juedes said.

Bate hopes the stipend will encourage an even more competitive pool of RA and HP applicants, one that is more inclusive of various socioeconomic backgrounds.

“Some students could not be afford to be RAs [previously] because it takes time and there is no compensation. Because of this, perhaps part of the pool is missing in terms of [socioeconomic] diversity,” Bate said.

A large push for the RA and HP compensation came indirectly from Wellesley’s peer institutions.  Wellesley is one of the last schools of its size to offer some version of a stipend to student leaders.  References to other schools with similar leadership positions helped make the case that the stipend was necessary.

“Nothing about the proposal was kneejerk or emotional; it was driven by data. Wellesley is one of the few institutions that didn’t provide any sort of compensation. Could we create a system that would provide a financial incentive for aided and non-aided students? Otherwise you end up with a system that has no benefit to students on aid; it may even mean that they have to work even harder,” Wallace-Juedes commented.

“I think there is some value in the volunteering aspect; it is great training ground for future communities. But RAs and HPs contribute a vast amount to student life and the student experience. It is an important recognition of the contributions they do make. Part of this was working on balancing the financial impact with student needs,” Wallace-Juedes said.

“Paying uncouples the importance of volunteer work and service work. It is entirely proper to be paid for service work, and it is false to think that this is the only way to be. There was a time when perhaps money wasn’t the same issue it was currently, so the volunteer aspect could be emphasized without money in play, but that time is over,” Leach said.

While Wellesley had relied on this spirit of volunteerism for quite some time, students have been vocal about student leader compensation in recent years.

“The difference in the past five or six years is that students have really been asking to be paid. When students stand up and ask for it and compete with other funding opportunities for other projects, I don’t think there was a way for Wellesley to concretely close the door and say no,” Campbell added.

The proposal is a manifestation of many voices and hours put in by supporters.

“It’s been a collective effort between students, the administration, and senior staff. President Kim Bottomly returned $11,000 from the ballot initiative in support that the decision was made in good faith. This is something that the campus can take credit for, working together collectively, and that feels good,” Bate concluded.