On behalf of the six organizations in the Harambee House, which are Ethos, BlackOUT, Black Women’s Ministry, Minority Association for Premedical Students, Wellesley African Students’ Association and Wellesley for Caribbean Development, Ethos’ Political Action Co-chairs, Sydney Stewart ’18 and Serenity Hughes ’18, presented a list of demands to Senate this week.

Stewart and Hughes also presented the list of demands to President H. Kim Bottomly, Provost Andrew Shennan, Dean of Admission and Financial Aid Joy St. John and Interim Dean of Students Adele Wolfson on Dec. 8, 2015 with a request that they respond by Dec. 18, 2015, which they honored.

Given the protests at The University of Missouri in the fall of 2015, Stewart and Hughes felt that they had to join in and be a part of the national movement. They emailed all of the members of the Harambee House saying they wanted to write a list of demands and asked interested students to join them. The list became a collaborative effort among the group of students. 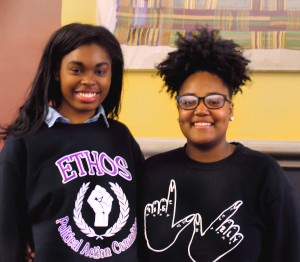 “I have a lot of black friends at Mizzou. And they were planning a date in which each college would have a demonstration so that it would be a national uprising of some sorts. So when they told me that, Sydney and I thought, ‘Yeah, this is the best time to do it.’ […] If there’s a national uprising, then we need to join in,” Hughes said.

According to Stewart and Hughes, the demands have been carefully researched and explained, each with a justification and a deadline. Although they have not yet been released to the Wellesley College community, they will soon be posted on Ethos’ Facebook page and are published in The Wellesley News Multicultural Column. Most of the demands concern representation of students of African descent on campus, both in the student body and in the faculty.

As mentioned in the demands themselves, out of the 362 full- or part-time faculty members at Wellesley, there are only 12 tenured or tenure-track professors of African descent, most of whom teach in the Africana Studies Department.

“The black professors in the Africana Department basically make up the majority of professors of African descent on campus. So it’s just kind of insulting. It is like the college is saying ‘African and African American history is all that you can teach,’ ” Hughes said.

Ni’Shele Jackson ’19, a member of Ethos’ Political Action Committee, thinks that the demands are especially important because the community often doesn’t consider the different experiences that black students on campus might have.

“People think that academia is this gigantic safe space for everyone, and I don’t like the fact that people are so comfortable with that idea. It kind of negates a lot of experiences that students of color, but specifically black students, have here. […] We live more complex lives here, […] we experience different things. […] I don’t think that a lot of people think about that just because we share the same space,” Jackson said.

Provost Andrew Shennan says that Ethos’ demands are reasonable and made it clear that the administration plans to take actions to implement them.

Dean St. John, who also spoke to students at the Taxi Cab 1969 demonstration, said that the Office of Admission and Student Financial Services are taking steps to increase the diversity of incoming classes through certain initiatives.

“Achieving this goal requires close collaboration with other campus stakeholders, including faculty and students. Student organizations, like the Harambee House groups, make great partners in our work, and we appreciate students’ commitment to working with us on this important priority for the College,” Dean St. John said.

“When they set up the meeting last week, I thought, I’m not preparing anything. I’ve done all that I am willing to do. First off, we shouldn’t have to submit a list of demands in the first place. So when I come to this meeting, it’s your time. You tell me what you’re going to do. You should be

ashamed that we have to do this in the first place,” Hughes said.

“They count a lot on students to be the initiators, which I feel puts a lot of pressure on us, rather than them consciously thinking of ‘How can we make our black students here more comfortable, more represented or more empowered?’ I feel like that onus is all on us,” Jackson said.

What is most frustrating is that this issue is not new for the Wellesley administration, commented Stewart and Hughes. Multiple other organizations on campus have presented demands in the past, which the administration also did not fully address.

“Wellesley has a history of student activism and multiple [organizations] have presented multiple demands and those demands, a lot of them have been recognized, but a lot of them also have not been recognized. […] WAAM-SLAM II, they presented a list in spring 2014. A lot of our demands are very, very similar. Even though we’re of different backgrounds in terms of our race, we all desire the same things, and Wellesley continues to fall through on those things. […] There will be conversations between students and the administration, and those conversations will just be a one-time conversation, and they won’t follow up,” Stewart said.

Stewart notices that even though there are members of the administration dedicated to students of color on campus, many of them are people of color themselves.

“Just going to the Commission on Ethnicity, Race and Equity (CERE) meeting today, it seems like there are those faculty members who are dedicated actually to making sure that we as students of African descent and also students of color have a good experience on this campus. But the thing is, the makeup of CERE, most of those people […] are actually professors of color. [There were two white people in the room.] Everyone else, and there were about 10 or so people from the administration, was black or Latina. So it’s interesting also that there’s only a certain brand of administrative workers who actually seem to be dedicated to the cause of making our lives better,” Stewart said.

Shennan acknowledges that there are multiple groups on campus that have similar demands to those presented by Ethos and agrees that there is work to be done. He hopes that the students and the administration can continue to work together to address inequities for all students on Wellesley College’s campus.

“There are still inequities in the experience of students here that we should be addressing. […] None of us would want to perpetuate inequities in the experience of a Wellesley education. If we can find a way to address them, we should! And one thing I would say is that when we received the demands from the Ethos group, we were very mindful that there are other groups of students at the College who feel that they also have experienced inequity or even racism. So while we want to be receptive to this particular set of student demands, we don’t want to ignore the fact that there are others. We have to bring these together into an overall approach to increasing diversity and inclusion at the College for all student groups,” Shennan said.