“It’s important to remember the historical ties of the Asian and black community and how we have supported each other in the past, and should continue to do so in the future,” Christy Bae ’19 said. “We [also] thought it was important for those in the Asian community to understand that being people of color did not exclude them from perpetuating racism.”

The committee noted that discussing issues of racism and discrimination can be difficult and thus wanted the panel and discussion to be an open space where students were able to ask questions and challenge their preexisting beliefs.

“We wanted the keynote panel to be a space where Asian/Asian American students could hear from other activists/organizers about why confronting anti-blackness within ourselves, our families and our communities is so important and to understand that this is not an individual process, but something that we have to do together as a community,” So-Yung Mott ’18 said.

Suññatā M-K Fung, one of the panelists, is a board member of Slow Food NYC, an organization “that works with diverse communities on sustainable eating and urban farming practice.” Fung continuously fights for maintenance of mental and physical health in themselves and in others and has worked with a variety of organizations in New York City to create peaceful, healthy communities reflective of diverse needs.

The committee members chose Suññatā as one of the panelists because “of their work around the arts, documentary film, and food and healing justice,” So-yung said. “Because they organize outside of nonprofits, we thought they would have greater insight into what that work looks like. We also wanted to highlight the connection between Black and Asian communities that often gets overlooked/erased – how there are biracial and multiracial individuals [like Suññatā] that are a part of both communities.”

The second panelist, Kabzuag Vaj, was born in Laos and came to the United States as a refugee when she was just a child.

Now, she is the founder and coexecutive of Freedom, Inc, “A non-hierarchical collective of multiracial, intergenerational, multi gendered, and differently abled Hmong, Black and Cambodian leaders,” Khan said. “[The organization] addresses root causes of gender based violence through centering queer, youth elders femme and women folks.”

Vaj was chosen for her insight on the ties between Southeast Asian and Black communities. Additionally, she has extensive experience with organizing which started at a very young age as she began to look around her community and notice that certain things simply did not feel right.

“If you’re not privileged to that knowledge or that information [and don’t have the terminology for injustice], you still understand what injustice feels like,” Vaj said.

Fung’s passion for social justice also began early in life, partly because of the home they grew up in, and partly because they soon came to understand that people were treated differently simply because of what they looked like. As they grew older, they began reading, researching and engaging in a lot of critical consciousness work on their own. This is what lead them to develop an interest in examining internal prejudices and forms of oppression within themselves and within others.

“There’s so much emphasis on the external conditions [associated with oppression] that I noticed people weren’t really taking enough time to be mindful of what was going on internally,” Fung said. 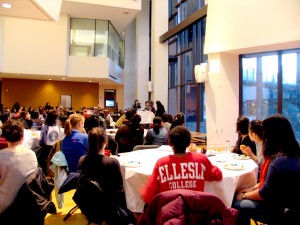 The panelists continued the discussion by giving more specific examples of the type of social justice work they engage in and exploring what it truly means to be in solidarity with a group of people and with a cause.

“The speakers made critical and fundamental points about the fact that we as Asians or Asian Americans, and I am speaking as a South Asian American, cannot keep trying to relate experiences of pain and suffering or the same forms of racism, because they are really not comparable experiences,” Mariya Patwa ’16 said. “I really thought [those] points were important. I think that what I really agreed with was that you can never fully relate and you shouldn’t have to in order to be supportive or act in solidarity.”

Once establishing how important it is for Asians and Asian Americans to establish relations with those in their own community, both speakers then went on to highlight why anti-blackness is an issue Asian-Americans should care about.

“If black folks aren’t free, then no one is free,” Fung said. “In order for us to have a new world and be more human human beings…we need to engage in fighting anti-blackness.”

Ultimately, the organizers of Asian-Awareness Month said they hope that this event will inspire more dialogue about issues of anti-blackness in Asian communities both on Wellesley’s campus and in broader communities Wellesley students are affiliated with.

“[This issue] is something we’ve avoided talking about for too long,” Alice Liang ’16 said. “It’s on the responsibility of Asians to acknowledge this and address this within themselves and their own families, so we don’t continue to perpetuate anti-Blackness. I’m so glad to have had a space in our talkback on Friday to continue the conversation from the panel, and I know it’s also continued on in personal conversations. I hope we can build better connections between communities of color on campus, that Asian students can show up better in solidarity with other students of color going forward.”