Given the rise in application fraud, several international Chinese students at Wellesley have had to employ additional services to verify their college applications.

Fraudulent college applications come from all around the world, including the United States, but China has drawn recent notice in this regard, given recent economic growth and an emerging educational consultant industry in China.

Linda Liu ’19 is one international Chinese student who used the services of several firms to validate her application and increase her chances of gaining acceptance at Wellesley.

“I’ve heard of many, but have never known one actual, real-life case. What could convince me that application fraud exists is the massive cancelling of SAT scores in Hong Kong, Singapore and Korea,” Liu said.

The College Board last month canceled scheduled SAT exams in testing centers throughout China because of suspicions that some students had seen the test itself in advance. While these events didn’t affect Liu herself, she said that her friend experienced a major setback.

“My close friend, who has high moral standards was accused by the [College Board] of cheating in her SAT exam, and her score, which could have helped her apply for a better school, was on hold for months, until they went through all essays and stuff she submitted and decided that her score was real. This process took so long,” Liu said.

With China’s middle class growing rapidly in recent years, demand for American universities from Chinese middle class families has also spiked. Chinese students have studied abroad in the United States for many years, but the number rose by 60,000 students in the past decade to reach a total of 300,000 Chinese students studying in the United States last year, according to the Associated Press.

A new industry for educational consulting is currently expanding in China to assist Chinese students in the application process for elite American colleges.

Some colleges and universities around the United States have changed their admissions policies to include a video interview in response to these dishonest processes in order to improve the selection process and disqualify frauds. 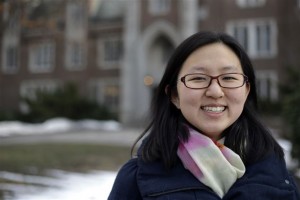 Linda Liu ’19, from Beijing, had a video interview element to her application. Photo courtesy of Associated Press.

During her application process, Liu used the services of InitialView, a Beijing-based company that conducts verified interviews of a student applicant and sends video recordings of this interview to the student’s selected schools.

Liu also relied on an educational consulting boutique company, also based in Beijing, called Elite Scholars of China (ESC) during her application process.

Wellesley alumna and CEO of ESC Stacy Palestrant ’94 cofounded her company in 2010 after she and her husband discovered that many Chinese students were unprepared for the U.S. college application process while conducting student interviews for their respective alma maters.

Unlike Initial View, ESC assists students throughout the entire application process, from building a list of schools to conducting SAT test preparation. Palestrant emphasized that not only does ESC prepare students for the application process, but that her company also prepares them for the academic challenges of American universities.

“When they go off to college, they do really well,” she said, after highlighting the intensive writing and additional preparatory college courses ESC also provides for its students.

Outside of ESC, a significant number of educational consulting firms in China engage in dishonest practices to help their students gain acceptance in the competitive application process for top American colleges and universities, according to Palestrant. These practices include plagiarized personal essays, stand-in test takers and illegally purchased transcripts.

“I’ve heard plenty of horror stories from my students when they talk to me about what their friends go through at other companies,” Palestrant said.

“In fact, I’ve heard about agencies that don’t even give students the password to their own account. So the agency wants to keep the student locked out of their application because they don’t want the student to modify anything…That’s also partially because when the acceptance letters do come in, they may charge the family an extra amount for the success of, say, getting a student into a school.”

As for Palestrant’s own company, ESC personally reaches out the international admissions representatives at each U.S. school to highlight which students they have helped in the application process, which has in turn, helped admissions boards verify valid applications.

At Wellesley, ESC has assisted a significant proportion of international Chinese students in the application process.