Wellesley College has its share of folklore, including a collection of ghost stories and legends about almost every building on campus. A popular LiveJournal post, which details several of the most common Wellesley legends, actively feeds the interest in ghost stories. Among the most prominent are the stories of the suicide suites, the Beebe ghost and the lake walk proposal.

Dulce Gonzalez ’16, house president of Beebe, described the story of the Beebe ghost.

“There was a [Beebe] sixth floor with a trap door that lead to it. The house president lived there and started acting erratically. She apparently committed suicide in that room, but evidence later suggested that she had been abducted,” Gonzalez said.

LiveJournal sources further claim that the student was taken or possessed by a woman in black. One post stated that “one night her friends heard something, and they got worried so they ran upstairs to check on her, and she was gone — disappeared forever. But on her desk there was note which read ‘The woman in black from one one will come again. Run, run.’”

Gonzalez herself has never seen the ghost, but she has not ruled out the possibility.

“I’ve never experienced anything, but first and second floor tenants have said that their rooms could be haunted. I do believe [in ghosts], but living on the fifth floor, I prefer to think that this one doesn’t exist,” Gonzalez said.

There is indeed a trap door on the fifth floor of Beebe, but Gonzalez still isn’t convinced. “I just think that’s how people get to the roof,” she said.

One of the more popular Wellesley legends is that of the “suicide suites,” the name given to a series of underground rooms in Tower, accessible only through the tunnels. Maggie Calmer ’18, a resident assistant in Cazenove, tried to explore the suicide suites her first year.

“We went through a weird hallway with graffiti all over it and eventually we came to a staircase, where, at the top, there was a weird green door. We tried to open it, but it was locked,” Calmer said.

The backstory that Calmer was given matched the strange aura of the place.

“I’ve heard that in every group of girls that lived there, at least one would commit suicide every year. Apparently, one year, a girl went crazy and tried to kill someone else. The rooms housed custodial staff for a while but eventually were shut off. People would explore the rooms and report that furniture was being moved,” Calmer said.

LiveJournal claims that a student was driven mad after her mother started to summon spirits that followed her to Wellesley. She eventually attempted to kill someone else living in the suites. According to the post, “No one wanted to live in that hallway after that because the memories were too traumatic. The hallway was sealed off and all the doors locked.” 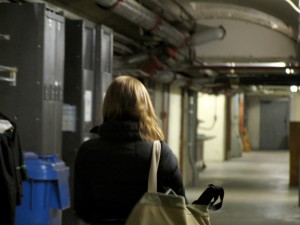 Calmer does not believe in ghosts, but that does not prevent her from seeing truth in the story of the suicide suites.

“I’m sure it’s true that a lot of girls committed suicide there. [The tunnels] were dark, gross and decrepit. Something was making those girls go crazy. It could have been a domino effect,” she said.

Olivia Lafferty ’18 believes in spirits and claims to have seen them on Wellesley’s campus. A resident of the quad for two years, she believes that both her first and second year rooms have been visited by shades.

“I’ve seen a shade who would come to my window all throughout October. There was also a woman with a Victorian bun who would sit at my desk. She seemed like someone who was studying. Sometimes they like to play jokes. I thought my roommate was waving at me from our room in the quad and when I came up, no one was here,” she said.

She does not know if any of these shades are connected to a specific haunting in Wellesley’s mythology, but she has reason to think that they are not.

“I think hauntings are referring to vengeful stories. I haven’t encountered those, but I think that spirits are more frequent here that people think. The benign ones are around. Everywhere I go there’s something, but they’re not really that scary,” Lafferty said.

The jury is still out on the truth behind Wellesley legends, though they certainly comprise an important part of the college’s culture. Lafferty does not necessarily believe in the legends, but she does not see the harm in them.

“I think [ghost stories] are a way to get our kicks in an isolated area. I think it’s fun and benign, as long as we don’t disturb anything,” she said.

“I think that Wellesley legends are really fun and cool. I like how my older friends passed the story on to me when I was a first year. It’s like a humorous legacy,” Calmer said.

Gonzalez agreed, saying “I think ghost stories give the college character. It just makes it a little more cool; it makes it seem like the history of Wellesley is a little more with us.”

Jenn Harris ’19 added a lighter spin to the story. Her aunt and cousin, both Wellesley alumnae, told her the legend of Lake Waban.

“I think that [the legends] are really fun. It’s one of the cool things about going to Wellesley,” she said.  “So apparently if you walk with your significant other around the lake three times, they have to propose or you can throw them in. My aunt told me that in her junior year, her boyfriend convinced her to take the walk around the lake, and when it started raining, they went back to her dorm in Severance, and he proposed. They’re still married to this day,” Harris said.