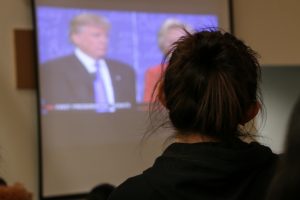 Media outlets predicted an audience of 100 million people, making this debate the most viewed in American History.

The candidates put forth different narratives of themselves as well as their perspective on the U.S. trajectory. Clinton touted her extensive political experience and acumen, while Trump emphasized his outsider status and Reaganesque economic policies. Clinton focused on raising taxes on the wealthy to revamp the nation’s electric power grid and invest in renewable energy. She advocated for a higher federal minimum wage, equal pay for men and women and paid family leave. Trump discussed China’s currency manipulation in international markets, offshoring of wealth and the United States’ trade deficit with China and Mexico, whom he argued “are using us as a piggy bank.” He then highlighted the manufacturing jobs leaving midwestern states and argued for what Clinton later termed “Trumped-up trickle-down economics,” or lowering taxes on wealthy individuals and corporations. He advocated renegotiating trade deals like the TransPacific Partnership (TPP). Both candidates promised to reduce regulations for small businesses.

Tensions arose in the final hour of the debate. Clinton portrayed Trump as an unsuccessful businessman, criticizing him for his $650 million in debt and his history of constant bankruptcy at the expense of others. In a personal moment, she said, “I’m certainly relieved my late father [a small businessman] never did any business with you.” She chastised Trump for not releasing his tax returns and for being dismissive of the North Atlantic Treaty Organization (NATO) and other U.S. allies. She implied he was callous for his statements against women and those of other races and socioeconomic statuses.

Trump discussed Clinton’s deleted emails and status as a technocrat with a history of bad judgment and incompetence in office. There was likewise daylight between the candidates on race relations and policing: Trump portrayed himself as the “law and order candidate,” while Clinton advocated gun control and police retraining to reduce systematic racism in communities. During the talkback, the professors listened to questions and comments from the audience before tackling them. Students raised concerns about the rhetoric surrounding free trade in the debate, Trump’s status as an atypical Republican nominee and how debates influence voter behavior among non-politically active moderates and third-party voters. 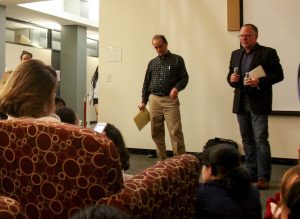 Burke noted that millennials, one-third of whom are voting for third-party candidates, have a key role in this election, and discussed Clinton’s troubles with African American millennials. He noted that debates are typically watched by politically active individuals loyal to their party. Burke argued that “low-information voters…are the most interesting group…perceptions of the debate… solidify a few days later when the media line solidifies.”

Lindauer pointed out that “there is this massive pushback on free trade, globalization and multinational immigration,” but U.S. trade imports represent only about 6% of the U.S. economy. He noted that crucial economic issues of tepid economic growth spurred by low productivity and private investment and the ballooning costs of entitlement programs like Social Security were not mentioned during the debate. He attributed the rise of Trump to his ability to tap into the feeling of economic disenfranchisement among the white working class, who are exhibiting a “wave of antiglobalization sentiment.” Lindauer cautioned that while these people’s concerns are legitimate, “more low-skilled people have lost work to advancements in techonology than any foreigner.”

Belt noted that historically, debates aren’t important because “most people have made up their mind by now… for the people who haven’t made up their mind…turnout depends on whether the election is seen as important.” He encourages students to keep in mind the power of candidates’ reliability and personalities in voter behavior and to examine social media, ads and late-night talk shows to gain an understanding of how the media evaluates debates. 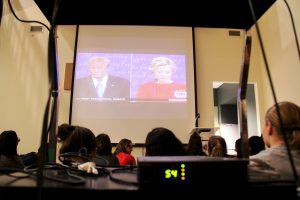 Clinton is the first female major party presidential nominee in U.S. history. During the Democratic primary, she bested Senator Bernie Sanders, whose grassroots progressive message inspired a large millennial turnout. A President Trump would be the first businessman since fellow Republican George W. Bush. Clinton and Trump are historical candidates because of their ages and if elected would become the second and first oldest president at their inaugurations, respectively. The oldest sworn-in president is currently Ronald Reagan, who was less than one month shy of being 70 years old in 1981.

Two presidential candidates were declined the opportunity to appear on the debate stage. The Commission on Presidential Debates (CPD) established a rule in 2000 that only lets individuals with 15 percent of the national vote in an aggregate of five polls join the debate. Some have criticized the CPD for setting too high a bar for third-party candidates. Libertarian Party candidate Gary Johnson and Green Party candidate Jill Stein earned 8.4 and 3.2 percent of the national vote. Johnson and Stein could add oxygen to their campaigns by joining the second and third presidential debates after strong poll gains.